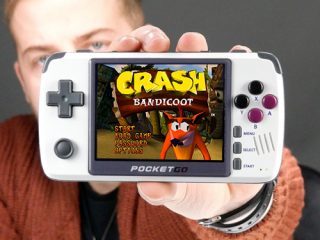 The Bittboy Pocket Go V2 is aimed at those that want an affordable portable handheld that can play a wide number of ROM’s through emulation. All you need to do is install ROM’s onto an SD card, pop it into your handheld and you’re ready to start playing your favourite retro games. It plays most of your old school consoles for example: Gameboy, MAME, FBA, SNES, NES, Gameboy Advance, Sega Genesis, Wonderswan, Gameboy Color and even Playstation 1.

How Does The Bittboy Pocket Go V2 Feel?

The Bittboy Pocket Go V2 has a JZ4770 Dual-Core 64Bit – 1.00Ghz processor, which is powerful enough to play most of the emulators it advertises. On the front of the handheld you have your large 3.5″ IPS display that also features the logo which we unfortunately don’t like, there’s no real need for this, it’s just to promote itself. The D-Pad and ABXY buttons are fine, nice feedback, great size, and well placed. The new addition to the analogue stick is nice, it’s recessed into the handheld, some call it an analogue “slider”, it’s a bit stiff, but a couple weeks of gameplay and it’ll loosen up for you.

One of the nice things about the Bittboy Pocket Go V2 is the addition to four shoulder buttons, many of the best handheld consoles lack this, which doesn’t help especially if the handhelds can play Playstation 1 and N64 games. These triggers work great, they do their job, although, those of you with very large fingers may accidentally press the power button occasionally, it’s located close to the L2 button so it may take some time to get use to, but this is very much a minor issue. The speaker is very, very loud too, great for those of you that might be sound impaired, but it’s a basic speaker, one that’s seen in almost every $50-$100 retro handheld.

The back houses the 2000MAH battery which can keep you going for a good 6 hours, it’s not a massive amount of power we will be honest but it keeps you playing for hours. Just remember to bring a USB-C cable (which is included) when going on your next trip away. Bittboy was nice enough to send us out a custom Bittboy Pocket Go V2 which features our logo on the back, but unfortunately they’ve printed it upside down. It’s not just us either, many other content creators received theirs upside down, so it looks as if the person who was in charge of the printing really screwed up! So we advise going with a blank battery pack should you order one. It’s small things like this that frustrates us with these Chinese handhelds, they miss out or screw up on the small things that matters, and that’s why they’ll be forever known as “cheap Chinese handhelds” but that saying, every year they keep getting better and better.

Since the original Bittboy Pocket Go, this version has had a massive upgrade to its hardware and they’ve honestly done a cracking job. The size is extremely comfortable to play on, the buttons are well placed and it’s somewhat a slim handheld so it weighs very little, making it perfect for your pocket… hence the name.

The previous Bittboy played emulators well, apart from Playstation ROMS and the lack of N64 emulation was unfortunate. If you’re looking for PSP and N64 emulation then we advise checking out the Gameboy 1UP XL, it can play all the ROMS you desire. The Bittboy Pocket Go V2 can play a wide number of games, and now, it can even play Playstation 1 ROM’s fairly well.

The user interface is the same as most Chinese retro handhelds, for example the LDK Game Horizontal and the Retro Game 300, you have your main settings, pre-built games and then your emulators which open up your ROM files. The main menu looks a little dull, and there’s no real way to neaten it all up, you just have to deal with it.

We played all that the Bittboy Pocket Go V2 had to offer. We were most excited about playing Gameboy Advance ROM’s and can confirm they play incredible well. This handheld for us is the Gameboy Advance Pocket, it feels and looks as if it was make back in the late 90’s. Neo Geo, SNES, NES and all of the other older games play well too. No frame rate drops, no screen taring and no slowed down music. Everything works as if it should. The main reason we picked up the Bittboy Pocket Go V2 was to play PS1 ROM’s, For 2019 this is the biggest “want” of them all from retro gamers. 2019 introduced a couple that could just about power them, and now towards the end of the year and early 2020 we are getting $50 handhelds that are trying to pull it off.

The Bittboy Pocket Go V2 can emulate Playstation 1 ROM’s fairly well, we tried and tested it playing over 10 different PS1 games. 8 out of 10 of those games performed very well, but while playing two of them we did notice some frame rate drops and even a full blown crash. So, even though it advertises PS1 emulation it may not be perfect for a very small percentage of games. That aside, it played the likes of Crash Bandicoot brilliantly and can comfortably say you’ll have a lot of fun playing PS1 games on the go with this thing. We thoroughly enjoyed playing the best neo geo games and best wonderswan games whenever we want, wherever we want.

Because it’s not the most powerful processor on the market, and for obvious cost cutting reasons it will not play N64 or PSP games. If that was the case, the Bittboy Pocket Go V2 would have a considerably high price tag. Bittboy has wanted to keep this cheaper than the Retro Game 350 because it knows it can’t outperform it, plus it’s coming out months later, so it already has the upper-hand. But for those of you wanting to play all of your old retro games, the Bittboy Pocket Go V2 will play them darn well, with very little problems.

The 3.5″ IPS screen is a delight to play on, the colours pop and the brightness is strong. Combine that with the comfortable controlLers, and four shoulder buttons and you’ll be having a heck of a time on the bus playing your games. For those of you new to these Chinese handhelds, yes they save. You can open up the emulators menu to save, change settings, add cheats and even change the screen ratio should you want to play stretched, normal or scaled.

The Bittboy Pocket Go V2 is a great handheld. We’ll admit, it’s not as good as the Retro Game 350, but it’s currently $30 cheaper, opening it up to a much broader audience. Currently it is on sale, but retail states it could possibly go to the same price tag as the RG350, which if it does, is a big mistake for the Bittboy Team. But, if it stays below the $60 mark we think it’s worthy of a pick up, and it will keep those happy that can just about afford it.

It emulates well, even if some PS1 games are a bit flakey. The build quality is superb for a $60 handheld, and the large 3.5″ screen makes you immersed on the go. It’s slim, light weight and extremely portable, more portable than any handheld under the $100 that can play PS1 games. It’s a great product, and Bittboy should be proud, even if some things such as the upside down sticker, small L2/R2 buttons and lack of customer services holds it back. Bittboy are slowly becoming the best company around to make affordable retro handhelds, but we just hope that they don’t raise the price anytime soon, as that will push customers towards the much better Retro Game 350. But as of now, it’s a great affordable handheld that will proudly sit in our best retro handhelds display stand.

Update: As of 5th May 2020, Bittboy has revealed an all new Metal Pocket Go, that has a new aluminium shell, better analogue stick, upgraded DPAD and a whole new aesthetic. It’s available on RetroMimi for $109.99 and ships on the 31st May 2020. It’s a direct competitor to the RG350M, and we’ll update you once we receive a unit to compare.