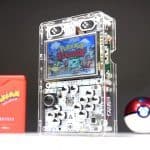 The Gameboy 1UP is no ordinary handheld. Imagine the Gameboy Colour on steroids, and that’s exactly what you get with this incredible monstrosity by GBZ Mods. The original Gameboys are by far some of the most well known portable gaming machines of all time, and still to this day they are being collected and purchased by a wide number of casual gamers, but it’s missing something that is becoming highly requested, hence why we are seeing lots of consumers wanting to Pimp their Gameboy themselves.

Because this is happening we are finding a lot more businesses out there selling pre-made and custom handhelds ready for gamers to pick up n’ play. One of the popular ones this year is this, the Gameboy 1UP XL, a large portable handheld that can emulate almost every retro console you can think of, even N64 and PS1 games near perfectly. It’s so good it was actually featured in our best retro handhelds list.

The Gameboy 1UP has a very unique look to it. Its transparent shell, and two handed play makes this thing stand out like a sore thumb. On the front it features a large 3.5″ HD IPS wide-angle HD display LCD screen with 60-FPS image quality, which we might add is absolutely stunning. Below you have chrome buttons everywhere, alongside a well built analogue stick. For those who are big fans of the D-Pad, we feel your pain, but the buttons for directions aren’t that bad.

Below that you also have a couple of LED’s that indicate bluetooth connectivity and your battery power. On the back you are greeted with even more chrome buttons, these are the shoulder buttons which are placed where they have to be, admittedly it’s not the most comfortable location, but its the best you can get on a square handheld of this structure. Adding a curved back like the Retro Game 300 will add unwanted thickness, and this is already pretty darn thicc.

On the side you’ll find four USB ports which allow you to add controllers, and an ethernet port to get your nerd on if you want to start installing and adding your own software etc. On the top the Gameboy 1UP features a 3.5mm headphone jack, on/off switch, volume wheel and a HDMI port. This HDMI port allows you to plug it in to your TV, and when teamed up with the controller USB ports you can turn this thing into an actual home console. How dope! Oh and obviously your micro-usb on top too for charging, we would’ve liked USB-C but we can’t have everything!

The Gameboy 1UP aesthetically is a very large handheld, one not fit for children, this is something aimed towards adults who want to spend a long period of time on a handheld. The shell is quite blocky, some would say unfinished but that’s what keeps it’s transparent techy look which we really dig. The square edges and faceplate does make this thing some what awkward to hold, but you do get use to it, it’s in no way comfortable, but it’s not annoying to hold. You can play this for hours on end without a problem, but you may find getting to the shoulder buttons a bit strenuous now and then.

In terms of what we think could be better on the exterior of the Gameboy 1UP there’s not a lot. The only thing we did notice after a few weeks of using it is the weight. This is no light handheld coming in at around 500g… yeah that’s HALF a kilo. So chucking it in your back pocket is impossible without showing your bum to everyone in the streets. This is 100% a games console that you chuck in your bag, and although it is portable it’s one you think about taking out when you’re going on a bus journey, or a stroll through the park.

How Does The Gameboy 1UP Perform?

The Gameboy 1UP XL uses a Rasberry Pi 3B+ a very reliable piece of kit that can handle most ROMs that we’ve chucked at it. It uses RetroPie so the software installed is incredibly easy to use. The load time takes a good 15 seconds to get through the opening but once you’re into the menus it’s as simple as clicking on what emulator you want to use. It can play most retro games on consoles such as Gameboy, PS1, N64, Neo Geo, SNES, NES, Dreamcast, Game Gear, Commodore 64, ATARI, Wonder Swan, PSP and more.

We first played around with the Gameboy Emulator and it performed great, No hiccups, silky smooth and we just absolutely loved playing Pokemon on a 3.5″ handheld, plus the save feature was super easy to use, and loaded with 0 problems, which is what you want… from a $250 handheld, right? We then tried the classic SNES and NES emulation, again, flawless, but that’s expected as these ROM’s can be powered by a potato.

Then we took a look at the N64 Emulation, and to our amazement it worked. This is one of the first times we’ve played N64 games on a handheld, and we were blown away by the moment. The fact we could pull out this handheld on the train and start playing Pokemon Stadium made this handheld worth it for us. It worked incredibly well, with 0 frame rate drops, the saturated screen was a pleasure to play on and the analogue stick helped a bunch with shooting games.

We then moved along to PS1 emulation, and although it wasn’t perfect it was 100% playable. 2D games worked perfectly but when you move onto large 3D games like Spyro you will notice some frame rate drops now and then. We still enjoyed playing Spyro and Croc on this thing, but it’s no where near perfect. For those wanting to play the large PS1 games you might be frustrated by the imperfect emulation, but for those of you playing the smaller 2D games, it’s absolutely fine.

Overall, should you pick it up?

That’s a tough question, and it all depends on your budget. This is a product aimed at someone who wants to invest in an incredible handheld that will last time for years to come. Once you buy this, there’s no point picking up the smaller handhelds such as the LDK Horizontal or the Bittboy Pocket go, because you have the king of handhelds right here. For us in the long run it actually saves you money, as you’ll no longer need to buy a bunch of $50 handhelds to try and find a decent one, but the size, weight and lack of superb PS1 emulation might put you off.

It’s a sublime handheld, playing Pokemon Stadium on the train never felt so good, and the large screen, shoulder buttons and analogue stick made pick up and play oh so easy, just remember to bring a backpack when you want to take this thing out.