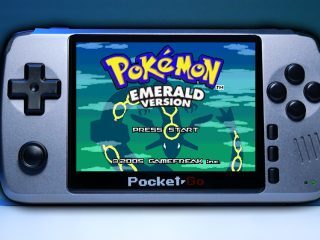 If you’re a fan of Bittboy and some of the best retro handhelds on earth, you’ll certainly be wanting to take a look at the new metal Bittboy Pocket Go. It’s an all new take on the V2 that they launched in September of 2019, and although there’s no major internal difference it’s undoubtedly feeling like a whole new handheld console.

It’s available to buy on RetroMimi for $109.99, and will be shipped as of 31st May 2020. Expect 2 – 4 weeks delivery. Click here to buy. UPDATE: There is only limited pieces in the first few batches, order quickly if you want one in June/July.

What Is The Metal Pocket Go?

The Bittboy Pocket Go V2 ranked very highly in our best handhelds of 2019. It’s a handheld console that can emulate a wide number of old school games, such as the best Gameboy Advance games, Playstation 1 games and even your best Sega Genesis games.

It’s an affordable, high quality product that we rank highly due to its ease of use, and comfortable build quality. It’s easy to set up, great to look at, has a stunning screen, and comes with enough shoulder buttons for you to play PS1 games properly.

It’s slim, lightweight and comes with enough power to emulate everything below and including PS1 games incredibly well. Where it beats its competition is due to the smaller price tag, at $65.99 for the plastic version it’s an unbeatable handheld within this price range and perfect for newcomers in the emulator scene.

But if you have a larger budget the metal Bittboy Pocket Go is a recommended upgrade, as it keeps it’s stealth aesthetic but this time with an aluminium shell.

The metal Bittboy Pocket Go has the exact same specifications and internals as it’s predecessor.

Why Should You Upgrade To The Metal Edition?

Secondly, some customers had issues with the d-pad sticking, although when we tested two of the Pocket Go’s we didn’t have this issue it did exist in some handhelds. They have also fixed this, so you’ll have the newer more reliable D-PAD in this unit.

Furthermore, the new metal Bittboy Pocket Go now has a reset button! Originally, this wasn’t a thing, so when your game froze, or you wanted to reset the only way to restart your console was to turn it on and off. Now, they have added a reset button. We’re not sure how they forgot about this in their first units, but hey, better late than never right?

And finally, aesthetically the metal Bittboy Pocket Go looks far more “bad ass”, with the dark grey aluminium shell, the removing of the text, and the black screen border, this games console looks as if Darth Vader has owned it.

If you know your handhelds then the first thing that comes to your head is most likely “should I buy this over the RG350M”?

A great question, and one we find quite hard to answer.. The RG350M is still our favourite Chinese handheld to date, the RG350M simply beats it because of the two analogue sticks, that’s it!

The metal Bittboy Pocket Go feels slightly more “finished” than the Retro Game 350. The RG350 still has text above the start and select, whereas the BPG doesn’t and this alone makes it seem more stealth and premium-like.

But then, we can then argue that the metal Bittboy Pocket Go has poor speaker placement, because from time to time we found ourselves blocking it with our right thumb. It’s the incredibly small features that will push you over once side of the fence.

Straight off the bat, the metal Pocket Go is $20 cheaper than the metal Retro Game 350. But the RG350M has a completely different layout with not one, but two analogue sticks.

Each have very similar CPU power, so gameplay wise they both perform near identical.

It all comes down to what you like the look of, and whether or not you want to save $20. Don’t forget the RG350M also comes in a stunning rose gold variant, whereas the metal Bittboy Pocket Go just has a dark grey variant for now.

For our full review of the Bittboy Pocket Go V2 we suggest reading the old review, as the internals are completely the same. This review is simply going over the new form factor.

We love it. The metal Bittboy Pocket Go is a phenomenal handheld, and the addition to the aluminium body makes it feel like a legit product that Nintendo themselves have made.

It’s not perfect, no way. The analogue stick is low quality, the speaker is located in the worst place possible and it lacks an extra analogue stick.

But what it lacks in features it makes up for in overall design. This thing is incredibly well polished, the removal of text, all black buttons and the new logo with a black border makes this thing look fit for James Bond himself.

We actually prefer the look of this, over the RG350M, but it literally comes down to the $20 price difference between these two kings of the handheld world. You choose.