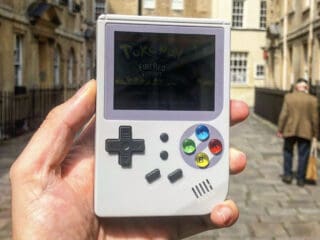 The Retro Game 300 is a handheld that has been getting a lot of hype lately, and although we were a little late to get hold of one, we have a few things to say about what could be one of the best retro handhelds around, but it does have some flaws.

The emulator world is becoming more and more competitive by the day, companies are seeing a demand for these handhelds at the Retro Game 300, also known as the RG300 has finally adding a couple of things which many retro handheld enthusiasts have been asking for, for some time now.

And this is all because high competition, means more upgrades, and better pricing for us customers.

So, why is the Retro Game 300 so good, what problems does it have, and why do the buttons look like they’ve been designed by a 5 year old? Time to discuss.

The Retro Game 300 has a very Gameboy Color feel to it, thick at the bottom and thin on top, this is due to the handheld adding in two very good shoulder buttons.

The shoulder buttons are perfectly placed and provide no stress on the fingers after play, it’s located just above the 1800MAH battery, which we might add lasts a very long time, the Retro Game 300 is one of those handhelds that you chuck in .your bag, and a week later you’re surprised that it still has power.

On the bottom we were surprised to see a USB-C port, this is where you charge your device, and next to it is a headphone jack.

It comes with an SD card slot obviously and one of the worst volume wheels we’ve ever seen on a handheld. The volume wheel goes from 0% volume, too LOUD with just the slightest of movements.

Now, this could just be our unit, but this is what we have experience, we can’t seem to find a “quiet” setting on this, and even after day one, we had complains by our partner asking us to turn it down in the living room. The speaker is incredibly loud which is a good thing, but prepare to have loud volume, or nothing at all.

Before we move onto the front of the Retro Game 300, we want to quickly talk about the size of this thing. It’s the perfect sized handheld for adult in our honest opinion.

Yes, the LDK Horizontal and the Bittboy Pocket Go are small, and fits the hand but this here is the perfect size handheld. It has that “good grip” stance to it, there’s no awkward way to hold it, and our giant hands just fit comfortably on the handheld at all times.

The front of the Retro Game 300 is where it starts to go down hill a little bit, and we have some sections to touch on, but most of it is personal preference.

It’s kept the Gameboy aesthetic which we absolutely love, the D-Pad is great, soft, flexible, and responsive. The start/select and reset buttons are pretty basic, low quality buttons, nothing special. The ABXY buttons in our opinion are vile, and it’s our personal peeve with this handheld.

Why they decided to add what looks like Times New Roman font within the buttons is beyond us, and it ruins the whole retro look of this device.

Putting that aside the buttons feel and work fine, and the Retro Game 300 comes in a few designs, grey, black and a SNES edition which we have.

Overall the handheld feels great in the hand, the chunkiness works perfectly for adults, and the thickness has allowed them to add a large 3″ screen for you to play your retro games and the best gameboy games of your collection.

The screen isn’t perfect, it’s bright, high contrast, strong colours but some of the viewing angles are poor, but you could argue that a cheap screen allows for the price to be smaller.

But with a $50 price tag, this isn’t the cheapest on the market, if anything it’s an average price for these things.

The Retro Game 300 spec wise, has 528MHZ CPU, 128MB RAM and 16GB internal memory, all while using Opendingux, so it’s highly customisable OS allows for you experienced ROM players to do as you wish with the software.

It also supports a wide range of games, such as PS1, Neo Geo, GBA, GBC, GB, SFC, FC, Mega Drive, SMS, GG, Poke Mini and a few more. So yes, this handheld can most likely play the retro games that you desire.

We are very impressed with how the Retro Game 300 handles emulation. Even when we were running Spyro on the PS1 emulator, it was still clocking in at 40FPS, and although it wasn’t silky smooth the game itself was playable, and emulated what it felt like back in the day incredibly well.

Even SNES, NES and Sega emulation ran flawlessly, with only a few hiccups throughout the day. The Gameboy Advance emulation on some games like Pokemon wasn’t perfect, we noticed a bit of screen tearing in Fire Red which made it slightly annoying to play, but for those that don’t worry about it, you’ll be fine.

Response rate on the buttons is perfect, and the large screen made playing RPG’s a blast, the save states work, and so do some cheat codes too, which you can get to by pressing the brightness and reset buttons at the same time.

Because these handhelds are such a new product and only recently have china and companies started to pursue it, the software and OS is still aged, and feels like something from the early 2000’s.

It could be confusing for customers newly introduced to the emulation scene, and may require some tutorials, but it is as easy as inserting and SD card with ROMS on, going to the emulator and selecting the file.

But, yes, we’d always like new update UI in these handhelds, but we won’t be getting that anytime soon.

Overal Opinion Of The Retro Game 300

If you’re after a large retro handheld that can play most of your ROM’s perfectly the the Retro Game 300 is for you.

Its large build means playing for long periods of time actually enjoyable, not like the annoying Pocket Sprite.

The shoulder buttons are the best we’ve felt, the screen is OK, the buttons we can live with, but most of all, the emulation is near perfect, and we haven’t reviewed a handheld to this emulation standard in this price range… ever. It’s one of the the best handhelds for $50, hands down.