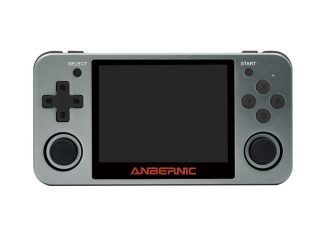 The RG350M is by far one going to be one of 2020’s best handhelds, and still to this day, the original RG350 is one we highly recommend and use on a weekly basis. As of today, it has got a bit of an upgrade, because they’ve now released metal variants and let’s just say it now feels like something Nintendo has made.

The RG350M is the same in almost every way to the Retro Game 350, but for those of you that are new to this handheld, let me explain what it is and what it does. The RG350M is one of the best retro handhelds around, and can emulate a wide majority of old school games. Simply download ROMs onto an SD card, pop it into the RG350M and it will then play them for you in silky smooth FPS without any kind of screen tearing or problems. Below is a list of consoles it can emulate:

Anything newer than the Playstation 1 and it struggles. The CPU inside is a 4770 dual 1.0 GHz, with 512MB RAM, and 16GB internal storage. If you want N64 emulation, then this handheld is not for you, perhaps the Gameboy 1UP will work for you. But if you are looking for PS1, Gameboy and Sega emulation, then this is literally one of the best handheld consoles you can get.

The RG350M is by far one of the better looking handhelds to come out of China and with it’s small upgrades to the exterior, it’s only gone and became better than the original RG350. It’s a direct competitor to the Bittboy Pocket Go V2 which some may argue is better looking, but that’s plastic, just like the ODROID Go Advance which was released in February. But none of these companies have took the risk to go metal, and that’s why Anbernic, the company behind the RG350M are beating everyone in the field, because they take risks, and update their handhelds regularly.

The main selling point of the RG350M is the fact it has four shoulder buttons and two analogue sticks, making PS1 emulation feel incredibly fluid and natural. Across the face of the RG350M you have all of the necessity buttons to play your retro games. In the centre you are greeted with an upgraded 3.5″ IPS display with a resolution of 640×480. It’s only a small upgrade, and some would say useless, it does give you a few extra pixels over the previous version, but in the long run that effects battery life slightly. It’s bright, has great viewing angles and provides crisp visuals even in the most pixelated games.

The only downfall with this display is that it has huge “ANBERNIC” text across it, but that can be solved by buying a custom display from SakuraRetroModding on Etsy for $10. They have slightly upgraded the shell to a more curved, comfortable structure, and they have made slightly smaller analogue sticks, because as mentioned in our previous review, they stuck out… a lot. You can see how flush it sits in the image below compared to the old variant further down the article.

On top of the RG350M you will find all of your ports, you have mini HDMI out, a headphone jack, two USB-C ports for charing, and adding controllers, plus your shoulder buttons. On the bottom you have your speaker grills, which are out of the way of your hand (finally), your SD card slots, and a reset button. One of the SD card slots is for the software (included), the other is for your ROMs.

On the back there is nothing special, just some logos, and grip points. The RG350M in the hand feels great, it’s the perfect size for adults to have fun with, it’s not going to cramp up your hands, the screen size is perfect so you don’t find yourself bringing it closer to your face and the analogue sticks for us, are perfectly placed. We know some of you would like the D-PAD switched around but hey, we’re happy with its current placement. The placement is in fact different to the original, as you can tell by the image below, originally the analogue stick and d-pad were switched.

The RG350M is a versatile beast that has become one of our most reliable handhelds to date. Once you get past the awkward looking UI and have started up a game, you then get to experience the real power behind the handheld. It’s not the most powerful handheld at this price range, but it handles Playstation 1 emulation perfectly fine, with very little hiccups. It can play the best Gameboy advance games with ease and the best Neo Geo games without any screen tearing.

Inside is a 2500MAH battery that will get you 6 hours of play time out of one charge, after our testing it was more like 5 hours. It’s a large battery for a handheld of this size, and its nice to see Chinese companies starting to move to USB-C, it is 2020 after all!

It’s easy to pick up and play, the games load quickly, and once you get use to the user interface, games are simply press away. Having the ability to quickly switch from Crash Bandicoot on PS1 to Sonic The Hedgehog on Game Gear is an absolute dream. The smaller analogue sticks helps with gameplay, and the shoulder buttons are perfectly placed to smash without having to awkwardly hold it.

The CPU inside handles anything we chuck at it, and we were pleasantly surprised to see Playstation emulation running without any problems, even the audio was perfect! It’s a great little handheld, but as mentioned previous it won’t play your newer games like N64, Gamecube or Dreamcast, that will need much more power, and most likely more of your hard earned cash.

The RG350M is a seriously good handheld. The upgraded metal version comes with a few tweaks that was absolutely needed.

Like the smaller analogue sticks and the more comfortable curved aesthetic to the body. Even though nothing has happened with the internals it does feel like a whole new handheld, and we didn’t think the Retro Game 350 could get any better.

If you are looking for the best PS1 handheld around, then you are looking at it. The $169.99 price tag is steep, but if you’ve been a fan of the original for some time, I highly suggest upgrading because the RG350M just feels so good in the hand. It’s great to see ANBERNIC upgrading this handheld so quickly after its initial release.

Hopefully in the near future, they’ll upgrade the Retro Game 300 with a metal variant too. And yes, I would buy this over the Analogue Pocket, it can do so much more.