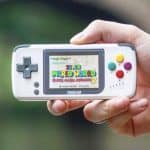 The Bittboy Pocket Go first landed on the retro scene a few years ago, starting with a pretty average handheld that could emulate a few ROM’s and built from plastic similar to what you get in a Kinder Egg.

But now after many new versions and revisions they have now launched the Pocket Go. A smaller, more compact version of their original built with precision and reliable materials.

We’ll admit, we’re impressed with what they have launched, they’ve came a long way and Bittboy are turning out new versions of their handhelds very quickly.

Something others in the market should consider because at this rate, they’ll get left in the dust. The Bittboy Pocket Go does have a competitor, the LDK Landscape which we reviewed a couple of days ago, so they’re not king of the hill just yet.

One feature of the Bittboy Pocket Go that has astonished us is the build quality. The materials used, far exceeds anything its competitors use. The plastic is strong, the shell has this slight texture to it, unlike what has previously been used on the original Bittboy.

This screen is very bright, colourful and has great viewing angles, playing on the screen is an absolute pleasure. You have a standard d-pad, start/select buttons and customisable ABXY buttons that can be changed with the included new coloured set.

To change this you simply unscrew the back, get to the front and drop them in, it’s not too hard, but just be careful not to rip anything out.

The buttons are all very responsive, and placed perfectly on the Bittboy Pocket Go. The shoulder buttons are okay, nothing special and they do move around a lot, plus the plastic used can get a bit sweaty and slippery after a while but that’s just us being picky!

The speaker is great, loud enough to hear what you’re doing and powerful enough to handle a lot of noise at once, the placement looks as if it could be a problem, but trust us, your thumb is out of the way nicely.

The sides you have a number of features, a volume rocker, your on/off switch, SD card slot, TV OUT a reset button and a headphone jack! Finally, the most underrated feature of a handheld console is an audio jack, one thing the LDK Horizontal lacks and others in the market lack.

On the back there is literally nothing. No branding, no grip, no curvature just a white back panel. We would’ve liked a Bittboy engraving of some kind but I guess this allows users to pimp it themselves with stickers or custom designs.

For those of you that are new to emulators, an emulator is basically a piece of software that can play ROMs. A ROM is known as a read only memory, a file that can basically play old retro games.

So for example you can download a Pokemon ROM, and an emulator will be able to play that perfectly… or attempt to. But to download a ROM you must legally own a copy of that game.

It emulates most ROMs almost perfectly. Especially the Gameboy ROMs which we are very happy about as that’s what we play the most.

No frame drops, but admittedly a wee bit of screen tearing (which is when the screen shows lots of zig zags and looks like the screen is being electrocuted) and no audio jitters. The only problem we had playing was Playstation 1 ROMs.

This is due to the games being 3D and needing a lot more processing power to play. We added a frame skip to the PS emulator which should help it but unfortunately it didn’t help.

The PS1 games were in fact horrendous to play, the audio cuts every second, the frame rate was averaging 10-15 frames per second and the button response time was well over a second.

We’re not 100% sure why they even added this emulator, most likely because it can probably play 2D PS1 games at a respectable frame rate, but majority of its users will want 3D games to be playable on the Bittboy Pocket Go.

It’s perfect to chuck in your back pocket, play for 20 minutes and then chuck it in your bag to catch the train, but for those of you reading who are looking to play for over an hour or two at one time, it may get uncomfortable. But again, this shouldn’t be why you are buying it.

The Bittboy Pocket Go fits great in the hand, the buttons are accessible without stress to your fingers, but the slim nature of the product might make it hard for users with big hands to get to the shoulder buttons comfortably.

Putting that aside it’s great fun to play on. It has this pick up and go nature to it which I love, and with it’s built it save states, you can load up a save, play for 20 minutes on the bus, save and chuck it on your pocket, ready for another session in the day.

The Bittboy Pocket Go is by far one of the best handheld emulators on the market.

Its compact nature allows it to be used in any scenario when travelling, the superb build quality allows us to trust the units survivability when we drop it and put it in rough situations.

It emulates most ROM’s perfectly, the speaker is just what we need and the buttons are very responsive.

Not to mention the screen is very bright, allowing you to play this outside in the sun with ease.

This retro handheld alone has me excited for what the future holds for these consoles, it seems as if companies are willing to invest a little more into the build quality knowing that they will now sell fairly well in this era.

The only downfalls we came across, and we’ll be honest, they are small downfalls but we have to mention them. Firstly we think the addition of an analogue stick would do wonders to the gameplay, admittedly there isn’t much space for it on the unit, but we’d be happy to see Bittboy make it a little bigger so that an analogue stick can be added.

Or just go any buy their updated Bittboy Pocket Go V2 for that.

Secondly, the PS1 emulator is poor, this could be most likely due to the lack of power in this thing to power such 3D games, or the emulator is a bad one, but our bet is on the power.

And finally, this is us really nit picking now but we think the packaging could do with a little upgrade.

The quality of the unit is superb and we’d like this to be reflected into the packaging, now we know this packaging is perfect for mass production, but just a tad of “wow” in the packaging will do wonders for customer respect, and this is coming from someone who has opened thousands of gaming products.

This is a handheld you buy to introduce someone to the emulation world. It’s so cheap it doesn’t matter if they lose it, break it or love it. The Bittboy Pocket Go is the perfect handheld for pocket gamers who don’t want to break the bank.

The only problem is, now in 2020, it’s getting a little outdated, but nonetheless a great handheld.