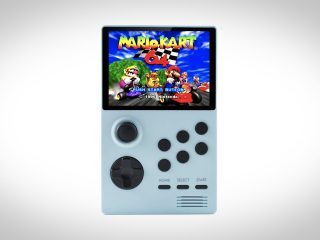 The Retroid Pocket is the official name for the Powkiddy A19 that we reviewed a few months back. That was the “prototype” handheld that was in fact, absolutely terrible, so terrible that we only gave it a score of 5/10.

But, the final edition is here and the Retroid Pocket might actually be a worthy pickup for those of you wanting one of the best retro handhelds under $100 that can emulate Nintendo 64 games. It saves waiting for the mythical N64 Mini, I guess?

So, what is the Retroid Pocket, and what can it do? Well, comparing it to the older version, a few things have changed, and for the better.

The Retroid Pocket is a retro handheld that can emulate a bunch of your old retro games using an open Android operating system. It does not come pre-loaded with games, you will have to install ROMS yourself, if that isn’t something you want to do, it might be worth looking at the Powkiddy Q90.

It’s an odd handheld, one that isn’t perfect, but isn’t awful. What makes it great, and has a one up on its RG350M competitor is the fact that it has built in WiFi and Bluetooth connectivity.

This allows you to update the software automatically without having to insert an SD card and it allows you to connect up to four wireless controllers to play with friends on the big screen.

How Does The Retroid Pocket Feel?

The Retroid Pocket is a stunning looking handheld. The pastel colours, perfectly placed buttons and the gorgeous screen makes this really pop, and gives it a distinctive look compared to the Bittboy Pocket Go V2 and other competitors.

The 3.5″ display sits flush with the whole squared design, and it somehow fits perfectly with all of the other circular buttons amongst the face, helping you concentrate fully on the game. They’ve also added a glass display, which prevents any of the heat bubbles that was in the engineering prototype.

The Retroid Pocket feels like a 1.5″ thick brick. It’s as comfortable as that sounds. They’ve obviously wanted to keep the design as it is, but this doesn’t help with the comfortability for long periods of play.

Anything over two hours and you’ll start to feel it, but even if you do want to game all day, unfortunately the battery won’t let you, as it seems to cap at around 4 hours, but we’ll go over that further on in the review.

Many of you asked us how to D-Pad felt on the prototype, and we said it wasn’t great but we digged how it looked. They’ve heard everyones thoughts and have changed it into a much more robust, natural design, allowing you arcade fans to get those trigger fingers on point.

On the very top of the Retroid Pocket it features the Micro-USB port for charging, we’re not sure why its not USB-C as it’s 2020, but it will do.

There’s a TF/SD card slot and next to that is the… headphone jack. Why they’ve put this on top we do not know, as the cable now has to go around the back of the handheld, past our hands and then to our headphones. It’s simple things like this that these Chinese handhelds seem to miss.

Nobody wants a headphone jack on top… nobody!

Next to that is the video out that allows you to connect it to your TV via HDMI. It works incredibly well, and why we rank it so highly is due to this.

The fact that we can take four bluetooth controllers to our friends house, plug it into their TV and start playing four way Mario Kart blows our mind.

Simple, yet effective, and this is something we hope all future handhelds out of China start doing, even the ODROID Go Advance can’t do this.

The On/Off button is on the left handside, which also has a small LED light next to it. They fixed this, as before it was incredibly bright and would blind anyone on the bus next to you when playing. On the right hand side is the volume buttons, which feel nice and sit flush with the shell.

The overall feel of the Retroid Pocket is nice, it’s designed incredibly well, the buttons are all responsive and clicky plus the display is stunning and really makes the handheld feel premium.

They’ve sacrificed comfortability for looks and to be honest, we don’t really mind, it’s just a shame the headphone jack wasn’t at the bottom. It’s also nice that it stands up on its own, it’s a nice addition to our desk accessories and retro gaming gifts.

The speaker grill and home/select buttons are out of the way nicely, your hand won’t get in the way and create a muffled sound.

But, and a big but at that, is that the Retroid Pocket is missing something, and that something is important, this missing feature alone almost ruins the handheld, and again this makes us think “why have they done this, and why are they cutting corners?”.

How Does The Retroid Pocket Perform?

The Retroid Pocket is incredibly powerful for its $80 price tag, in fact, nothing really comes close to it, not even the Game Kiddy 350H. When we first tested it we were impressed with what it can handle, but it can’t handle everything well… The Retroid Pocket can play the following games:

Theres a Single boot and Dual boot system, we recommend going for the dual boot, which we have linked above, as this is for those that have ROMs on a SD card ready to go which allows you to open apps and play as the handheld is already pre-configured for you in terms of UI/software.

Because it’s running Android you will need to download some open Android apps like RetroArch in order to run most of your games well.

But it does come with “Retroid” also known as Pandora’s Box that is another one of GoRetroid‘s pre-loaded pieces of software that allows you to play, download and install ROM’s.

As much as this is great, and the WiFi allows you to install ROMs, it doesn’t perform as well as the open Android emulation.

It’s also worth noting that you will have to mess around with lots of settings, ROM directories and button mapping before playing straight out of the box.

Expect 30-60minutes of setup before getting the Retroid Pocket prepared for play. It’s not a pick up and play handheld and you will need a little bit of knowledge on how to setup up ROMs with emulators before playing it out of the box.

Once it’s all setup it can handle most things you will chuck at it. Gameboy Advance, SNES, Playstation 1, all run at silky frame rates and its an absolute blast to play on if you can get over the lack of shoulder buttons.

We tested some of the best N64 games and was very happy with the performance, even though we had to take some time to map the buttons, the same goes with all of the other emulators. Larger games like Golden Eye do not perform well, we had to turn on frame jump for this, but still, not enjoyable to play due to the very low frame rates.

When you jump into your first game on any emulator, expect to play around with mapping buttons for 15 minutes until it’s perfect.

PSP and Nintendo DS is where things start to go down hill, but again, we were still very impressed. 2D PSP games worked well, even at 60 FPS, but i’s once we started pushing the boundaries of 3D games that we noticed a lack of frames, some crashes and some skipping of audio.

God of War and other large games is just a no go, you’ll be able to play on it, and probably get through a bunch of levels but it will be low quality gameplay for sure.

Nintendo DS works, and probably better than most PSP games. You can add the second screen to the top right of your screen, and with the mapping of your volume button you can switch to the second screen.

A great feature about the Retroid Pocket being Android is that with a simple hold of the home key for 1 second, it will activate mouse mode, which gives you a cursor for you to use throughout the whole handheld.

This helps with Nintendo DS games, especially on the second screen with games that use touch sensitive controls. Simply hold your home key to deactivate the cursor, press your volume key and wallah, you are back onto the main screen playing games.

This is a very nifty feature. But again, like the N64 and PSP emulation, once you start playing the larger 3D games, expect low quality gameplay and possible crashes.

The Retroid Pocket is aimed at those that want to play smaller N64 games and a bunch of old Gameboy and SNES/NES games.

The lack of shoulder buttons and the arcade button layout makes everything a little awkward to play. Especially when you’re racing against the clock to not get caught out by its small 3-4 hour battery life.

The Retroid Pocket is an awkward, powerful handheld with the potential to be incredible. It has Bluetooth connectivity, the ability to download games via WiFi and a strong enough CPU to handle Nintendo DS Games.

But the lack of shoulder buttons, small battery capacity and the awkward setup time makes this handheld feel like it’s nowhere near finished.

Yes, playing PSP games and Nintendo 64 games on a handheld like this is fun, and the ability to take this console to your friends house to have a N64 part is insanely fun. But, we just can’t give this any more than 7/10 due to the fact they’ve cut so many corners with this thing.

Add shoulder buttons, and add a 6000MAH battery and you’ll have a very popular handheld. Hopefully by the end of 2020, they’ll add this.

For those of you not bothered about the shoulder buttons and have some experience with ROMs this is certainly a handheld to consider, but its not for the average pick up and play gamer unfortunately.