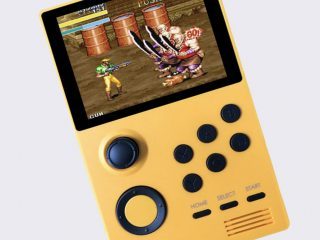 When we first heard rumours of the Powkiddy A19 being able to run Dreamcast games, we immediately had to get our hands on it. While we were searching for this handheld we received an offer to review a pre-launch version by a contact in China, and although this sounds great we refused.

Mainly because pre-launch versions in no way resemble the final outcome of the handhelds, so we didn’t want to give you false hope or any wrong information.

We take a lot of pride in reviewing these products, so we hope you understand that this review may be somewhat late. But we can confirm this is the official version available to the public that we are reviewing.

However, many content creators on YouTube did take up the offer of a pre-launch unit, and although their reviews are great, many of them blatantly missed poor features, and some even had heat bubbles on the screen that they were not mentioning, even though viewers could see it happening on camera.

That aside, here is our full review of the Powkiddy A19, a Chinese handheld that apparently has the ability to play some of the best Dreamcast games around. For those of you new to the Chinese handheld scene, these products over the last two years have been increasing drastically in popularity.

All because they have the ability to play ROM’s from a wide number of old school consoles. A ROM is simply a file that can play an old game, without a disc or real hardware.

How Does The Powkiddy A19 Feel?

This might take you by surprise but we love the appearance of the Powkiddy A19. It’s different, large, has perfectly placed buttons and one of the finest analogue sticks we’ve seen on a $90 handheld. In fact, it’s identical to that of the Nintendo Switch.

But, it does lack a few mandatory buttons, such as the shoulder buttons. Literally none exist. Why, we have no idea, perhaps they didn’t really know where to place it, or changing the shell design would have cost them too much money?

But the lack of this is very disappointing, and it’s the worst feature of the Powkiddy A19 by far, some games become unplayable because of this, that alone makes it feel like an incomplete handheld. You can configure the front buttons to be used as shoulder buttons, but that becomes very awkward to play games comfortably.

The new looking D-Pad has had mixed reviews amongst the retro community but we can confirm we love it. Admittedly, it’s probably not as effective as a normal d-pad in fighting games, but the unique design makes it look different to everything else on the market, and it flows with the black and yellow aesthetic that the console has gone for.

Even the 3.5” IPS display sits fluidly in the case, and matches all of the black buttons. This screen is plastic but incredibly crisp, playing games on this thing is an absolute beauty.

It has a resolution of 640X480, so some games will be stretched, but as with any of the best retro handhelds, you can change the resolution and scaling within the emulator settings.

Around the sides of the handheld, you have a power buttons, which is on the left side, on its own. On top is where all of your ports are, so you have your Micro USB for charging a TF/SD Card slot, a 3/5mm headphone jack (which should be at the bottom because your cable will have to go over the top, and then onto your head, which may get tangled) and a Mini USB port for TV out should you have the correct cable.

All of these buttons are black, and minimal, they’re tucked away and sit raised out of the shell, including the volume buttons on the side, something the GKD 350H doesn’t have.

On the back of the handheld, nothing, which we like. The Powkiddy A19 feels okay in the hand, it’s not as comfortable as a horizontal handheld like the Retro Game 350 or Bittboy Pocket Go V2, but it’s comfortable enough to play for long periods of time.

Our hands didn’t get strained, because well, you don’t need to force your fingers onto the non existent shoulder buttons and the facing buttons are all perfectly positioned. Finally, the audio quality is average, it’s not great, because it’s a generic stereo speaker, but it does the job just fine!

The Powkiddy A19 is a very powerful handheld, it has a Mediatek 6580A Quad Core 1.3GHZ CPU which is used to power all of your large 3D games, and for a handheld under $100 this is one of the most powerful processors we’ve seen.

It uses a modified version of Android called Pandoras Box, a piece of software that’s popular in classic arcade TV boxes, and this is one of the first times it has been put into a handheld, so there are some issues when it comes to configuration and finding files.

Deep within the Powkiddy A19 you also have the ability to connect to WiFi, and they state you can pair up bluetooth controllers but for us, it’s impossible and isn’t working., Even some of the cheaper retropie handhelds that we have reviewed can do this.

Straight out of the box the Powkiddy A19 comes with hundreds of installed games, from Capcom VS Marvel 2 on the Dreamcast to Mortal Kombat 4 on the Playstation. Most of the games are well known, some not so much, but unfortunately after testing we can’t seem to install any ROM’s at all.

Not even one. Many think that this is as easy as inserting your ROM filled SD card, but as of this review it is impossible to install your ROM’s. We are hoping this gets fixed in an update as soon as possible.

The library section of the Powkiddy A19 is very easy to use, everything is an alphabetical order, and you simply press left to change through pages, or use to search bar to type in your games.

Once you’re in you will notice the Powkiddy runs most games perfectly well at 60hz, and the 512MB RAM helps. The smaller games and emulators such as the Gameboy, Famicom and even Playstation 1 run perfectly.

No frame drops, no screen tearings it’s all silky smooth and the gameplay feels great. All of the buttons are incredibly responsive, the d-pad works well, and the analogue stick is incredibly durable with no spinning issues that you would find on some of the lower end handhelds like the Powkiddy Q90.

It’s when you start pushing the Powkiddy A19 towards the 3D Dreamcast and PSP games that you get signs of struggle, but very, very little. We noticed a handful of frame skips on large Dreamcast games, but not as often as we anticipated.

It still runs at high frame rates, and is absolutely playable, but for those of you that pay attention to detail, you will notice in some games, slowed down movement, audio cracking and a few frame drops. But, this doesn’t happen much, you can play most Dreamcast games on this thing and go 30 minutes without a hick-up, and even that is a good sign from a $90 handheld.

The same goes for PSP, majority of the games work great, some of the bigger ones may skip frames, and crash from time to time. In reality, we don’t mind that, that happens to our real PSP handheld from time to time, but we have to mention that it doesn’t run them perfectly.

All other emulators and games will run without problems. But just remember, some games that require shoulder buttons may be impossible to play unless you configure your front buttons, but then again, that’s an awkward way to play, even if you do have 12 fingers.

The Powkiddy A19 also has 5000mah of battery power, and from what we’ve tested, it can run 4 hours on one charge, but this handheld isn’t for long term play, nothing beats a console. But playing on it for an hour or so is perfectly comfortable, and the battery will certainly keep you from worrying about losing your save.

However, we need to mention other creators in the community who tested the engineering units had issues with the screen going so warm that it would produce a heat bubble within the screen, causing a major defect. Some creators failed to mention this, but that’s the problem when you rush a review, you get imperfect samples.

After days and days of use this problem has not happened to our unit, which makes us believe that they have fixed it.

The longest we have played on the handheld is over an hour, for those doing more than that you may come across this, but we’ll let you know the more we use it, if we do find a problem, you can be assured the review will change, but if it did, you would have already read it by now.

Overall Opinion Of The Powkiddy A19

The Powkiddy A19 is nowhere near perfect. Powkiddy have a history of bringing out quite low-end handhelds but it seems like they’ve really invested in this one.

The design for us, is beyond beautiful. The bright yellow shell with black minimalist buttons and a great stick that has this curved accent detailing around it makes us rank this one of the best looking handhelds of the year. We can’t get enough of it, but the lack of shoulder buttons is what has made us rate this a 6/10.

It was a stupid mistake for Powkiddy, so stupid in fact that it’s probably going to lose them thousands of thousands of dollars to competitors. If they add in shoulder buttons this rating would have been much, much higher. But, that aside it plays games great, packs a nice amount of power, has a stunning 3.5” screen and looks absolutely stunning. So close, yet so far Powkiddy.

Is it worth $90-$100? Unfortunately not. The reason you would buy this is to play N64, Dreamcast and PSP games, but the lack of shoulder buttons makes that near impossible to do so comfortably.

It’s actually a real shame, and Powkiddy should be embarrassed that they let this go on shelves without those mandatory shoulder buttons.