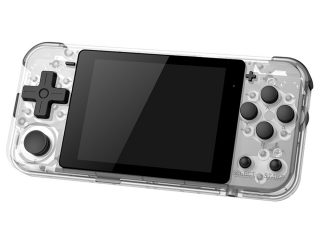 An overpriced must have

The Powkiddy Q90 is one of the first retro handhelds to be released in 2020, and although it has very little power and is slightly overpriced it has become one of favourite looking handhelds to come out of China.

But is it worth the high $50 price point? Let’s discuss.

How Does The Powkiddy Q90 Feel?

The PowKiddy Q90 has a very curved, minimalist aesthetic to it that we absolutely adore. The shell is high quality plastic, and bends around the edges of the handheld, creating a smooth, comfortable form factor. It’s small, very small in fact, perfect for putting in your back pocket, or leaving it in your coat. The problem with a handheld being this small is that it starts to get uncomfortable after about an hour of use, so take that into consideration. You may want a bigger handheld like the Retro Game 350.

The Powkiddy Q90 has obviously gone for the Nintendo Switch Lite look, the same identical colour shell, with white pastel buttons as well as the -/+ buttons located either side of the screen. Some people hate this, but we absolutely love what Powkiddy has done. The buttons are responsive, well placed and all work as they should. The ABXY detailing and start/select has been left as an engraving, and no ink has been added to shell, making it look from a far as if nothing is there. Again, this adds to the minimalism of the Powkiddy Q90.

The only downside to the face of this device is the analogue stick. Unfortunately it’s a low quality one, it’s perfectly located and is very thin so it sits flush with the device, but its made from low quality plastic, meaning getting decent grip on this thing in fast paced games is a little tricky. Powkiddy should’ve added a rubberised cap.

The screen is a 3” IPS display with a resolution of 320×240, nothing crazy. It’s small, bright and has high saturation, so playing Gameboy Advance games is an absolute joy. Viewing angles aren’t the best either, but on a 3” display, nobody really cares. The screen is unfortunately plastic, and you’d think for a $50 handheld, it would at least be glass.

Ports wise, it only has a few, you have the USB-C (hurrah) port on the top, the SD card slot and the headphone jack at the bottom. We like having the 3.5mm headphone jacks at the bottom of these devices because it prevents any weird tie ups, but some out there still have them on top, so the cable has to go behind the device and then under your hands which just isn’t nice for anyone. Finally, the on/off switch is located on the side, like the shoulder buttons it sits slightly out of the shell for easy access.

It sounds as if we dislike the look and feel of the handheld, but if anything, we absolutely love how this thing visually pops. It feels great in the hand, and the pastel Nintendo visuals alongside the great build quality really does make it feel like a handheld that’s been released in 2020. Many handhelds that come out of China feel cheap, but the Powkiddy Q90 exceeds this, and that’s why we think they’ve put such a high price tag on it. It has that perfect look that’s aimed towards Nintendo lovers. This fits the younger audience, and us oldies that like fresh looking handhelds.

The Powkiddy Q90 can emulate the following games:

The Powkiddy Q90 has a AllWinner F1C100S CPU, the same as the original Bittboy Pocket Go, which if you remember rightly, wasn’t very powerful. The NXHope emulator software is easy to navigate, with emulators, and preloaded games easily accessible from the home page. You can even change your layout and theme to a Zelda theme, which we have done below.

Once you open up a game, you can get to the emulator settings by press – and + at the same time. This will allow you to save states, load states, change settings and even add cheats should you want to.

The Powkiddy Q90 emulates everything well apart from Playstation 1. Gameboy, Neo Geo even 3D Mega Drive games are fluid, and play superbly on the bright 3” screen. In fact Gameboy ran and look so good on this thing, that it’s now our go to travel handheld for playing our Gameboy games on the go. Pokemon Fire Red with an analogue stick never felt so good. Like any emulator, you can change then dimensions of the screen, should you want it stretched or not.

Playstation emulation hands down doesn’t work. It struggles with most games. First you’ll start to hear the audio lagging behind, it will sound like it has been slowed down, and then the games will drop to around 15-20 FPS, making it unplayable. Why Powkiddy has advertised that this device can play these games we do not know, if anything it’s 100% false advertising. So if you’re after a cheap handheld to play PS1 ROMs, don’t buy this one, we recommend something with a bit more power like the Game Kiddy 350H.

Overall Opinion Of The Powkiddy Q90

The Powkiddy Q90 has so many things going against it, the $50 price tag, the poor processing power and an analogue stick that looks like something off of my grandmothers cardigan. But, the small form factor, Nintendo aesthetic, and the ability to emulate Gameboy ROMs well, it really makes us fall in love with this diddy handheld.

On paper, it’s not even worth looking at, but the design alone has made us fall in love with it. But most of all the reason why we love it is the fact that it came pre-installed with thousands of old school games ready to play straight out of the box. This is something many of the best retro handhelds don’t even do, but this is what makes the Powkiddy Q90 a perfect pick up for yourself or a friend on their birthday.

The Powkiddy A90 is a great looking handheld that can become your new pocket Gameboy, but the $50 price tag is just a little too close to better handhelds on the market. If it was $35, this would sell like lighting.