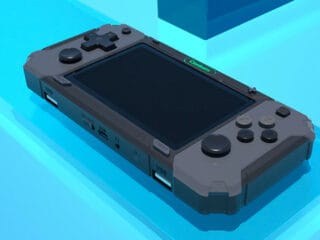 Visually pleasing, but nothing new

The Coolbaby RS3128 is a new handheld on the block that features Android as an operating system, showing that it’s trying to take on the infamous Retroid Pocket 2.

But does it have what it takes? Is it powerful enough? What can it do? And why does it look like the Terminator’s smartphone?

The Coolbaby RS3128 retails for $88, which is high seeing as it only has four shoulder buttons, and can only really emulate up to N64. The competition can do far better, for the same price.

Yes, it’s Android, but it’s a dedicated user interface, that admittedly can be changed, but it’s been built to house your retro games in one area. It’s not neat, but it’s easy to understand. It also features a “android apps” folder for you to access android only applications.

This is one of the crazier looking handhelds we’ve seen come out of China, making some of the best retro handhelds look like cereal box toys.

This is why we pulled the trigger. It features this rugged, sharp, modern look to it that looks as if it’s been built with metal, but in fact it’s plastic.

It’s certainly an aesthetic that many will hate, but we know there’s a lot of you out there that will like the look of it.

CoolBaby aren’t the best handheld manufacturers around, but with the CoolBaby RS3128, they’ve used some imagination, which hasn’t really happened before with their previous handhelds.

As much as it looks like metal it is not, if only it had the build quality of the RG350M for this price. It’s made entirely of plastic. The huge 4″ screen in the middle will make this handheld fairly large, probably the same as an iPhone, maybe even bigger.

It’s also a good starter handheld for those that are visually impaired, the bigger screen does help, but the menu text is fairly small, which almost contradicts itself, oddly.

The two analogue sticks are perfectly placed, below the DPAD and ABXY buttons. The home button and ON/OFF buttons are located on the front, along with the – & + volume buttons which double up as the menu buttons for the built in emulators.

These have some nice feedback to them, and all of the buttons in fact! The rubber underneath the buttons seems high quality, giving it that nice bouncy feeling.

Also, as SW PL Gaming states, the “shake test” is good. This is where you shake the handheld in hopes of not hearing anything rattle. It passed, there’s very little rattling, and the only thing you can really hear is the battery pack now and then, but it’s in there pretty tightly.

You can also see the start/select buttons at the bottom of the handheld, below the IPS display. It’s a unique looking handheld that’s for sure, as if it’s designed to be a futuristic product.

The analogue sticks are very bad, they’re flat, slippery, and have no grip to them whatsoever. For a $88 handheld this is very dissapointing, it reminds us of the poor analogue sticks on the Retro GP430.

If you have sweaty hands, or like to eat snacks when you game, you’ll hate these two analogue sticks. The slightest bit of moisture on them makes them a real pain in the backside to play on.

We’re wondering if these spin or not when playing, as it’s something that frustrates us with the lower quality analogue sticks.

On the top of the handheld, you’ll find your SD card slot, a HDMI out port and your two shoulder buttons. Why they didn’t add four we do not know, but it’s most likely that CoolBaby wanted to cut costs and use an older motherboard to increase profits.

This is one of the biggest flaws. No handheld should be released in 2020 without shoulder buttons, if it does, expect it to sell no more than 500 units. Coolbaby just shot itself in the foot.

On the bottom, there’s a bit more. You’ll find two USB ports, which allow you to plug in wireless controllers. The CoolBaby RS3128 could act as a portable console if this works properly, but we would have liked to see bluetooth connectivity instead.

There’s also your Micro-USB port, a headphone jack, and a reset button.

It has a quad core processor, 1GB RAM and runs on Android, so you’d think that this would have a possibility at taking a shot at the big dogs like the RG351P or the RG350P, right?

Well, not really. Here is that the Coolbaby RS3128 is advertised to play:

From our experience with previous CoolBaby products, they have a history of lying about what it can emulate, and they’ve kept this lie going throughout 2020 and into the Coolbaby RS3128.

This is one of the biggest problems with Chinese retro handhelds. They deceive customers into buying their products, have very little customer support and rarely give any refunds. We talk about it in more detail in our ZPG Pro video review.

After playing around with the Coolbaby RS3128 we noticed that the handheld starts to struggle when we started testing some of the best N64 games, specifically the larger 3D games.

Golden eye is a no go, but Mario Kart 64 just about worked, even if we did experience a number of frame rate drops and audio cracks on every game.

But this for us is a fail, this does not pass the “it plays N64 games test”. Just because it can play a handful of the smallest 2D Nintendo 64 games does not mean they can advertise it as a N64 handheld. That’s nonsense and complete lies.

However, on the bright side, everything below that played very well. The best Gameboy Advance games played flawlessly, even the best NES games was a pleasure to play on. PS1 games works well, but PSP not so much, that’s pushing the boundaries slightly.

You might be thinking “that’s not bad for $80”, no, it is. Handhelds far cheaper than this that came out in 2019 can emulate as well as the Coolbaby RS3128. Coolbaby are simply using old technology and adding a new shell to try and impress gamers.

But we all know you can’t polish a turd, that’s not cool… baby.

In the listing it says “preloaded with thousands of games”, oh wow I thought, that’s nice of them. Yes, but when I turned on the handheld, I noticed it was all in Chinese. I had no idea what the hell i was about to play on when I went through the menus.

This is a handheld for someone who REALLY wants a 4″ screen, and REALLY likes the design. Apart from that, you can buy far better from a more reuputable company than this.

Performance was nothing special from a $88 handheld. We feel like this handheld should have been released two years ago, not towards the tail end of 2020.

Overall the Coolbaby RS3128 is one to miss. The new, unique design is there to reel you in, and then you’re stuck with an average handheld that can emulate most things your old Bittboy Pocket Go V2 can do.

CoolBaby have tried to do something different here, which we respect, but while doing so, they have missed out some of the fundamentals. For example, decent analogue sticks, four shoulder buttons and USB-C charging.

This isn’t 2019 anymore, the handheld competiton in China is forever growing, and it looks like CoolBaby is falling behind, majorly.

They need to pull something incredible out of the bag before 2021 if they want to become relevant in this day and age.

It’s a shame, because want to give them a chance, but they need to stop pumping out Kinder Egg toys.