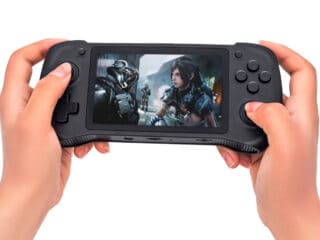 It’s easy to let a handheld slip past our radar, but the Retro GP430 is one that has caught our attention, specifically because of the way this retro handheld looks.

So many handhelds are being released lately, many of them making their way into our best retro handhelds list, but the Retro GP430 is one of the first handhelds to come out of China to feature a large 4.3″ IPS display.

But, for some odd reason, they’ve gone back a step, and used Raspberry Pi CM3. Our previous experience with CM3 is quite simply, ok. It will run most of your old school games, but it’s nothing revolutionary, and may struggle with bigger 3D games.

When we asked why they didn’t use the Pi 4, they responded with: “When we developed the machine, the industrial version of the Raspberry Pi 4 was not yet released”.

Which is a shame as this would be a totally different handheld if they used a Pi 4. We can see the innovation here, they’re taking a step in the right direction, but some corners have been cut in the process.

The Retro GP430 is a great looking handheld, it’s big, chunky and features a huge 4.3” IPS display that overpowers any other Chinese handheld we’ve reviewed this year.

It looks aggressive, the sharp curvature of the shell makes it look like it will fit any hand comfortably and that it does. This is by far, one of the more comfortable handhelds we’ve tested.

Our finger have so much space, the buttons are perfectly placed for our fingers to touch, the shoulder buttons require very little stretch and the raised back shell makes the handheld rest comfortably in your hands.

Thi is a well designed shell, and the team should be proud, even the grill at the back for air flow has been placed away from your fingers to help with temperature.

The face of the handheld

Like any handheld, it’s not perfect. We’re starting to think the perfect handheld will never exist, but the Retro GP430 has certainly skipped past the market research when it comes to what the community wants from a handheld.

Time and time again, you’ll see many Retro Dodo members complaining about he analogue sticks, and the DPAD placement, and the Retro GP430 has done it again with awful quality/location choice.

The analogue sticks are cheap, thin, and it feels like they’ll break if I was to pull them hard enough. It’s the same analogue sticks used in the cheaper handhelds such as the Powkiddy RGB10 and the RK2020.

Why they chose these we do not know, but our bet is that they are far cheaper than the better Nintendo Switch analogue sticks like the Retroid Pocket 2 uses.

They have also kept the DPAD below the analogue stick, the majority of the community hate this, so why they didn’t do some research and change this is again, beyond us.

As much as we hate the sticks, we do like the small detailing around them, it adds character to the handheld.

The ABXY buttons are actually very nice, just the right size to keep space between them, and bouncy enough to receive some very nice feedback.

Smack bang in the middle of the handheld you are greeted with the Retro GP430’s best feature, the 4.3” IPS display.

This is a stunning display, it’s bright, filled with color and has a high 800 x 480 resolution which looks incredibly crispy when playing your best PS1 games.

This is what gives the handheld a change in this over saturated market. The display makes it hard to go back to smaller handhelds. Some of you may think, “but surely games will be stretched”.

The display is protected by a plastic cover, which we would have like to see replaced with glass seeing as we’re spending close to $200 for this thing.

What’s on the top and bottom of the handheld?

On top of the Retro GP430 you will find your trigger buttons, two USB-C ports your Mini-HDMI out and an on/off button.

So yes, you can hook this up to your TV if you fancy playing Mario Kart 64 on your huge 4K TV.

Due to the design of the handheld your trigger buttons are nicely raised, making it easier to play, this also adds to the handheld’s character and allows the screen to sit close to the edges of the shell.

It’s also very nice to see them use USB-C, this is probably the most modern piece of tech in this handheld.

At the bottom you have a headphone jack, your TF card slot and a volume wheel. These are in between the speaker grills which sit within the grips.

The volume wheel doesn’t go to zero, meaning there’s always a tiny bit of sound, this is fairly annoying especially if your girlfriend is sat next to you watching Selling Sunsets on Netflix all while moaning at Crash Bandicoot spinning every 3 seconds.

This can be easily solved and the developers have mentioned this problem will be solved for all future customers as it only needs one setting to be tweaked in order to fix it.

This is the perfect location for speakers, the sound will never get distorted as they are far away from your palms.

Let’s talk about the back

We received our unit and thought, wow, this looks cool. Then, when we turned it over, for some reason there’s a huge black information sticker just slapped randomly on the back.

Why? It’s not even straight!

It’s small things like this that the creator looks past, but for me, someone who has reviewed handhelds for years it just makes the handheld look cheap.

UPDATE: After speaking with the company who created this handheld they have informed us that for normal customers (not reviewers) this sticker will be removed.

How does the Retro GP430 perform?

The Retro GP430 has a Quad core CPU,1.2GHz with 1GB RAM, which for this day in age is somewhat normal for handhelds. But for a $170 handheld, you may say that’s too little, and we agree.

The CM3 is a great bit of kit, but it’s many years old. The designers behind the Retro GP430 would have had a lot more luck if they placed a Pi 4 in here for the same price.

Look at the PiBoy DMG for example, that thing is the same price, but features the much newer, and much more powerful chip. We think they should have waited a few months and used a Pi 4 in all honesty.

Because the Retro GP430 is slightly bigger than your average Chinese handheld, it has the ability to feature a large 5000MAH battery inside. This got us around 4.5 hours of battery life before needing a charge.

We tested Dreamcast, and PSP but no luck, this was very poor performance. Audio was cracking/freezing, frame rates dropped to below 20 and the whole gaming experience was just horrible.

Gameboy games, NES, SNES and MAME were also great to play on this thing, and because the handheld was so comfortable we found ourselves playing for hours without needing a rest.

It’s just a shame the bigger consoles couldn’t be played. The high price tag is why we’re being so strict with this review. If it was $99 this review would be entirely different and our rating a lot higher.

But for $169.99, there’s far better competition out there for half the price, so it makes this hard for us to recommend.

It uses RetroPie though which is highly customisable, you can make the User interface however you like, and the fact they pre-install over 15,000 games is very nice. It saves us having to go use our own ROMs, and we can imagine that’s what will intrigue new retro gamers.

The Retro GP430 at the core is a decent handheld. It’s large screen and insanely comfortable design makes this handheld a pleasure to play on for hours on end.

Its aggressive design makes it look attractive to many handheld enthusiasts out there, and it should. The design is probably the best feature, alongside the display.

They’ve positioned things perfectly like the shoulder buttons and speaker grills, but then bit themselves in the butt with the low quality analogue sticks.

We also noticed the handheld get warm after an hour of use, but this shouldn’t worry you, it has a built in fan to keep it cool and we’ve never had any problems with overheating.

But why we ranked the Retro GP430 like we have is quite simply due to the over exaggerated price tag. For $169 you can buy much better handhelds, with far superior processing power.

What this handheld needed is the Pi 4 chip, with the Nintendo Switch analogue sticks and a glass display cover. Then, this would have beat it’s competitors and we would have highly recommended it.

But no, we feel as if this was rushed into production and most of the market research was skipped. If only they took a risk with the Pi4.

It’s a shame, because this is genuinely a well designed handheld, they just cut corners in order to get it onto the market.

We also noticed that their team is open for advice, we have been speaking with them for hours about how they can improve, what they should do, and what they want to accomplish in this space. They seem motivated and eager to learn which is refreshing to see in this fast paced market.