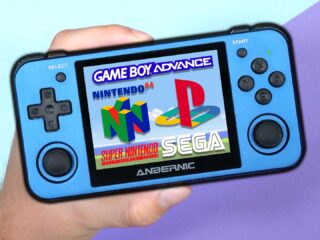 The ultimate RK3326 handheld, but it has arrived late to the party

The RG351MP is yet another one of ANBERNIC’s RK3326 chipset handhelds, one that many are stating is too late to the party and while we agree, this is a handheld we can’t help but like.

Currently, the retro handheld scene is about to explode with new models, new operating systems and new designs, this is because during the pandemic many of the factories who created the chips had to shut.

So now that we’ve had a delay, and factories are back up and working, we’re now seeing an influx of handhelds being revealed in a shorter period. For example we recently had the AYN Odin Handheld be announced, the Powkiddy X18S launching on September 28th and the long overdue Analogue Pocket just around the corner.

The retro handheld market is currently very over saturated and potential customers of the RG351MP know that something more powerful, for a similar price is just around the corner and this is what is causing us to struggle with this review.

The more you read, the more you will realise the I love the handheld, but knowing what’s on the horizon can’t help me think that this could be a handheld to skip if you’re tight on spare cash.

As of August 2022, this is still one my favourite handhelds to take with me on the go. That’s saying a lot seeing as the market is oversaturated and the handheld is now years old, but it’s still so good!

If you’re new to ANBERNIC products, then I can confidently state that they make some of the highest quality affordable retro handhelds on the market. Back in 2019, that’s how ANBERNIC beat its competitors, by simply focusing on build quality.

The RG351MP is now their highest quality handheld on the market, similar to that of their older metal handhelds like the RG350M and the RG351M.

We’ll get on to what’s new about this variant shortly, but in terms of build quality the RG351MP has been made out of aluminium, and comes in three different colours: Matte Black, Ocean Blue and Mint Green.

In the centre of the handheld you will find the new 3.5″ display which has a resolution of 640 x 480 and has an aspect ratio of 4:3, something which many retro gamers think is a necessity in retro handhelds, and we couldn’t agree more.

This screen may be familiar to you, and that’s because it has came directly from the RG351V, another one of ANBERNIC’s popular handhelds.

The screen is perfect for this type of handheld, it’s crisp, clear, pops with saturated colours and although it’s not HD, it’s all you need for playing retro games. It’s one of the features that puts it ahead of the RG351M and the RG351P, hoping to lure you in.

Around the display, you are greeted with ANBERNIC’s typical horizontal layout. The thick, strong D-PAD is placed on the left, and allows you to play fighting games with ease.

Below that along that bottom of the face you will find two analogue sticks which are identical to that of the Nintendo Switch and feature R3/L3 functionality. These sticks have been around for years and have somewhat become the “norm” in retro handhelds due to them being so easy to source.

The action buttons are, pretty basic, have a nice bounce to them but lack any new design or feature. We wish that the RG351MP featured some kind of RGB lighting just like the Gameforce handheld.

On top you will find four shoulder buttons. They’re not flared like the upcoming Retroid Pocket 3 which is disappointing but they are nice, and comfortable to use. They let the RG351MP keep it’s sleek portable look, and wrap slightly around the corners for even more versatility.

It also features two USB-C ports for charging, plus the addition of accessories, it has a headphone jack, two SD card slots, volume buttons (which you can’t hold you have to press 10 times to mute), reset, on/off and even the speaker grills are located on the bottom so that they don’t clash with your hands when playing.

On the back, your standard text and the iconic RG rubber grips which is a great feature for those that like to play for hours on end.

All of this combined makes the RG351MP feel like a well polished handheld, and if we didn’t know who made it, and you told us it’s Sony’s concept handheld, we’d believe you. That’s how well build this thing is.

The metal adds a new level of premium compared to its plastic variants and it’s by far our favourite RK3326 handheld to date, the buttons, and design is perfectly planned out, and with the selection of colours it really attracts eyes when playing on the train.

It’s close to being flawless in terms of build quality, and that’s saying something.

We’ve lost count on how many RK3326 handhelds we have reviewed. The chip has been overused through the industry and when we heard that ANBERNIC is launching this, with yet again an old chip, we were slightly disappointed, and still are.

This chip is outdated. Majority of potential customers in this niche own at least one handheld with this chip, so why ANBERNIC feel the need to launch even more in the niche, really confuses us.

But when you look deeper, it’s quite obvious why, and that’s because these chips are so easy to source and increase their profit margins drastically, especially if for some odd reason they are sitting on loads of them due to the chip shortage we’ve had this year.

The term “you can’t polish a turd” comes to mind, and ANBERNIC has tried everything in their power in order to pull it off.

So for those of you who haven’t read many of our other product reviews, the RK3326 chip can basically emulate all retro consoles up to PS1 with a sprinkle of Nintendo 64.

This can play your old Gameboy games, SNES, NES, your best SEGA Mega Drive games, Playstation 1 and so on.

For those wanting PSP and N64 games you will be dissapointed, now don’t get me wrong it will play some of those games, but not well. You will notice frame rate drops, crashes, cracking of audio and so on.

But if you stick to consoles up to PS1, you will be delighted with the performance and teaming that performance with a metal shell and a stunning 4:3 display, it really does make you appreciate the handheld as a whole.

It rounds everything off nicely. This is all the RK3326 chip is capable of, and they’ve been around in handhelds for two years now, so performance hasn’t budged, just design and build quality.

Like any open-source handheld, they’re easy to configure. Out of the box the RG351MP runs Emulation Station, which is an easy to use OS, and can be configured to your needs. If you want to change the OS, you can also do that by looking at some tutorials online.

This allows you to change the way the handheld looks and feels when skipping through your games. Some operating systems and firmware can increase the performance slightly, but the chip still caps gameplay to N64 and PSP unfortunately.

The community behind these handhelds are forever growing, and it feels like a big group of nerds who want to help those make the most out of their handhelds, so you won’t feel alone should you need help with this device.

Overall the RG351MP is a stunning device. The build quality is the top of its game, and competitors in this niche really struggle to compete. But the problem with the RG351MP isn’t about the device itself, it’s about where it sits in the current market, and its late release doesn’t help it sell.

Only a very small number of gamers in this niche want a new RK3326 handheld, because they already have one. Even with the new display it’s still a hard sell when we all know what’s just around the corner in a couple of months.

If the RG351MP launched 6+ months ago, we’d be highly recommending it, but ANBERNIC have left it too long and the over saturated market just doesn’t want another RG handheld with little reasons to upgrade.

The handheld feels great, performs everything up to Playstation 1 flawlessly, and is by far our favourite RK3326 handheld on the market, but it’s late to the party, and for that reason we only recommend this to those who don’t have this chipset and perhaps really want a metal handheld with a 4:3 display.

We’re on the fence with this one.