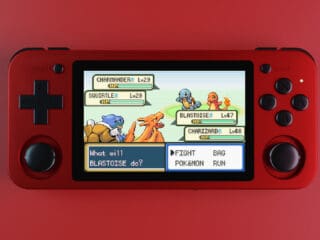 The RG351M has been a highly anticipated handheld amongst the retro gaming community, and that’s for good reason.

Ever since ANBERNIC’s release of the RG350M in early 2020, no other affordable handheld out of China has even come close to the top notch build quality of their metal series.

It’s crafted with precision, and the added weight gives the handheld a premium feel, even if it only costs around $100.

What the RG351M does better compared to other handhelds on the market is reliability and superb build quality. ANERBNIC are one of the only retro handheld companies in China doing it right, and they’re investing into owning as much as the market as possible, with huge success.

For those new to retro handhelds please don’t think that these are “shady” or “illegal” because they are not. These handhelds are for those that want to play their favourite retro games on the go with the ability to add your own ROM’s.

Downloading ROM’s is illegal, but ripping ROM’s from your personally owned collection is not, and that’s how you are meant to use these handhelds.

So, let’s jump into why the RG351M is our all time favourite affordable retro handheld.

Is the RG351M worth the extra $40, absolutely. The RG351M is crafted from a solid block of aluminium which comes in a gray or black variant. This simple change of materials makes the handheld feel better in the hand and because of the metal used it can sustain a lot more bumps and scratches.

This handheld will last you for years to come, and it will be the handheld you keep going back to in the future, because it will be the one that keeps on working, even after years and years of abuse.

On the front of the RG351M you will see the small bezelled 3.5” IPS display which has a resolution of 480 x 320. This is by far one of the best selling points of the RG351M, the screen is crisp, bright and has strong saturated colours.

This is mandatory for a retro handheld of this size and many will use it to play the best Gameboy Advance games. Its 2x scaling has a very natural feel and when playing the likes of Pokemon Fire Red, it actually looks better than it would on a modded IPS GBA SP.

The screen also has a high quality glass screen over the top, something cheaper retro handhelds don’t have. On the left of the screen yu have your analogue stick which is identical to that of the Nintendo Switch and your DPAD which is large and chunky enough to play fighting games organically.

The great things about these analogue sticks is that they dip into the handheld slightly, making it flush with the buttons and making it far more portable. This stops snagging when taking it in and out of your pocket.

On the right another analogue stick and your ABXY buttons which are identical to that of the RG351P. In fact, everything is identical to the RG351P apart from the metal shell and built in wifi module which allows you to remotely organise your files from a PC instead of putting your SD card into it manually.

The RG351P never had this because ANBERNIC originally had issues with this WiFi Module, so they took their time to fix it and use it as an “upgrade” for the RG351M model. It’s not a huge selling point in our honest opinion, but it is a nice feature that helps us add value to the extra $40 price tag.

Around the sides of the device you will find speaker grills, reset buttons, SD card slots, a volume wheel and a couple of USB-C ports for charging and adding controllers.

One major downside to the RG351M is that there is no HDMI out, which was previously on the old RG350M. We’re not sure why this is but we think its because originally the HDMI out had many problems, sometimes it would work, and sometimes it wouldn’t so they have removed it completely so there will be no complaints.

For a $140 handheld this is a little disappointing, as it would have really made this handheld flawless. Perhaps the RG351V will add this?

On the back you will find the signature grips. These are nice feature, they may not add much grip to your hands but its works wonders when its placed down on a desk, it never slips off unknowingly.

The handheld just screams premium, and the metal cuts are so precise, everywhere you look just adds to the beauty. Even around the tiny on/off buttons you’ll find small detailing. The only thing we dislike about the design is the white START/SELECT text next to the buttons, it just looks out of place.

This is by far one of the best retro handhelds in terms of build quality. There’s no rattling, no loose buttons, no off placed screen, it’s perfect.

Because of the large 1.5GHZ CPU the RG351M can emulate a wide number of games, but you have to remember it only has four action buttons, and only one screen, so although it may be able to emulate a desired console, it may not be comfortable to play on at times.

For example, DS games, yes it can emulate some of them, but playing DS games on one screen is near pointless. N64 can be emulated, but the lack of buttons make it a little awkward.

This handheld in our opinion is for those of you that want the ultimate handheld for everything up to Nintendo 64 games. We have marked an X next to the ones that will need constant tinkering of settings or the ones that don’t play 3D games 100% effectively.

As mentioned at the start of this review, we said that the RG351M is very reliable, and we stick to that. ANBERNIC are renowned for creating products which last and although these specs might not sound incredible, we can assure you it will play most of your retro games flawlessly.

The RK3326 chip is getting old now, we’ll be honest, but that doesn’t make it bad. Yes, everyone wants flawless Dreamcast emulation and Gamecube games on a handheld, but we’re just not their yet, especially in a sub $150 handheld.

The future will bring us that, and most likely even in 2021, but by far, at this moment in time the RG351M is the best affordable retro handheld that performs well.

It can emulate some N64 games, but big games like Goldeneye and beyond will struggle, by that we mean frame rate drops, slight stuttering and frequent audio lag. But below that, such as 2D N64 games, PS1, Gameboy Advance and so on, plays flawlessly.

If you stick within that region you will have an incredible retro gaming experience. The CPU matched with the stunning build quality and bright display makes anything else we play on in this price range feel average.

You can save states, load games, change resolutions, add your own box art, change the OS, add cheats, you name it. The OS is clean, simple to use and does everything it should which is perfect for newcomers.

But what makes these open source handhelds so great is the fact that experienced gamers can modify the OS to their liking and use cool new features should they know what they’re doing.

For example, there’s a feature called NetPlay, that allows you to use the WiFi module in order to play with friends using the exact same OS with the exact same core on the exact same game. Admittedly this is a pain in the butt to do, and will require some previous OS knowledge in order to get it working but it’s there if you have the time and patience to play around with it.

This really does feel like something a high end company would make, and it’s honestly going to be competing with the upcoming Analogue Pocket even though they are two very different handhelds.

I’m impressed with the performance of the RG351M it has this very natural, tactile feel to emulation and it excited us everytime ANBERNIC does this because its modern technology meeting retro games in a way that feels so great.

Out of the box too, this works wonders, so its something we can recommend to both retro handheld newcomers and collectors who love to tinker.

The RG351M has blown us away. We knew what to expect when we reviewed the RG351P but after not playing around with a metal handheld for a few months, it really does make you realise how better the metal shell feels compared to plastic.

The weight gives it value, and adds to the button feedback when playing games. The layout of the RG351M is perfect for both small and large hands, we found our fingers naturally rest on all four shoulder buttons without stress like the PocketGo S30.

The chipset is reliable and powerful with silky smooth frame rates on most emulators. If you want to dive deeper into the handheld, tinkering is welcomed and its why many retro handheld lovers adore these things. It’s because you can craft it into what you want with the ever increasing choices of operating systems.

This is one of our favourite retro handhelds to date, and it excites us because we really think ANBERNIC are going to bring so many new people into the retro handheld scene, even if they have some work to do in terms of customer service.

This could be the best handheld of 2021.

UPDATE: For those of you asking, yes this comes preloaded if you buy the RG351M from RetroMimi.