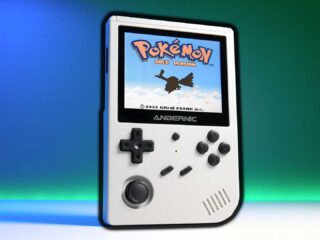 A near perfect vertical handhelds

The RG351V is ANBERNIC’s latest handheld that comes in a vertical form factor and houses a stunning 4:3 display.

Over the last few years ANBERNIC has evolved into a respectable, and highly competitive company within the Chinese retro handheld market.

They have continuously released products that are far beyond what is expected from a typical “AliExpress merchant” and they’re continuously tweaking the OS to make it friendly for all ages and experience groups straight out of the box.

The RG351V is their latest handheld ANBERNIC previously released the RG351M, a handheld that raised the bar in terms of “bang for your buck”, but many retro gamers wanted the possibility to play on a handheld from ANBERNIC, with a vertical form factor.

And so, they made that a possibility.

Over the last year or so, we’ve seen the prices of these RK3326 handhelds sneak up above the $100 mark but we can assure you, the quality has also improved, and the ever increasing popularity of these handhelds is also a factor to consider.

As soon as we took the RG351V out of the box we were surprised with how big and heavy this handheld is. It’s big, and is certainly no longer deemed as “pocket friendly” anymore.

The screen takes up 50% of the handheld, and that’s for good reason, this new display is absolutely stunning, and with the few extra pixels per inch you can really tell a difference, it’s as if it feels bigger than 3.5 inches.

The display is very bright, has incredible viewing angles and the colours just seem to pop out of the screen when playing games, it’s one of our favourite parts of this handheld.

The 4:3 dimensions of the display is also perfect for all of your retro games, they fit flawlessly within the display at its native aspect ratio. ANBERNIC nailed it.

The shell itself feels like a sturdy, reliable material and you can choose from a transparent black, a wood grain design and a grey which we have here. We’re waiting for someone to create custom buttons and stickers for the bezel in order to turn it into a DMG look.

On the subject of buttons, everything is well placed, the large size of the handheld makes it feel very comfortable in our hands, we admit the analogue stick looks out of place, but it’s where it should be naturally. The DPAD, and the action buttons are responsive, bouncy and high quality.

There’s also a tiny LED indicator which lets you know if your handheld is in sleep mode, or when the battery is low.

The on/off button and reset button is on the side of the display, and are awkwardly small, as if we have to concentrate our fat fingers to press them correctly. The reset button requires a pen or a pin to press because its that small and sits inside of the shell which is annoying.

The volume buttons are okay, again, slightly small. Moving on to the back, the shoulder buttons sit above the battery pack on the back of the display.

At first we thought these were going to be awkwardly spaced but after playing for hours they’re easy to press, comfortable to rest the fingers on and are different enough to understand which ones you are pressing.

Making them slightly bigger would have been nice, but in all honesty there’s nothing wrong with them, they’re a great feature and ANBERNIC integrated them well.

Then finally, you have your SD card slots on the side, two USB-C ports at the bottom and a headphone jack, which is perfectly placed at the bottom of the handheld, not the top.

The RG351V feels sturdy, when shaking there’s no rattling or noises that shouldn;t be there and that goes to show how well ANBERNIC makes these things.

The build quality of their handhelds is far superior to any of its current competitors and that adds the much needed reliability and long lasting perks you seek when buying handhelds from China.

Although the RG351V feels perfect and is incredibly well made, in our opinions its not the best looking handheld on the block.

The buttons look scattered across the face, and the large bezels make the handheld look a little outdated, but that’s all a personal preference, there’s not many ways around button placement on a vertical form factor like this.

How Does The RG351V Perform?

When loading up you will be greeted with a slight vibration which comes from the built in rumble pack which can be setup for games. Then once you’re in you will find the Emulation Station menu which is easy to navigate and shows all of your emulators and games that you have loaded.

Yes, ours came preloaded, but remember this isn’t guaranteed.

The easy user interface is what makes this an easy to use device out of the box, no setting up needed, no button mapping, just unbox and play. That’s one thing ANBERNIC does well, and it allows us to recommend this device to newcomers and long term emulator enthusiasts.

We’ve reviewed many RK3326 handhelds in the past, it’s becoming an old chip, but what we do know is that emulation up to Playstation 1 is flawless, with no frame rate drops, no audio hiccups, nothing.

And that’s exactly what the RG351V emulates well. Gameboy, Mega Drive, Wonderswan, NES, SNES, Game Gear, and so on.

For those wanting to play on more power hungry consoles like Dreamcast, Nintendo DS, N64, PSP and so on, you maybe a little bit disappointed. Dreamcast doesn’t run too well, with frame rates dropping drastically, the same goes for Nintendo DS.

With the bigger 3900mah battery comes 4 – 5 hours of battery life, and the large speaker inside allows you to really pump out some serious sound. This is one of the best speakers we’ve seen in an ANBERNIC handheld, it’s very loud.

The RG351V also has built in WiFi allowing you to transfer roms wirelessly, update box art and even wirelessly play with other RG351V users, but we haven’t tested this as of yet.

Overall it’s a superb handheld, probably the best affordable vertical retro handheld on the market as of now. ANBERNIC have done it again with a well built product, even if it does look a little ugly and lacks any HDMI out, but we can handle that.

What we do advise considering for those interested in this device is to be aware of the sheer size of the handheld, it’s a big boy, and comes with a fair bit of wait, sneaking in at over 200g, which makes us believe this will never get a metal shell.

This is the go to vertical handheld for anyone wanting a retro games consoles that can emulate up to PS1 flawlessly with a sprinkling of N64 and PSP games to go on top.

We’re hoping to see some kind of new chip that ANBERNIC and others use in upcoming handhelds because we’re getting bored of seeing the same chip being reshelled and classed as a “new” handheld.

Should you buy this over a RG351P, yes if you want a better screen and longer battery life but no if you want comfortability and portability.