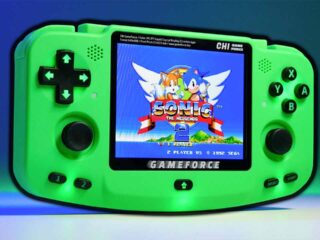 Almost great, but late to the party

The Gameforce is another retro handheld that seemingly came out of nowhere. It was over 6 months ago when Gao Feng the man behind this handheld revealed it to the world, back when RK3326 chips were somewhat in the middle of their lifeline, but after many chip shortages the launch has been pushed back and is now somewhat late to the party.

What we should mention in this review is that the Gameforce handheld is made by one man, not a company like ANBERNIC or Powkiddy, just one guy with a true passion for handhelds.

When our review unit arrived we were shocked to see that there was no official packaging nor was there any SD card ready for us to test. After heading to their website it was then clear that they do not ship their products with any SD cards, no roms, nor any emulators.

You have to do all of this yourself, which isn’t a problem for us as we’ve done this a million times, but for newcomers to the scene, this could make it an awkward experience and even put them off the handheld for good.

That’s nothing new compared to the best retro handhelds we’ve seen come out of China over the last 12 – 18 months. However, the design and overall appearance is like nothing we’ve seen before and the higher resolution screen is a very nice addition.

It’s gone for a beastly Gameboy Advance look which we really like, and it comes in 3 different colours, Milky, Orange and the green which all have the ability to change the colour of the LEDs behind the buttons.

Due to the curved design and GBA aesthetics it’s very comfortable to hold and the shoulder buttons even if they are terrible, are perfectly placed making it a great sized handheld for adults.

We like how they’ve kept all of the menu buttons towards the chin of the handheld and the plastic used has this matte finish to it which hides fingerprints completely.

But that’s about it…

After playing with it for a few days we soon realised that it feels a little claustrophobic and we hate to say it tatty.

The centralised screen has useless text around the borders, and it doesn’t sit flush with the display allowing you to see the green shell inside of the screen. The action buttons are loose, sit far from the contact and are just generally small making it easy to catch your thumbs when switching between A and B for example.

The DPAD is the opposite, it’s very stiff with no real feedback, it sits directly on the contact confusing us if we’ve pressed it or not.

Moving down the handheld you are greeted with two analogue sticks which are very low quality, to a point where you can actually see the rubber coming off the sticks underneath. They’re also very small, and use cheap material which makes them some what slippery.

And this is the reason we call the handheld claustrophobic, because the sticks have very little travel, making it feel like we’re constantly bumping the sticks to the side walls, and teaming that with the tight, small action buttons and the incredibly fragile shoulder buttons it makes everything feel out of sync.

We have to push the DPAD hard, the action buttons deep, and a light fart would set off all of the shoulder buttons because they sit so close to the contact that we don’t know whether or not we’ve pressed them.

Oh and don’t get us started on the back… Why it has these flared legs we do not know, it makes the Gameforce almost impossible to put into your pocket comfortably.

The only feature that alongside the design that makes this handheld enjoyable to play on is the higher resolution display. It’s crisp, sharp, has strong colours and makes a big difference when playing retro games, it’s going to be hard going back to a smaller resolution after reviewing the Gameforce.

For those that like transfering ROMs wirelessly it does have 2.4GHZ Wifi built in, allowing to to update the OS and transfer ROMS at your hearts content.

Moving on to emulation, it’s again pretty average. It’s the same classic RK3326 chip that we’ve reviewed hundreds of times, so your old games like the best Gameboy Advance games, NES, SNES, Mega Drive, and PS1 all work well on here, but once you moved towards larger N64 games and PSP this is when it will struggle and become near unplayable.

Emuelec is always a pleasant experience and it’s very user friendly with simple ways to add your ROMs. It’s just a shame Gameforce doesn’t add this for its customers because a lot of customers out there like their handhelds setup ready to go.

It feels like we’re being a little negative, and that’s because we are, if you’re joining the party late, you have to come with something new, and a higher resolution screen just isn’t enough for previous RK3326 customers to splash out on another handheld.

Don’t get us wrong, we love the way this thing looks, heck we’d go as far as saying we prefer it to the RG351P appearance wise. The speakers are loud, the battery life reasonable, it features a very sharp display but that’s all there is really.

We really think if they would have made the buttons all feel the same, added Switch sticks, removed the awkward back bumps, replaced the shoulder buttons with higher quality flared designs and sat the screen closer to the display this could have been really good.

It’s just a shame they cut corners where they shouldn’t and released the handheld 6 months too late. Yes this is going in our collection and looks bad ass but it’s hard to recommend this over older handhelds which are far more superior, it’s just the screen which keeps this handheld afloat, oh and the cool LED’s.

We feel a little harsh in this review and Gao Feng should be incredibly proud of what he has made, this is an impressive handheld made by one man. There’s a lot of good features, and there’s a lot of average features, but one thing we have to do here at Retro Dodo is keep the average consumer in mind when advising them on products to pick up.

Should you buy this? Yes, if you don’t have a RK3326 handheld, want a high resolution screen and love the beastly LED aesthetic, but no if you already have a handheld with the same chip.

We all need to keep an eye on Gao Feng because if he released it when he was meant to before the shortages of chips, this would have been a product that directly competed with ANBERNIC, that in itself is very impressive from one guy.

We look forward to what he does next, and we will support him the whole way. We love an underdog.