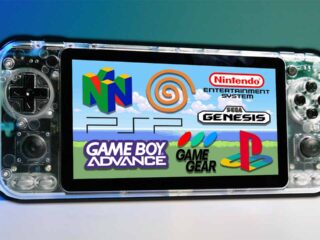 The ODROID GO Super is a new affordable Korean handheld that’s taken a different approach compared to other sub $100 handhelds.

The team behind it known as HardKernel are well known for creating other handhelds, more specifically the ODROID GO Advance which was one of the first affordable handhelds to use the popular RK3326 chip. These chips are now in most of the best retro handhelds on the market, for example the RG351V and the RG351M.

HardKernel has our utmost respect because they have a history of taking risks, and doing things first before its competitors. Albeit they might not do it perfectly, but they’re trying, and that’s more than most in the scene.

We were originally sent a review sample by HardKernel in early February, but unfortunately due to poor shipping the unit broke shortly after setting it up. We informed them that we weren’t happy with the way it was shipped (it was in a bag with no shipping and the box was super damaged), and they kindly sent another one.

But, again, they shipped it in a bag, with no padding halfway across the globe. Thankfully, this unit worked, even if the B button was sticky upon opening, this was probably due to shipping too.

We’re hoping they don’t send customers their handheld the same way they sent it to us, because the chances of your product being damaged is very high.

The box packaging was simple, and came with a USB C cable for charging. Unfortunately the ODROID GO Super does not come with an SD Card meaning you have to buy your own top of the $80 price tag and set it up yourself.

Installing your firmware onto an SD card is fairly easy but for newcomers in the retro handheld scene it can get confusing, and mistakes can be easily made. For that reason alone, this is not a handheld we recommend for those of you that have no experience with retro handhelds.

This was a little disappointing, as that simple feature, and the addition of an SD card could have opened up a lot more sales for those wanting to take a look at a HardKernel product.

How Does The ODROID GO Super Look?

The ODROID Go Super’s biggest selling point is the large 5” LCD display. We know many of you have been asking for a larger screen on handhelds below $100 and here you have it.

The screen is stunning, it’s incredibly crisp, has over saturated colours which we love and the overall size makes playing games a pleasure. Admittedly it is 16:9, so it does have constant black borders on it, but the extra space is very nice.

Due to the sheer size of the screen it adds a new level of comfortability to the handheld, something that you don’t get with the likes of the PiBoy DMG or the GKD Mini.

The transparent shell has some very nice curves to it which sits nicely in our large palms, button placement is good but the buttons themselves… oh boy.

80% of the buttons on the ODROID GO Super feel very low quality, and we wonder why they added what they did.

Yes, you can add stick grips to them, we’ve even seen content creators adding PS Vita sticks to it, but we’re reviewing the product as is.

Moving on, the DPAD is the same, it’s incredibly small, and the directions themselves are thin, making it feel like we have very little control when playing fighting games.

The DPAD itself is small, and there’s plenty of space for a larger one, so we’re not sure why they went down this route, most likely because it was the cheaper ones to source. The Retroid Pocket 2 DPAD on this would have been perfect!

The ABXY buttons are okay, one of ours is sticky and has no feedback due to the poor shipping, yes they’re a little small, but during our review process we’ve had no real issues with these.

Moving to the top of the ODROID Go Super you’ll find a number of buttons and ports. We’re liking the vast choice of ports, and the volume button is a nice touch, placed perfectly in the middle of the device.

However, the shoulder buttons are again, a little disappointing. They’re simple, thin plastic shoulder pads that sit very closely to the button itself, meaning the slightest of touch sets it off with no real feedback.

Heck, they haven’t even added any text to the buttons, letting you know which is which, it’s just a black piece of plastic that feels very “meh”. They could have added some better sticks, perhaps flared ones to add character and value to the handheld, but no, they skipped that part.

While that may feel like we’re hating on the hardware of the ODROID GO Super there are some nice features. Primarily the comfortability and the screen, both go hand in hand, and alongside a transparent shell the handheld generally looks nice.

But the cheap buttons really do ruin the handheld. Now this maybe because they want to keep the handheld at an affordable price, which is fair enough, but there are handhelds are the same price as this with far superior build quality. After shipping costs, this handheld sits at the $100 mark, which makes it compete with some very good handhelds.

Their team is small, we get that, sourcing materials is tough, but they;re not helping themselves with how they ship their products, and the quality of buttons. There’s just far too many shortcuts on this handheld for us to highly recommend it.

How Does The ODROID Go Super Perform?

We’ve reviewed many handhelds that feature the RK3326 chip, and although you can squeeze out a few extra frames if you spend hours in the settings these handhelds typically emulate all the same games.

The RK3326 chip with 1GB of RAM is known to emulate everything up to N64, with a sprinkle of PSP and Dreamcast. And that’s exactly what the ODROID GO Super can emulate.

We tested everything from Gameboy Color, to NES to N64 to PS1. Everything plays fairly well. Frame rates are nice, no screen tearing, the speaker is loud and it plays as it should on a $80 handheld.

But we did notice it started to struggle when we played your average N64 games like Donkey Kong 64 and beyond, heck Golden Eye played like a potato so it goes to show that even some N64 games struggle.

That’s why we recommend you have some expertise in the emulation scene when picking up an ODROID Go Super, because you’ll have to mess around with Retro Arch in order to get most large 3D games to work.

However if you’re happy with PS1 and older than this handheld will perform flawlessly. For N64 and Dreamcast, we advise grabbing something else instead.

The large crisp screen looks stunning when playing games, more specifically Gameboy Advance games, the screen ratio filled up most of the screen and the colours looked natural and bright.

We can see why many of you gamers want a 5” screen, it’s like playing retro games on a Nintendo Switch Lite, and we were mesmerised for hours when testing out the power of this thing.

But you will get fed up with the borders. It’s nice having a large 16:9 screen, but most of the time majority of the screen is black when palying your old retro games.

The ODROID Go Super is the first 5” affordable handheld on the market, HardKernel have huge plans, but sometimes their execution is a little dull.

The screen size is great, they picked the perfect screen, the size of the shell and curved aesthetic adds a very comfortable form factor to the device, meaning we could play for hours on end without our hands aching.

The large 4000mah battery gives us confidence when taking this out for a few days, knowing we can squeeze 6+ hours out of it.

But the low quality analogue sticks, terrible shoulder buttons and miniscule action buttons makes it hard for us to love playing on this device. It just feels “ok”, and this ever growing competition eats “ok” for breakfast.

This isn’t to say not to keep an eye on HardKernel, they’re edging their way to something special, I can feel it. It just feels like they need some more money in the bank to really invest into higher quality design.

We’re cheering HardKernel all the way, but for now, we can’t recommend the ODROID Go Super, even if it has one of the best displays we’ve seen on an affordable handheld.