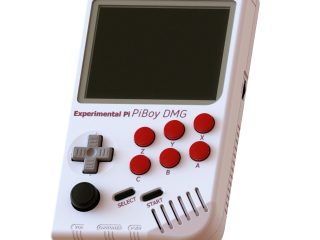 Pi4 at its finest

The PiBoy DMG made by Experimental Pi is one of the best retropie handhelds that uses the new Raspberry Pi 4 kit in order to emulate all of your old school games.

They use the form factor of the old school DMG to give it a nostalgic touch and then jam it full of the latest technology plus enough buttons to play anything comfortably.

It was originally released as a DIY kit but the team behind the PiBoy DMG have now launched an “assembled” edition for $189.95. So for those of you that don’t have any knowledge of building your handhelds, this is great.

If you’ve been following news about the Raspberry Pi 4 you may have heard that it likes to overheat, but the PiBoy DMG boasts an internal fan to keep your handheld cool, and to stop it from overheating.

We’ve been using it for over a week now and can confirm, we’ve had no overheating issues whatsoever.

It’s got some power behind it that’s for sure, and a crispy display. You can buy this as a kit to do yourself if you have a Pi 4B, Pi 3B or Pi Zero, or you can buy the assembled kit like we did that comes pre-loaded with RetroPie.

It does not come preloaded with games, that would be illegal. You have to install ROM’s yourself. Do some research before downloading ROMs as we cannot legally recommend doing it.

I know that there are a few grey areas surrounding the world of ROMs, but the market for handheld emulators and clone consoles is thriving and is bigger now than it has ever been.

The PiBoy DMG is basically a Gameboy on steroids and we absolutely love it. Firstly, let’s talk about the design, and why it looks like it does.

The Gameboy DMG is undoubtedly a comfortable handheld, and its design revolutionised the way handheld games consoles are manufactured.

Still to this day, we are using the same vertical design, because it’s comfortable and portable.

The PiBoy DMG features a 3.5” display with a resolution of 640 x 480, it’s a crispy, bright display that screams with colour, they chose wisely.

Below that you’ll see the face jam packed with buttons, but that’s for good reason. It features a  D-PAD that closely resembles the original Gameboy.

Below that a Nintendo Switch analogue stick that you can press for R3. Near that, your start select buttons which have been enlarged for easy pressing.

Then, the six buttons, this is used for N64 and other games consoles, and this is what some of the best retro handhelds lack, six buttons. These are DMG styled and are quite large, you’ll never miss them.

On top of the PiBoy DMG you will see 4 USB ports, an ethernet port and your ON/OFF switch. The reason behind so many USB ports is simple, it’s because you can use this as a home console.

Simply hook up your HDMI cable to the port on the left hand side, plug it into your TV, connect wired or wireless (using bluetooth) controllers and you now have a portable gaming machine, capable of holding Mario Kart 64 tournaments.

Some may say this many ports looks ugly, and we’ll agree, but it adds one of the best features, so we can’t complain.

On the right handside you have a brightness wheel, and at the bottom you have your headphone jack a volume wheel and… wait. Is that a Micro-USB port? That’s right, not even USB-C, oh dear.

On the back of the PiBoy DMG ExperimentalPI have gone all out nostalgia. They have added in a Gameboy cart design to the back, to make it really look like a Gameboy.

Below that are two trigger buttons that sit into the handheld to keep it flush with the back. You can swap them out for the purple variants to match the buttons, these are added free of charge into every PiBoy DMG purchase.

Finally, on the back at the bottom is your battery pack, again, the door is identical to the old school Gameboy and it will house your 4500MAH battery.

Overall, design wise, this thing looks and feels like the OG Gameboy. Some may like that, some may not, but we do.

The screen is what impressed us the most, this thing is VIVID, it’s crispy and makes you go “dang” when you first turn it on.

It weighs a fair bit too, this is the kind of handheld that you’ll need a belt for if you plan to chuck it in your back pocket.

We just wish they added USB-C to their device, this gives it that modern kick, using Micro USB just seems odd. Admittedly it’s probably cheaper, but it makes the handheld feel old.

You will not be disappointed with the performance of the PiBoy DMG, especially if you have 4GB of RAM.

The Raspberry Pi4 is an absolute beast, we like to play some of the best Dreamcast games around and this thing was handling it very well. As you can see in the video above, Crazy Taxi ran flawlessly.

If you’re new to RetroPie, it’s simply a piece of software that you install onto your Raspberry Pi that allows you to play and emulate a bunch of your old school games.

RetroPie is so advanced now that it has a great, easy to use interface that lets you access all of your games from an SD card.

Turn on your PiBoy DMG, and you’ll be greeted with a lovely menu, ready to play your games with the press of a button. It’s so advanced that it can even play newer consoles, such as Gamecube and Nintendo DS if that hardware can match it.

What’s the oldest console it can play at silky smooth frame rates? That would be PSP and Dreamcast. The PiBoy DMG can run Dreamcast, PSP, Nintendo 64 and even Playstation 1 games without any problems.

Making this, a seriously powerful handheld. Technically it can play PC games, Gamecube games and even Xbox games, but that’s using it as a streaming device and not technically using the Pi4.

So if you want to use the PiBoy DMG as a portable retro gaming device, then you will absolutely love it. Playing PSP games on a Gameboy just feels odd, but in a good way.

This is a very powerful handheld, with future software updates which will undoubtedly make this gaming device better and better.

You can save games from exact frames, you can load cheats, speed up games and even wireless coop should you want to dive deep into RetroPie (not for beginners).

It’s one of the best retropie handhelds we’ve played with, and that’s because the Pi4 just opens up a tonne more possibilities for gamers.

The PiBoy DMG is aimed at those that want a very powerful handheld that has the ability to play a wide number of consoles, all while being open source, allowing you to change things as and when you please, because let’s face it the Pi 4 is basically a PC.

It also comes from a respectable brand that’s always there waiting to help you if you need it. Have a problem? Need advice? ExperimentalPi will be there for you in hours, helping you, step by step, and to us, that can sometimes be priceless.

This is a retropie handheld to pick up, for sure.