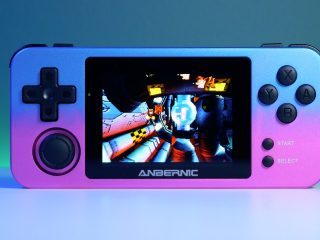 The RG280M is a new retro handheld on the block, that just so happens to be the smaller brother to the popular RG350M.

ANBERNIC was right to release a smaller more portable handheld to go alongside this, but it just seems to be a little late to the party, they should have released this alongside the RG350M months ago.

It has the exact same internals as the RG350, as it uses the J4770 processor, so don’t think smaller is less powerful, the RG280M packs a punch.

This handheld is aimed at those that want build quality over power. ANBERNIC know how to make metal handhelds, and once you hold the RG280M, it feels like the Gameboy Advance just got a brand new overhaul.

But has ANERBNIC left it too late? Have they priced it correctly? Have they cut corners with build quality? Will it be on our best retro handhelds list? Let’s answer those for you.

What Can The RG280M Emulate?

THE RG280M is a powerful handheld, although it can only emulate up to PS1 games. But for us, and many consumers out there, that’s all we need. N64 and Dreamcast would have been nice, but we can imagine that will be coming to the updated versions towards 2021.

The RG280M can emulate the following:

The RG280M is a small, chunky, heavy handheld. It feels premium, durable and if a company has actually tried to impress its customers rather than deceive them, like most handhelds out of China.

The small 2.8″ display is crispy, bright, saturated and perfect for playing the best Gameboy Advance games, due to its 320 x 480 resolution.

The face buttons are located perfectly, with the D-PAD above the analogue stick. Just like the RG350 the ABXY buttons and DPAD are highly responsive, with a soft click feature that lets you know that you’re pressing it.

Along the top you have four shoulder buttons, a mandatory in any new handheld. Between them, two USB-C ports for charging and controllers plus a headphone jack.

On the sides you have a power button and volume control. At the bottom two SD card slots and a reset button. It has two, because one is for the firmware, and the other is for ROMs. Many of you will be happy to know that the RG280M is pack with thousands of pre-installed ROMs.

It’s worth mentioning that the speakers are perfectly placed at the bottom of the RG280M. Staying out the way of your hands and fingers.

It’s a fairly thick handheld too, coming in at over 1″ thick. We feel as if this could have been made a little slimmer, but it used a lot of the same internals as it’s bigger brother, so to cut costs they used the same shell designs, just with a smaller screen.

The thickness doesn’t bother us in anyway, if anything, it makes the handheld feel much comfier than the slim Bittboy Pocket Go.

Some of you may not like the large bezels around the screen. It makes the handheld look a little outdated, and if anything, we wish thy removed bezels entirely. But hey, no handheld is perfect.

You don’t buy the RG280M for power, you buy it for build quality, period.

After testing the RG280M’s emulation power for many hours we were happy with what it can do for the price. We had very little problems with emulating 3D games, fast paced Gameboy games or lots of noise.

The RG280M is a great performer if you’re looking for pocket power. Gameboy games ran flawlessly, PS1 games felt fluid and crisp and even the older SNES games didn’t drop frame rates, nor did it show any signs of screen tearing.

ANBERNIC are really starting to show the world that they mean business. The quality control is great, and we trust what they say when we read their spec sheet.

Because the RG280M has the same internals as a RG350, but with a smaller screen, it means you get a lot longer battery life too. And we mean A LOT longer.

The RG280M would last us between 5 – 6 hours on a single charge, on smaller, less power consuming games and a slightly reduced brightness we saw upwards of 6 hours game time on this thing. That’s incredible and one of the great features about the RG280M.

If you’re into your Gameboy Advance games, then this is a great choice, it has pixel perfect scaling of GBA games on this little screen, making it feel like the real deal.

With any handheld emulator, you can save your game from any frame, you can change the screen format, for you crazy ones that like to play stretched. You can also load cheats, speed up and more, all with the press of select and start in game.

The RG280M is not a perfect handheld, even though we want it to be. For some odd reason the RG280M is being priced at $109, that’s only $20 less than its big brother, and $40 more than the incredibly powerful RK2020 that can emulate the best Dreamcast games.

Admittedly it has that lovely new gradient shell which looks as if we could eat it, but the chip used in the RG280M is old and outdated. This is probably the last handheld to come out of China using this chip.

Why they released it when they did, we do not know. Perhaps the pandemic extended its release date significantly or ANBERNIC planned for customers to buy one in addition to the RG350M?

If this was priced at $70 this would be an absolute steal, and we’d rank it much higher than we did in this review.

The RG280M is a perfectly built handheld, with superb quality, a beautiful screen, incredible battery life and a lovely new gradient shell.

The pocket form makes it great for portability and the 2500MAH battery life gives you a whole day of use, but this handheld is priced so awkwardly it’s really hard for us to reccomend.

For less you can get something more powerful, and for $20 more, you can get the RG350M which has a bigger screen and an extra analogue stick. Or you can wait a few months and pick up the rumoured RG351P a plastic RG350 with the power of the RK2020.

Perhaps down the future, they’ll make the RG281M, and hopefully it’ll be the same, if not cheaper than the RG280.

There’s too much choice, and too much to look forward to to recommend the RG280M, which is sad, as this is a perfectly crafted little handheld.