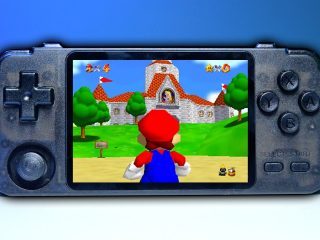 A good clone with problems

The RK2020 handheld is one of 2020’s most powerful Chinese retro handhelds. But it has a lot of problems, some that the average consumer may not know about, but we’ll get on to that shortly.

The RK2020 starts at $65, which is considerably less than some older, less powerful handhelds, like the RG350M and the Bittboy Pocket Go V2 so it’s priced very competitively and it’s what makes the RK2020 so desirable.

For those new to Chinese retro handhelds, the RK2020 is a handheld games console designed to emulate your old school games.

China are becoming the go-to source for high end handhelds, especially for those of us that love emulation. Each day they’re making it easier for the average gamer to use, opening it up to a whole new market.

This RK2020 handheld is special because it has the power to emulate Nintendo 64 and Dreamcast games for an incredibly good price. Other handhelds that can emulate to this standard are usually above the $100 mark, and have many flaws.

The RK2020 is in no way perfect, but for the price, and build quality it’s certainly worthy of a pick up for those wanting one of the best retro handhelds of 2020.

For a handheld priced at $65 this is some serious power, and because of the 1GB memory which is rare in handhelds, this allows for the higher end consoles to be emulated well.

What Games Can The RK2020 Emulate?

That’s a wide list of games consoles that the RK2020 can emulate, if need be you can install your own emulators, some are managing to install Nintendo DS emulation on here, but we can confirm it doesn’t work well. Simply because the RK2020 handheld only has… well, one screen.

One BIG Problem About The RK2020

Lucky for us, we held off on publishing our review for a few days because the RK2020 was apparently facing legal bombardments from the makers of the ODROID GO Advance.

This is because the RK2020 is actually a direct clone of the ODROID GO Advance, it’s so identical that the team behind the OGA are actually trying to stop the RK2020 from using their firmware.

The first batch of RK2020’s (including ours) came shipped with OGA firmware, and it works great straight out of the box. But now that they have been caught stealing firmware, they have had to change to a different Retro Arch system.

We don’t condone stealing, but the OGA lacked build quality, and they had very limited quantity of their handheld. Because it’s China, and copyright law is near non-existent another company came along, replicated it, made it much better quality and shipped it on demand with tonnes of stock.

This allows gamers to actually get the OGA but in a different form, under a different name. Now, we didn’t know it was a clone of the OGA until we received it, but it seems the RK2020 team has had to uninstall any firmware from the OGA to dodge any legal fines.

Because of this, it ruins the handheld completely. They should be making custom firmware for their handheld, if they don’t they’ll lose out on hundreds of thousands of dollars. It’s lucky that they’ve now started to ship it with firmware.

You can download community made firmware from the internet for the RK2020, it’s just a hassle to do so. Especially for those of you that have never done it before, so if you don’t like Retro Arch, you can change it.

So we thought we’d mention this issue before going deeper into our review, so we’ll carry on as if the RK2020 has firmware, which it now does.

When you order the RK2020 you’ll receive it in a very average box, this is standard for Chinese handhelds, there’s not been one handheld out of China that has had a decent unboxing experience.

The RK2020 has 3.5” IPS display that looks great, the viewing angles are strong, it’s bright enough to be viewed outside and crisp enough for PSP emulation to look good. The screen cover is plastic, not glass unfortunately.

One major feature we noticed on the RK2020 is the large buttons, the DPAD and the ABXY buttons are bigger than most other handhelds, which we like. I personally have quite large hands, so having a chunky DPAD helps with gameplay.

On the bottom left of the face you are greeted with the DPAD, and because this handheld is a direct clone to the ODROID GO Advance, it still has that awful stick. Oh, and it has no R3 click.

It’s so awful in fact that they’ve had to give you a free analogue stick cover in the box. This helps, but like we said in our video, you can’t polish a turd.

You’ll also find the START/SELECT buttons on the face too. On top of the RK2020 you’ll be greeted with four shoulder buttons, ON/OFF button, headphone jack, a USB C port for charging and a USB port for installing your firmware and transferring files.

On the bottom you have your SD card slot and a reset button. The back of the RK2020 is very plain, and due to the slightly transparent shell you can see the interior.

The build quality is far better then the OGA, but it’s still pretty average, there’s nothing special about the way the RK2020 looks. It’s very plain, it’s missing a volume wheel, the shoulder buttons move a lot because they’re not tight, and there’s no HDMI out. Meh.

Where the RK202 lacks in build quality, it makes up for in performance. The 1GB RAM, teamed up with the quad core processor makes for a superb handheld. This pocket console can play anything you chuck at it.

Dreamcast emulation played very well, and it’s the first handheld out of China that we’ve tested that can emulate this standard under $70.

In fact when we loaded up the best Dreamcast games to play, we said out loud “China are really doing it, aren’t they?”.

Playing Dreamcast games on such a small, cheap handheld blew us away. It’s astonishing at what this little handheld can do. We then tested N64 and even though there isn’t really enough buttons and it needed button mapping it performed incredibly well!

Yes, there were some frame rate drops now and then, but it didn’t really effect gameplay at all! We then tested some more strenuous gameplay on the PSP and it played well, we enjoyed kicking ass for an hour or so without and major hiccups.

Once you start testing larger, faster 3D games on the PSP you do notice some dips in frame rates, and some audio cracking, but these didn’t happen often. If you want silky smooth PSP gameplay, then this might not be for you.

We’re very impressed with what the RK2020 can emulate, and it goes to show that China are really pumping out handhelds that can emulate more and more, every few months. Soon, we’ll be seeing bigger and better consoles.

We can’t ignore that the RK2020 has stolen designs and firmware from the ODROID Go Advance, it’s unprofessional, unethical, and we feel supporting a brand that has done this is probably wrong.

But the makers of the RK2020 has acknowledged this and removed the firmware, admittedly its not the best thing to do for sales, but its good to see they are willing to sacrifice sells for authenticity.

If we put that to the back of our minds, the RK2020 is a great handheld, it can emulate anything you chuck at it, and having a Dreamcast and N64 in your pocket is something we’ve wanted for a while now.

But, the build quality just isn’t up to scratch. It uses cheap plastic for its shell, the analogue stick is incredibly bad, there’s not volume wheel and everything about the exterior scream average.

Why can’t these Chinese companies give us the power of the RK2020, the build quality of the RG350M and the controller functions of the Q400 handheld? Now that would be a great handheld.

The RK2020 performs great, but looks and feels like it came from the 90’s. If you want a powerful pocket console, then this is for you, but we recommend waiting for a few months, because no doubt something of better quality will come out that can perform just as good as this.