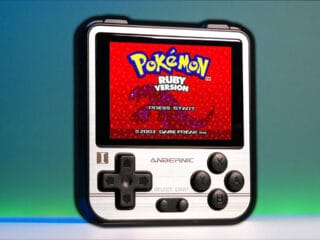 Pocket Power That Will Last

The RG280V is the latest handheld on the block to take on the new vertical form factor trend, and if anyone can do it right, it’s ANBERNIC.

Many of the best retro handhelds have been made by ANBERNIC but it’s their first handheld to take on this new portable, Gameboy Mini aesthetic.

At first, when we saw the images leak through the Retro Gamers Facebook Group, we were sceptical. It looked too small to play on comfortably, and the buttons looked close together.

But boy, were we wrong!

It also seems like ANBERNIC have started a trend, as other handhelds like the GKD Mini and the Powkiddy RGB20 have hopped on the vertical handheld train.

Let’s jump in to our full review of the RG280V!

Just like the RG351P the RG280V is built with precision and reliability. When we opened up the box, our first impressions were “Oh, okay!”, and this was a direct compliment to the size of the handheld. It’s a thick boy for sure.

On the front of the RG280V, you are greeted with a large 2.8″ display with a premium glass cover. The bezels are fairly small making the screen look bigger than it actually is. The screen itself takes up over 60% of the face.

The 4:3 ratio and bright nature of the screen are stunning. The viewing angles are superb; it’s saturated and is one of the best features about the handheld. Packing such a nice screen into such a compact handheld was a great shout by the manufacturers.

Below that is the DPAD which works as it should (it’s the same DPAD used in the RG351P). You also have the START/SELECT buttons, and the soft-touch ABXY buttons. The ABXY buttons must have a new silicone pad underneath as there’s little to no click. This adds a nice premium touch in our opinion!

On the right-hand side, you have a reset button and an on/off button. These are an awkward size, and for our large fingers, we had to use our fingernails most of the time, especially pressing the reset button. Ideally, we would have liked these to be a bit bigger.

Moving up top, you have four shoulder buttons, a headphone jack, and your USB-C port for charging. The shoulder buttons are great, and it’s a weird design that we’ve never seen before. Still, it works well. The L1/R1 buttons wrap slightly around the back of the R2/L2 buttons which give it a bit of extra space to press.

On the left-hand side, you have your volume buttons and two SD card slots. One is for the RG280V’s internal software (do not remove this) and the other is for installing your own ROMs.

Then finally on the back, you have a centralised speaker that’s fairly loud and sits out of the way of your fingers. The only downfall, which is very minor, might we add, is that if the RG280V is laid down, the speaker is blocked.

The RG280V feels like a sturdy product, one that has been built correctly. There’s no rattling, no shaking of loose buttons or errors with the design. Like any ANBERNIC product, it’s one that will last you for years to come, and that’s not easy to say about retro handhelds from China.

Many will think playing on a vertical handheld with buttons so low down may feel weird, but it doesn’t. Because your index fingers slide up the side of the handheld, this adds a lot of security to the console when playing.

ANBERNIC have done a great job of making this handheld feel premium, and who knows, they may come out with a metal variant like they did with the RG350M!

How Does The RG280V Perform?

The RG280V is admittedly not the most powerful handheld on the market below $100. The Retroid Pocket 2 is the same price and can do far more, but the RG280V is targeting a different audience.

The RG280V is targeting retro gamers who want a more portable console, and those who want superb build quality that lasts.

Because it’s using OpenDingux, this handheld will never depreciate as an Android operating system does over time. You can store this in your wardrobe for years, and it will work as fast as it did the day you unboxed it.

What Can The RG280V Emulate?

The RG280V is using an older chip, one that’s used in the RG350M which is almost a year old now. Still, the RG280V can emulate the following retro games consoles:

Any Problems With Emulation?

Emulation worked very well throughout most of our tests. This is a small handheld, so fast-paced games get a little stressful at times and our hands started to get a little tight when we were pressing buttons as fast as we could.

The RG280V is for those of you that want to play any retro games up to the Playstation 1. Some of the best PS1 games like Crash Bandicoot worked flawlessly and there was no signs of dropped frame rates or even slowed audio.

Those wanting N64 emulation may be disappointed. You will have to install your own N64 emulators to get it to work, and even then, it’s just awkward on the RG280 due to the lack of buttons and no analogue sticks.

It does work; we tried and tested some N64 games that worked “ok”, but this isn’t a handheld we enjoyed playing the best N64 games on.

For those new to retro handhelds, the Open Dingux UI is a little… plain, but that’s for good reason. The simple no BS UI will keep your handheld from slowing down and being all clunky like Android operating systems. You just have to get use to it.

The RG280V does not come preinstalled with games. Usually, these handhelds do, but our unit did not come with games. We had to install our own ROMs, so if you’re wanting it to be “pick up and play”, then think again.

The RG280V is a great handheld, and one we thought we’d dislike. It’s bigger than you think, and you’ll understand what we mean when you hold it for the first time.

This console isn’t thick; it’s just wide, and the display takes up most of the face of the handheld making it look even wider than it is.

It’s very pocket friendly, and the bright screen with the glass cover adds a very premium feel to the console, despite it being made of plastic.

There’s no HDMI and no analogue stick, but we don’t mind too much as this is a handheld that’s best played on the go with older retro games in mind.

The price is what knocks our score down slightly. It’s priced at $80, which is a tad high in our opinion, especially because it’s using an old chip that can be found much cheaper in year-old handhelds.

If ANBERNIC priced this at $60, then it would be the best $60 handheld to date, but the high price tag puts it in competition with the Retroid Pocket 2, which as you know we love. That thing can even emulate some of the best Dreamcast games.

But, the new vertical form factor is a nice refreshing touch for retro handheld collectors, and we’re liking it so far!

Do we recommend it over the RG351P? No. Still, if you like the vertical form factor, then go for it. You won’t be disappointed.