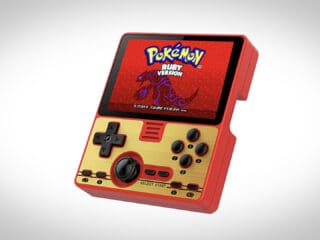 The Powkiddy RGB20 is the latest vertical retro handheld on the market, and it’s a mighty one at that! Not only is it packing some nice power but its packing size too. This thing is big!

The only problem with a handheld of this nature, is that the design can be easily hated, and the Powkiddy RGB20 has a few features that help with that.

For those new to Powkiddy, they’re a toy and electronics manufacturer from China, and they’ve made a wide number of handhelds, most which never make it into our best retro handhelds list, but nonetheless the RGB20 is going in the right direction.

Now it’s no SEGA Venus, the Powkiddy RGB20 has its flaws, but doesn’t every sub $100 handheld?

Like any handheld emulator we do not advise downloading ROMs for these handhelds. Use your own ROMs or the files of your owned games.

Just like the RG280V this vertical handheld comes with a number of features. The Powkiddy RGB20 is a very… compact handheld, and it almost feels a bit overwhelming to look at, but that’s for good reason.

On the front you’ll be greeted with a large 3.5″ IPS display that sits neatly at the top of the handheld. It’s unusual for a handheld of this size to have such a large display, but its what makes the handheld. The screen made the RGB20 the size that it is.

While we’re talking about size, we must say how shocked we were when we opened the box. This thing is larger than you expect, it’s a bloody handful that’s for sure! The average hand will be stretched to fit it in.

Below the screen you’ll see a lot of buttons, sticks and pads, that’s because the Powkiddy RGB20 is actually a clone of the ODROID GO Advance, using both the same external buttons and software.

You have the DPAD, an analogue stick that sits in the shell (Nintendo Switch stick), your ABXY buttons, start/select and your extra buttons that are used for menus, saving, and more.

The Powkiddy RGB20 also has the speaker grill in the front and features a famicom look with the red shell and gold metal faceplate at the front.

On the left hand side you have your on/off button with a reset switch, then on top your SD card slot, two USB-C ports for charging, a headphone jack and your wifi switch.

But whats very different about this handheld is the fact that the shoulder buttons since inside the case within a little cutout around the back. This is the first time we’ve ever seen a layout like this and thats for a good reason.

Yes, four shoulder buttons on a handheld is somewhat mandatory nowadays, but at least make them some what comfortable. Our fingers felt cramped inside this cutout, and the shoulder buttons themselves are incredibly small, almost the same size as the ABXY buttons!

Why they didn’t add flared shoulder buttons like the Retroid Pocket 2 we do not know, as this would have made it a much more comfortable handheld. But this is a prime example of Powkiddy not doing market research and doing their own thing as usual.

Coming back to the screen we want to quickly mention how nice it is, like most handhelds out now, the screens are getting better and better. Powkiddy has not cut corners with this IPS display, and it sits very close to the screen which is great, so there’s now gaps to be seen.

The viewing angles are also great and it’s just an all round nice display used in the Powkiddy RGB20. Comparing it to ANBERNIC’s recent RG280V it doesn’t have the same build quality, the plastic shell used is slightly less strudy, and the side buttons (on/off and reset) are quite thin and cheap.

But this was to be expected as ANERBNIC’s build quality in their other products like the RG351P and the RG350M are top notch. The Powkiddy RGB20 still feels great, and it’s one of Powkiddy’s best, but they still have some way to go.

We should also mention that there’s no volume buttons, meaning you have to hold select, and press up and down during the game to turn it down. We like our buttons! This would cost pennies to add!

What Can The Powkiddy RGB20 Emulate?

The Powkiddy RGB20 is running the same chip as the RK2020, so if you’re familiar with that handheld, this will basically run the same games.

How Does The RGB20 Perform?

We are starting to get bored writing these sections of retro handhelds reviews, because they all only really use a handful of different chips, and the handhelds under $100 can all basically emulate the same thing. Some struggle with the larger consoles like playing the best Dreamcast games etc, and some do not, but it’s really all the same power in the sub $100 category.

The Powkiddy RGB20 handled most of the games we chucked at it, and that’s because it has that quad-core 1.5GHZ chip inside with 1GB RAM. Even Dreamcast games run well, with very minor frame rate drops playing Sonic Adventure 2 is an absolute blast.

Nintendo 64 games run okay too, but the lack of buttons make it a tad awkward as you have to map keys to the tiny little II & V buttons at the bottom, so it’s not entirely enjoyable, but it can emulate the console fairly well.

All of the other smaller consoles like Gameboy, Famicom, NES and beyond run perfectly fine. Like any retro handheld using EMUELEC, you also have the ability to save games, load games, change screen aspect ratios, add game art and more.

EMUELC is the software used and generally makes a great user experience as the UI is so easy to use, for both children and us oldies.

Our Powkiddy RGB20 came preloaded with hundreds of games, now I don’t know if every RGB20 comes pre-loaded but this one we purchased from AliExpress did. It’s not guaranteed, but we thought we would mention it.

And that brings us on to the “pick up and play factor”. do you need to map keys? Do you need to tweak settings in order to get some consoles to run? No and no. You can play Dreamcast, N64 and PSP games straight out of the box without any messing around!

This itself is underrated. We got a bit of hate in our Retroid Pocket 2 review for this, because as you know the RP2 took hours of tweaking before you could play your games, which shouldn’t be a thing.

It looks like many retro handheld makers have heard this problem, and are now bringing out handhelds that work and play straight out of the box. Lovely!

The Powkiddy RGB20 is Powkiddy’s most ambitious handheld yet. Many of their handhelds are awful, lack build quality and barely perform, but the RGB20 has surpised us.

It’s a handheld we both love and hate. It was so close to being perfect for vertical handheld lovers, but missed the mark with its cramped shoulder buttons, low quality shell and lack of a volume wheel.

But putting that aside, this is a very powerful handheld for those that want a vertical form factor and a stunning display. Yes, the buttons are overwhelming, if they removed them, they would have had space for 6 action buttons, making it perfect for playing the best N64 games.

But no, they cloned the ODROID GO Advance, into an average shell and hope it sells. Which it will, because we actually prefer it to the RG280V, only because of the power within and the analogue stick.

But we think the price will push away gamers who are intrigued. The question “should you buy it?” is a very hard one to answer, because it’s great in its own way, but the quality doesn’t mach the $90 price tag.

If this was a $60 handheld, it would sell like hot cakes and we’d be willing to give it a much better score. That aside, it still has a place in our collection, and it’s good to see these vertical handhelds growing in popularity.