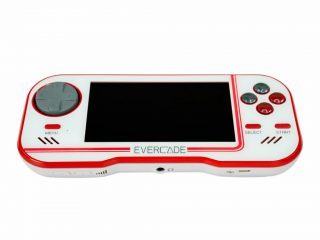 It’s about time a handheld worth looking at was released out of the UK! 2020 has revealed some of the best retro handhelds around but can the Evercade rival the likes of the RG350M or the Bittboy Pocket Go V2? Let’s take a look.

The Evercade is a handheld games console that plays multi game cartridges from a wide number of old retro consoles. These cartridges are sold by Evercade themselves meaning you will have to buy them individually if you want to play new games.

Priced at $69.99 it’s sitting itself next to some other, powerful handheld emulators from China which have a very similar target audience without the need to buy games, but the Evercade has a few hidden features up its sleeve.

The team behind it wanted to create a new, authentic retro gaming experience with the ability to make gaming physical again, and they did just that.

Evercade have now recently launched the Evercade VS a brand new couch co-op based retro gaming console. Be sure to check out our review.

How Does The Evercade Feel?

The Evercade is a fairly large, thick handheld, similar to the size of a pint glass and the thickness of a classic DMG Gameboy. It has a very retro, arcade aesthetic to it, as you can probably imagine why!

We have the white and red edition, which looks nostalgic, especially with the graphic going across the face of the console but you can also pick up a limited edition black variant too.

You are first greeted with the 4.5″ display that can play games in 4:3 or 16:9 ratio if you don’t mind the stretching. It’s an average quality screen, it didn’t blow us away, but the size was very welcomed.

The viewing angles are very poor, with the slightest of movement, you will notice the classic white glare that you get from cheap screens and it only has a resolution of 480 x 272. For obvious reasons you don’t need a lot of pixels to see retro games clearly, but it would’ve been nice to see a HD screen. However, the screen size is very nice, and does help with immersion.

Going from this back to the ODROID GO Advance is a struggle because that extra inch helps with console distance, meaning you’re not pulling it closer and closer to your face all the time.

Still on the face, you have a large circular D-PAD which reminds us of playing some of the best Sega CD games, this also helps with shooting games. Some of you may have liked a classic D-PAD, but unfortunately these are not interchangeable.

On the other side, you have your ABXY buttons, which are some what basic. There’s nothing special about them, they feel, and look like they should and come with a nice font type that matches the Evercade look.

You will also find your MENU, select and start buttons on the face too. We would’ve liked to see the Evercade team add metal buttons to the console.

A metal DPAD and ABXY buttons would have seriously up’ed the feel of this console, and the use of a plastic screen/face plate makes it feel cheap. If they added glass alongside metal buttons this would have transformed the handheld into a premium looking games console that we would have proudly placed in our games cabinet.

Obviously this would have increased the price, but we really think this small change would have made this product seriously great for fellow retro games collectors to shout about.

Around the sides of the Evercade you have some seriously nice, soft touch shoulder buttons that we absolutely love.

They’re designed perfectly to sit your finger and have a nice soft click response when pressed, they sit very close to the internal trigger allowing for quick fire gameplay.

Between that is the HDMI out which allows you to play 720p Evercade games on your TV, the cartridge slot, and the on/off button.

We need to talk about the cartridge slot, and need to apologise about how negative this review is so far, but trust us, it goes up hill from here.

But first, we need to explain why the cartridge slot is so disappointing, even though it “makes” the Evercade. It might be our review unit, but when we slot in our cartridges, it’s incredibly stiff, the slot itself is so tight, that we’re forcing the cartridges in with a lot of strength, making the classic “click” of a cartridge non-existent.

We wanted cartridges to fall and then “slot” in, just like a Gameboy when it makes the “shlock” sound. But now, we’re forcing the cartridges in so hard, that a few occasions we’ve almost dropped the handheld. And don’t get us started about removing it, it’s just as hard and unsatisfying.

Finally, on the bottom of the Evercade you have your volume up/down buttons, a headphone jack that is placed perfectly at the bottom, many handheld companies feel like the top is best, but that makes the wiring incredibly awkward.

Next to that you have a Micro USB slot, as we mentioned in the Retroid Pocket review, we don’t understand why companies aren’t using Micro USB-C in 2020? The Evercade does have an impressive 4 hour game time on its 2000 MAH battery, so don’t expect to be running out of battery in one game session.

The Evercade is the perfect weight, the perfect size, and has the perfect triggers, but the plastic face, tight cartridge slot and low quality screen brings the score down.

They were so close to making this thing feel valuable, and with the addition of glass, and some metal buttons they would have hit the nail on the head, and our review score would have been much, much higher.

But if you’re not bothered by build quality, and like that the price is very competitive, than you’ll love how the Evercade feels! Now, let’s talk about what the Evercade does well.

Without a doubt, the best feature about the Evercade is the ability to collect and buy physical cartridges. In our opinion, it’s what makes the Evercade so dang nostalgic.

The excitement of researching the games, ordering a cartridge, opening the case, reading the manual and inserting it into your Evercade makes us fall in love with the handheld. For so long, we’ve been reviewing retropie handhelds and we’ve lost the feeling of inserting a cartridge.

Admittedly, it’s not as sensational as inserting a game into the Nintendo 64 handheld, but the whole game buying experience feels like the good ol’ days, and that’s exactly why you should buy the Evercade.

The cases are adorable, they’re slightly smaller than a Nintendo Switch case, and comes with a user manual that tells you what each games is about, and how to play it.

We can’t remember the last time we’ve done this, but doing this alone punches us right in the nostalgia rib cage and we absolutely love it.

Each cartridge costs $19.99 which, yes is slightly higher than we would like but you’re getting up to 20 classic games to keep you occupied. If your friend has an Evercade you can even trade games, again, like the good old days. Below is a list of the games that you can buy for the Evercade:

That’s over 120 games to choose from, most coming from the 1980’s era and a few from the 90’s. They have the licenses from every single developer, allowing them to play them with perfect quality, just like the originals. Evercade have even mentioned the release of more cartridges throughout the year. You can view their lineup here.

As much as there’s a wide collection some of your favourite games might not be on there, and probably never will if they’ve been developed by Sega or Nintendo, but that’s just something we are all going to have to deal with.

We are very interested to see what other games they come out with and what other developers they work with.

Like any handheld it all comes down to the gameplay. The Evercade plays games incredibly well, with zero, and we mean zero problems, frame rate drops or screen tearing is non existent. Because they have the license to all of these games they don’t rely any low quality ROMs or game files, they get the real deal, straight from the developers themselves.

Every cartridge, and every game has run flawlessly on the Evercade. When you go from any other cheap Chinese handheld to this, you can instantly tell the difference and it really feels like you’re playing on the real console from back in the day.

When you load up a game from the cartridge menu, you can press the “menu” button on the Evercade to get into the in-game menu which features through the Evercade. This allows access to save states, loads states and settings. Like the Analogue Pocket, you can save directly from the menu, and load it back up on the exact frame, meaning no more having to skip dinner to get to the next check point.

If you go down to settings you can change the screen ratio from original size, to full screen. Full screen mode will stretch your games into a 16:9 aspect ratio.

As much as the D-Pad is large, and a bit too flexible, we actually enjoyed playing on it. Response time across the buttons was perfect and the fact there was no button mapping needed was a nice addition, allowing you to pick up and play without worrying about button layouts.

The triggers are perfect and we like how they curve, slightly around the sides of the Evercade, allowing those with smaller hands such as kids the ability to press them.

We’ve personally never been a fan of text inside of buttons, and we stick by that when we see the Evercade, we would have liked to see them embossed, or even blank, but gameplay wise, they were fine, large enough to press and far enough apart to not accidentally hit.

Overall Opinions Of The Evercade

It’s perfectly priced to welcome all retro gamers, it plays games smoothly and looks the part in any handheld collection. It’s an incredibly nostalgic handheld, and one we feel we can give younger family members to also enjoy.

But what makes the Evercade so great, is the ability to buy and collect cartridges. We didn’t know how much we missed opening a box, reading the manual and preparing ourselves to take on the end boss of a game until we started reviewing the Evercade.

At $19.99 for a cartridge, it honestly isn’t bad, many will argue to just download ROMs, but the Evercade targets a total different audience. It’s targeting the collectors, not the average retro gamer. It’s found a niche, and that niche loves it back.

Yes, it’s not perfect. Yes, it doesn’t have the best games collection in the world, but for $59.99 it’s a worthy pick up for those of you that are in love with Namco, Interplay, Atari and small games developers from the 80’s/90’s period.

If you can’t afford it as of now, because of the economic crisis wait until the end of the year, you’ll most likely see a small discount, and you can see what new games they have released in the mean time.