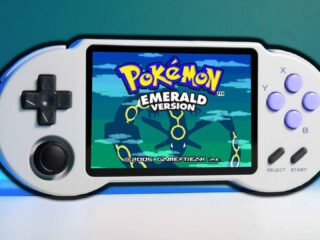 For those of you new to Chinese retro handhelds, you may think that these are a little “shady”, and we’ll be honest, at times they are (customer service) but there’s nothing illegal about buying these retro handhelds. The only “illegal” part is downloading ROMs of games you do not own.

The PocketGO S30 look like the classic SNES controller, and thats for good reason, because one of the members of 8BitDo, a company renowned for making wireless controllers actually had input when it comes to this handhelds design.

Hence, why they’ve named it after the 8BitDo SN30+ Controller.

We’re not entirely sure who created the PocketGo S30, it could be the guys behind the Bittboy seeing as they have named their consoles “Pocket Go” in the past, but as of now we have no idea.

How Does The PocketGo S30 Feel?

We’re still not entirely sure what to think of the PocketGo S30 design. We have a love hate relationship with it, but because of the small price tag we can’t be too strict with our opinions.

First of all, we love how this thing looks. It’s hands down the biggest selling point of the handheld. It looks nostalgic, has that “SNES” look to it, and the large 3.5″ display transforms it into an eye catching piece of technology.

The analogue stick is identical to that of the Nintendo Switch, which is much higher quality than the previous Bittboy products, and before you ask, no it doesn’t drift!

The DPAD works well and looks exactly like the one from the SNES controller. On the other side you have your action buttons which are actually quite small. We would have liked them to be slightly bigger, but then again, you’d lose a lot of room on the face of the handheld.

They could have also added the darker shade of purple to the A/B buttons just like the SNES controller, and even added the concaved X/Y buttons too for added detail, but they didn’t.

Below that is the start/select buttons which again, look like that of the SNES controller.

Moving onto the top, which is significantly thicker than the bottom of the handled you will find your triggers, a USB-C port, your on/off buttons and volume buttons.

The triggers are unique, the back two are flared and instead of being pressed down, you kind of have to push them back. We like them a lot but we can imagine many gamers will not, we’ll get onto why shortly.

At the bottom of the device you have two LED indicators, a headphone jack and a SD card slot. We appreciate having the headphone jack at the bottom because it doesn’t tangle your cables, so its good to see that haven’t copied some of the poorer handhelds with this feature.

On the back there’s very minimal featured, just a sticker.

When we did the “shake test” a test where we simply shake the handheld in order to hear how loose the internals are we were devastated. It sounds like the battery is about to come loose any second. While we shook the PocketGo S30 around all we could hear was the battery hitting each side of the retainer… not good.

This will most likely not affect the handheld, but this doesn’t give us confidence should we ever accidentally drop it.

Why Is It So Uncomfortable?

Unfortuantely, we find the PocketGo S30 to be fairly uncomfortable for long gaming sessions. Don’t get us wrong the design is stunning and looks very appealing but when you place it in your hand, it almost dissapears.

Our fingers rest far beyond the triggers to a point where it actually rests on the on/off button and the volume buttons. It’s not that our hands are big, its just the way the layout contradicts an adults hand.

To play effectively, we have to balance the PocketGO S30 in our fingers, instead of holding it with our hands. The images should give you an idea of what we mean.

For children, or those with smaller hands you’ll be fine but it just feels uncomfortable to play on at times, and it feels as if the handheld should never be fully palmed.

This was disappointing for us as the handheld was ticking so many boxes, but holding it just feels awkward and not right.

The following consoles are what the PocketGo S30 can emulate. To see gameplay, watch the video at the top of this article to get an idea of performance and a look out our “Dodo Rating”.

The PocketGo S30 isn’t the most powerful handheld on the market but for $59, you’re getting some nice specs. The 1.2GHZ Quad Core cpu can handle a lot that we’ve chucked at it.

For example, it can play your best PS1 games with ease, Gameboy Advance looks stunning on it and yes, it can even play the best SNES games to fit the style.

Everything is ready to go straight out of the box, menus are ready, about 100+ games are preinstalled (which they should’t be doing) and the buttons are all mapped for each emulator, meaning you rarely have to change the settings.

Unfortunately due to the 512MB of RAM it struggles to play 3D games from the bigger consoles, such as the Dreamcast and the PSP. N64 isn’t even installed on here because there’s just no chance of it working.

You can play a very small handful of 2D Dreamcast games, but it’s not the best quality experience you can get, heck if anything its terrible, so we’re writing Dreamcast emulation off the list.

When playing with the PocketGo S30 for a few days during lockdown 3.0 here in the UK, we noticed an intriguin problem with the emulation.

It’s as if every emulator hasn’t been configured correctly and the pixels look muddy, washed out and just a bit rounded, meaning you lose the strong saturation and sharp pixels that you want from a retro game.

We compared it to other handhelds and we were right, it has this muddy look to it. We’re not sure if thats the display used, which in all honesty is unlikely or if it comes down to how the emulators are configured to the handheld.

Perhaps down the line someone can fix this, but as of now, straight out of the box the screen is a little washed. And not just that, the viewing angles are pretty bad too, this is because the screen doesn’t sit on the display, it has a very tiny gap between them.

Look, yes, it has a number of flaws, but that’s to be expected from a $60 handheld who’s trying to compete with the $100 big dogs. The smaller chip stops that competition though, because it can only emulate up to PS1.

However, we still absolutely love it, it’s a great looking handheld, with a large screen, 5 hours of battery life and it’s easy to play with straight out of the box. This is one we can highly recommend to new-comers in the retro handheld scene, because its so easy to use.

If anything, it’s probably our favourite retro handheld under $60 as of now and it’s creating a new category for retro gamers who want a new pocket handheld. The average handheld that has came out of China in the last 6 months costs round about $100, and that’s not what a lot of people can afford, espcially during a time like this.

So it’s good to see companies trying to launch handhelds for those that want something cheaper that can emulate some of the smaller and older retro games consoles.