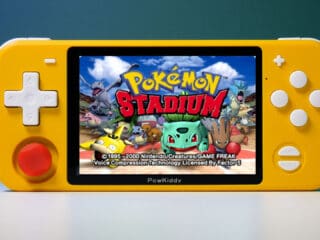 The Powkiddy RGB10 is a new retro handheld to come out of China that’s powered by RockChip’s RK3326 processor. This chip gives it enough power to emulate N64, PSP and even Dreamcast games.

For those with a keen eye, you can tell it looks nearly identical to the Powkiddy Q90. It’s a very slim handheld and perfect for chucking in your pocket.

The Powkiddy RB10 is officially available on AliExpress starting at $79.99.

The only downfall with this handheld, is that as much as it’s being marketed as a N64 emulator, it lacks 6 face buttons in order to play them efficiently, and it only comes with one analogue stick.

There’s ways around it when playing the best N64 games, but it’s not going to be easy.

From the specifications you can tell it’s somewhat a clone of the ODROID Go Advance, but with far better build quality, even if it does use a cheap plastic shell.

Nonetheless it has a very powerful processor inside which will undoubtedly be able to play your best Dreamcast games with ease. It’s targeting those who want portability, and pocket power.

Unfortunately it lacks dual analogue sticks and 6 face buttons, but for those that don’t mind remapping some keys, N64 plays fluidly, if you don’t mind getting using the claw formation.

Not so good. Powkiddy is renowned for their average build quality, and the RGB10 follows that. The plastic shell they have used alongside the cheap analogue stick makes this review score a considerable amount lower than we’d like.

The ABXY buttons are small, the lack of volume buttons annoys us and the reset button being so close to the sleep button has caused us to lose hours of gameplay.

But it’s not all bad. The 3.5″ IPS display is very nice, and the viewing angles are superb. The shoulder buttons are stealthy, and barely sit out of the shell.

We like that they added a small bezel around the screen, all while keeping the logo somewhat hidden too. And they haven’t added any text to the back, making it look more official than their previous handhelds.

The main feature we like about the Powkiddy RGB10 visually, is the slim design. It’s the perfect Pocket N64 handheld. Nothing sticks out, it’s small, and the battery life lasts a good 4 hours before needing charge, making it a great companion when travelling.

But, you can still see that Powkiddy has cut corners, especially when it comes to build quality. It’s obvious they want to cut costs, but this doesn’t reflectin the retail pricing, if anything the Powkiddy RGB10 should be $60, not $80.

What Can The Powkiddy RGB10 Emulate?

Above is the list that they advertise it can play. It’s mostly true, large Dreamcast games do sometimes struggle.

Nintendo DS though, is pushing the boundaries of this chip, and with only one screen you’ll have to switch between analogue stick and the “mouse” setting, which is infuriating on a handheld of this size. So we’re saying it doesn’t play DS games, if you want something that does, get a DS.

Putting Nintendo DS emulating on these devices is (in our opinion) a bit useless. Yes, you can play DS games but you won’t be enjoying them to their full capacity. But even then, we think most 3D Nintendo DS games will struggle on this chip.

The Powkiddy RGB10 is for someone who doesn’t want to faff around with emulator settings, downloading ROMs and installing new firmware.

Our Powkiddy RB10 came pre-loaded with thousands upon thousands of ROMs, making it the perfect out of the box N64 handheld we’ve reviewed.

Yes, it lacks a couple of buttons, but the Powkiddy RGB10 comes with Emulec installed and all the games you could think of ready to play with the press of the button.

When we first heard of the Powkiddy RGB10 we thought to ourselves “yep, another terrible Powkiddy product”, but it seems they’ve marketed this handheld for the new retro handheld community members, and we kinda like that.

It’s a well rounded handheld, the UI is easy to use, even children could understand it. That paired with a powerful chip makes it a really good little handheld for those wanting an introduction to the retro handheld world.

That’s why we rate it a 7/10, for it’s ease of use, and we reccomend it for anyone buying their first retro handheld. It really is pick up and play.

The only downfall is the price tag and average build quality, but that’s classic Powkiddy for you.

5 Best Toploaders for Trading Cards in 2022

5 Best Magic The Gathering Sleeves Of 2022