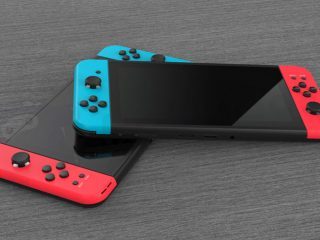 Close, but no cigar

The Powkiddy X2 is a large handheld games console out of China that replicates the look of the Nintendo Switch and has the same power as the failed Q400 handheld.

It won’t be making our best retro handhelds list but it’s certainly not the worst console we’ve seen from Powkiddy.

The Powkiddy X2 is aimed at those that want a larger handheld that can emulate your favourite PS1 games. That’s what they advertise it as anyway, but like any Powkiddy, it falls short of what they say it can do.

Specs wise, it’s not too bad, but for the $80 price range it is. The RK2020 is cheaper and features far more power. Heck, even the RG280M is cheaper with more power, and that thing is metal!

Because the handheld is larger than most out of China it has the capability of adding more battery space.

But this has to power the larger screen, so we were only getting around 4 – 5 hours battery life out of the Powkiddy X2.

What Can The Powkiddy X2 Emulate?

Now, don’t get your hopes up, as Powkiddy has a history of getting their facts wrong, and as much as it can play most of these consoles, some of them… not so well.

The Powkiddy X2 doesn’t actually feel too bad. I know, shocker right? It has an impressive slim form factor, making it thinner than a book, perfect for chucking in your bag.

The large 7” screen is nice to have when playing old school games, but we noticed you’re forced to play in a stretched aspect ratio unless you go deep into the settings which can get confusing.

The screen has average viewing angles and it’s bright enough to play on outdoors. It’s not crispy, just bright and colourful, in no way will the screen blow you away, but it is enjoyable to play on.

For obvious marketing reasons they’ve used Nintendo Switch colour scheme, and from a far we’ll be honest it does look like a Switch. It’s slightly taller than a Switch though, and the colours used are identical.

The analogue sticks are incredibly poor quality. The sticks actually spin around when you move your thumbs making it near impossible to get any grip when playing games.

We were continuously finding ourselves getting angry at it, controlling your character in game with a spinny stick is just annoying. This problem alone ruins the handheld.

If they simply made the sticks somewhat good quality, the console would actually be enjoyable to play on, but no. Powkiddy being Powkiddy, they went with the cheapest they could find.

The DPAD is identical to the ABXY buttons, and well, we’re not even sure if we can call it a DPAD, it’s just buttons with arrows on it. Disappointing. Below that is your start/select buttons.

On the other “joy con”… Sorry, we laughed typing that, you’ll find another bunch of controls with a reset button where the home button would be on your Nintendo Switch.

The speakers are very well placed, you have one at the bottom of each joy con, this is perfect as we never found ourselves blocking it.

On the top of the Powkiddy X2 you’ll find just two shoulder buttons, and not four which is now standard on any handheld throughout China. Next to that you have the ON/OFF button, volume rocker, TF card slot, mini HDMI out and your headphone jack.

The back of the device is plain black, and if anything it looks disgusting and out of place, especially with the Chinese text slapped on the bottom.

Under the handheld you have two micro USB ports for inserting two controllers should you want to treat this as a small home console. We’re not sure how many of you have Micro USB controllers, but we’re certain adding USB ports would have been much more useful.

In no way does the Powkiddy X2 scream premium, there’s plenty of flaws, and you can tell many corners have been cut to get this out of the factory. But there’s something that still feels nice about having such a large thin handheld.

And because it looks like a Nintendo Switch, many customers will want it just because of that one feature. Perhaps it makes a good gag gift, perhaps you want it for your collection, who knows.

But build quality wise, it’s still a classic low quality Chinese handheld, with nothing innovative about it, simply another handheld, placed into another shell with a bigger screen.

When we see a new handheld come out of China with 256MB of RAM we prepare ourselves for disappointment. Only a few companies can pull it off, and Powkiddy isn’t one of them.

With any review we jump in the deep end with emulation, so we loaded of the PS1 emulator and loaded up the classic that is Crash Bandicoot. Immediately we started hearing cracks and breaks in the audio… not a great start.

It loaded, we started playing and as much as we could play the game, and get through to the end of many levels, the gaming experience wasn’t pleasant.

There was plenty of screen tearing going on, the audio was continuously dipping and breaking, and frame rates were all over the place. If it can’t run Crash Bandicoot, it’s going to struggle with many other PS1 games.

Yes, it can run 2D PS1 games, and that’s how Powkiddy gets away with advertising that it can emulate PS1, because technically it can emulate one 2D game well. But the average PS1 game it cannot.

Moving down the list to smaller games consoles like the Gameboy, and Mega Drive it performed well, as it should with a quad core processor.

High saturated games like Sonic The Hedgehog and Pokemon it performed perfectly, and with the save state features, it can be an enjoyable handheld to play on when using the right ROM.

The large screen was quite nice, we’ll admit. It’s rare to see a 7” handheld come out of China, but we enjoyed the larger play style, even if the analogue sticks are like Bambi on ice.

The Powkiddy X2 is one of Powkiddy’s better handhelds, but it’s still bad in its own ways.

We’ll give credit to them because they’re one of the first Chinese companies to pump out a larger, more powerful handheld, but because they rushed it, much of the build quality and performance suffered in the process.

It looks great, the Nintendo colours look great, and the thinness makes it appealing, but it’s just another average handheld that will eventually get thrown under your bed for years to come.

It can emulate Gameboy, Mega Drive, Neo Geo and Famicom well, but so can a potato. The only reason you’d buy this is because it looks like a Switch, and it has a big screen, that’s it.

For $80 this is a rip off, and it would have been a much better review if they priced it towards the $40 mark. It’s pricing itself the same as a RG350M, and that’s just suicide.