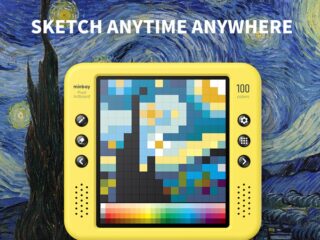 I recently had the pleasure of testing the Pixel Artboard from Minbay before its official release.

The Pixel Artboard is still currently in its Kickstarter cycle which should be ending in the next couple weeks.

So anybody looking to pick one up can back that campaign and get theirs shortly after its completion.

But what is the Pixel Artboard?

Well, as the name suggests… this new handheld device from Minbay (China) is a dedicated pixel art tablet to be used for retro style image creation.

Why Would You Want The Minbay Pixel Art Handheld?

So, why would you want a device like this when you can do the same thing with an app on your cellphone (as one Instagram follower impertinently asserted to me)?

Well, this is a device for people like me who enjoy cool handhelds and photographing them for social media posts.

People who carry Game Boys or one of the Best Handhelds Under $100 in their bag for both fashion and function.

Yes, you absolutely can do the same thing on your phone if that’s what you prefer.

But to me, that’s like saying “why play a Game Boy when you can play a Nintendo Switch?”.

Similar devices from Divoom, such as their Pixoo-64, are focused on displaying pixel art on a desktop or bookshelf and use a separate app to create images. That device sells for $149.99usd.

To me, it is not a matter of which is better or worse. It’s more about what you hope to do with it. They are just made for different uses.

What’s It For Then?

The Pixel Artboard is for people who want to play around with some pixels on a dedicated device without the endless distractions of a cell phone.

I really enjoy playing on my Pixel Artboard and recreating some of my favorite game characters from retro games as well as from my own game The Mayor of Sanctuary.

The limited palette of 100 colors means that your images will mostly have a retro vibe.

Admittedly, this color limit is also a bit frustrating at times, as it feels like it’s missing some important variations.

But clearly Minbay intended this to be a retro focused device, and the color choices will feel similar to the NES which only had 56 colors.

I have yet to use mine to create new images, but the Pixel Artboard is also intended for the purpose of creating new works of pixel art on the go.

Their (not so well translated) tagline is “The desire to paint must be satisfied anytime, anywhere”.

The Pixel Artboard can certainly fulfill that purpose.

Let’s take a look at what the Pixel Artboard has under the hood!

Touch sensitivity is not great, so you will often have to redo pixel placement. Not sure if this is due to the screen used or the software.

Inside is a 2000mAh battery with USB Type-C charging and computer connectivity.

It also contains a Bluetooth chip to connect to their app for image backup and to share your images on social media.

Oh, and it has stereo speakers for some reason. Not sure why, but it looks nice!

The OS has some cute sounds when you use it, making the experience a little more premium.

Their OS is clean, simple and intuitive.. but not the best performance. Don’t worry; I’ll go into more detail on that below.

How Did I Discover The Pixel Artboard?

I discovered the Pixel Artboard when it popped up on my Instagram feed as an ad, which lead to their Kickstarter campaign. It looked cool to me, so I clicked on the link.

After reading more and seeing more images, I was impressed. I nearly purchased one, and sent the link over to Brandon Dodo…

Coincidentally, Minbay had just reached out to us for an early review. So my timing was perfect.

Two weeks later and I have one in my hands!

I was entirely blown away by how beautiful this thing is when I removed it from the box. I thought it would be nice, but I wasn’t ready for how well built the Pixel Artboard is.

If you shake it you hear no rattling pieces. If you (gently) twist it it does not bend or crackle.

And I love that the rear of the device is slightly transparent, giving you a view of the really awesome work they have done on the internal hardware.

The one and only thing that was sort of a turn-off was that they used a sticker on the screen to show the color palette.

This seemed like an odd thing to do, since they could have easily had this be a part of the software (and it could zoom in on the colors as you swipe your finger around the palette).

They include a replacement sticker in the box as well, so I can only assume this sticker might get some damage after heavy use.

This is the one and only thing in the physical appearance of the device that was not a 10/10 for me.

Besides that, they did an incredible job with the design of the device and made a lot of great aesthetic choices.

My opinions about the Pixel Artboard only started to dip as I began actually using it.

I have experienced a lot of buggy performance in their software during my use over the past couple weeks.

I did contact Minbay about these experiences, and they sent over their latest OS (at the time of this article is 1.3.35), but this didn’t seem to improve any of my problems at all.

Minbay further indicated that the consumer fulfillment will include their latest firmware (whatever that may be at that time), and the ability to update the device means they can always improve its performance over time.

I just wish this was ironed out already.

How To Score The Minbay Pixel Art Handheld?

Because this is not a gaming device, we cannot necessarily use the same judging criteria here. And we don’t have a lot to compare it to.

I am basing my rating of this device based on build quality, appearance, usefulness, and performance.

I would give very high scores for both build quality and appearance.

The only slight on the device was the use of a sticker for the color selection at the bottom rather than it being a part of the software on screen.

But overall, the device is gorgeous and also photographs very well.

Usefulness is up for debate, as we previously saw people offering the alternative of just doing the same type of pixel art play on your phone. Valid point.

But as I also previously mentioned.. I like that the Pixel Artboard is a dedicated and distraction-free device.

We can also play Game Boy games on our phones using one of the Best Emulators For iPhone or Best Android Emulators.

But there’s something special about having a device in your hands with a single purpose.

Perhaps the most disappointing aspect of the Pixel Artboard and the weak link in a pretty solid chain is its performance.

I was really looking forward to playing on this thing and recreating some of my favorite pixel art characters.

But it didn’t take long for me to start experiencing some buggy performance.

I don’t know if it is the software or the hardware to blame, but I am assuming it is a software issue.

If you look at the beautiful hardware that Minbay has created and take into account the simple task that it has to perform… it seems like there should be no issues with the hardware being able to handle it.

I did update my OS firmware and it did not help with any of the issues I experienced; I actually saw zero difference from that update.

What Issues Did I Experience?

So what software issues did I experience during my short use of the Pixel Artboard?

Well, first… my device would not save my images when I started using it. I couldn’t figure out for the life of me what was going on.

You should be able to simply exit out of the image to save it. But mine would not save.

So, I did a factory reset of the entire device. This emptied out the sample images, but also fixed my saving issue.

The next issue was that I had my device freeze. Like, often.

There were a couple of other things, like the undo button often jumping back to early stages of my images rather than the previous input.

Sometimes I would lose 10-15 minutes of work in a single click without any way to go back.

But my biggest complaint about the performance of the Pixel Artboard is the screen responsiveness.

Again, I do not know if this is a software issue or the choice of screen. But I have had a frustrating time pressing my screen and trying to get it to read my pixel input.

Overall, we shouldn’t have these kinds of small bugs happening on a device that is presumably capable of handling this simple task.

Again… Minbay has expressed that they are still working on the OS, and will provide updates in the future.

I just hope that consumers get a solid firmware build so that they do not experience any disappointments with the Pixel Artboard, cause I really want this thing to be a winner.

Software frustrations aside, I still love this thing. A lot.

And maybe that is easy for me to say because I didn’t pay the $109usd pricetag for it.

I guess if I had dished out the same amount that could have been spent on something like the RG351V, I’d be pretty annoyed to have performance problems.

So, the main saving grace here is the appearance of the Pixel Artboard and how great it looks next to a latte at the coffee shop or along side some of my favorite retro handheld consoles.

Future software updates can absolutely save this thing.

But if my experience is the same as what consumers will have… people will be blown away by how beautiful it is, and then immediately disappointed by software flaws.

Fingers crossed that Minbay has the software fixed for the consumer release, making this an awesome handheld pixel art tablet for fans of social media posting and cool dedicated devices to collect.

Don’t forget to check out the official Minbay Pixel Art Kickstarter page for more info and to grab on of your own!