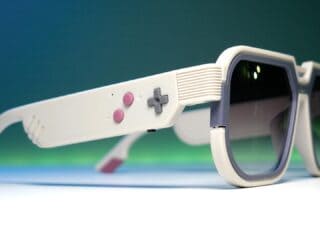 Have you ever wondered what would happen if Nintendo released Gameboy Glasses for retro gamers? No, me neither, but the geeks over at Mutrics, have invented just that and we love it.

No they can’t play your best Gameboy Color games, but they can reduce eye strain, and connect to your smartphone to play audio through the built-in speakers at the back.

Mutrics have created the world’s first ever smart glasses for video gamers. They call them the GB-30’s, and they’re targeted at gamers who want to relieve eye strain all while keeping notifications and phone calls directly on their head.

The design alone caught our attention when surfing through Instagram, they have a multitude of variants but grey DMG variant caught our eyes, for obvious reasons.

When we started to unbox the Gameboy glasses we were very impressed the packaging and the general unboxing experience.

The instruction manual was designed like the original Gameboy, the glasses box was made of fake leather and had magnetic strips to keep the premium carrying case closed.

Not only that, inside you received two extra lenses to choose from, one slightly polarised, and one with a blue tint to it.

You also received a charging cable which magnetically connects to the side of the Gameboy Glasses, a microfibre cloth and a carrying pouch to keep them clean.

Overall the packaging was superb, and it added value to the Gameboy Glasses, and that’s what you want from a pair of sunglasses that cost over $100.

How Do They Look?

Mutrics have gone for that old school Aviator look, the lenses are big, round, uniquely shaped and are easy to pop out should you want to change them. Push them out, and snap them back in, it’s that easy.

The layer around the lenses are a dark teal colour, the same as the GAMEBOY font on the original DMG, around that is then the classic grey that we all know and love. This follows it to the back of the glasses, with a touch of burgundy at the back, to pay homeage to the classic A/B buttons.

On one side you have the “GB-30” logo with a targeted speaker at the back that locates itself just above the ear. On the other side, you are greeted with what looks like a Gameboy Mini, ready to play with on the go.

These buttons do a few things, the +/- buttons are for volume up and down (single press) and for next and previous song (hold).

The DP-AD is for music and calling. It’s only one button too, making it directional would be too much for my fat fingers, so it’s nice that they didn’t overcomplicate it.

Double click the D-PAD to activate Siri, or Google Assistant, and a single press will play or pause your music. When someone calls you, single tap to answer and double tap to reject.

The lenses themselves have anti-blue reduction technology inside of them. Blue light is omitted from LED lights, computers, TVs and a bunch of other electronics. While they’re not harmful in small doses, doctors are worried that it causes an over exposure effect on the eyes that causes strain and stress.

The lenses stop 90% of this blue light from entering your eyes, relieving stress and potential eye problems in the future.

On the side of the Gameboy Glasses, you will see the small speaker, these will connect to your phone, or PC using Bluetooth 5.0 and has up to 20m of range.

On the bottom, below the DPAD you will also find your on/off switch, this will automatically connect to your device should you have set it up previously.

The Gameboy glasses are very light for smart glasses, you don’t really feel them on your head, and the large sides go unnoticed.

It is a plastic design so they’re not as durable as metal glasses, so make sure not to sit on them, or put them where they could get damaged. The plastic will snap, and when these snap, there’s no easy fix.

If you like to get sweaty when you’re playing games, do not fear, the plastic is IPS5 sweat resistant, meaning the plastic will not discolour, nor degrade.

The design is simple, yet effective, the plastic used isn’t the best of quality, but its mandatory when filled with this much technology. The look and feel is certainly retro, and the oversized lenses takes us back to the 90’s.

Pair these up with Super Mario 3D All Stars Shoes and you’ll be the coolest kid on the block.

The buttons are small, but easily accessible as there’s only 3, but getting used to what they do does take time, so make sure you give it a day or two to mess around with before knowing what does what.

Mutrics have plenty of colour combinations to pick from, so if the original DMG style doesn’t suit you, there’s something that will.

The Gameboy Glasses have built in speakers that are used for music and notifications, but we found that we mainly used them for phone calls, alarms and messages.

The speakers in each frame is tiny, and the audio quality output isn’t the best in all honesty. Yes, you can listen to music, but there’s little to no bass and the highs to mids are tangy, but that’s to be expected from such small speakers.

Never again will you miss that call, that Discord ping or that message from your partner to defrost the chicken.

Inside is a 90mah batter which lasted around about 3 hours on one charge, and charge time only takes about 30 minutes to full.

We would have liked a little longer, because some readers may have wanted to use these all day at work, but unfortunately you will need to charge it at lunch to get you through the day.

Overall we really like the Gameboy Glasses, primarily for the fact that they are incredibly geeky and look like Nintendo has made it themselves.

But also because of the blue light reduction and the fact that you can receive notifications and sounder alerts directly through the glasses themselves.

It’s not the smartest thing we’ve seen glasses do, but that’s to be expected from $159 glasses. These will not make you a cup of coffee, instead they’ll reduce strain on your eyes on the coolest way possible.

We would have liked to have seen slightly better audio quality, but we’re no technician and their is probably a reason why the speaker is what it is!