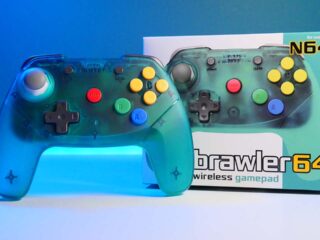 A must have accessory for your old N64

The Brawler64 Wireless controller is a great way to mix modern technology with retro games consoles, and who better to do it than Retro Fighters?

Retro Fighters have been creating gaming peripherals for retro consoles for some time now, but it isn’t until recently that they’ve really up’ed their game.

Their new flagship Brawler64 wireless controller landed on our desks and we couldn’t have been happier with the outcome. The original N64 controller is unique, and although its fun to use the layout is becoming some what outdated and awkward to use.

But now, there’s a wireless option with a modern touch but keeping the style of the classic Nintendo console allowing you to play the best N64 games.

How Does The Controller Feel?

The Brawler64 wireless controller has been built with comfortability in mind. Due to the structure RetroFighters has had to move some buttons and sticks around in order to make it fit the modern controller look.

The analogue stick has been moved to the left, instead of the center which feels natural and is by far the best place to locate it. If you’ve ever played with an N64 controller you’ll know that the original analogue stick has a lot of travel compared to traditional sticks. Retro Fighters has kept this distance but in our personal opinion we would have liked to see this removed.

The distance removes that “modern” feel, and adds a lot of thumb activity to the controller. This is simply a personal preference and we’re sure many of you will love the original travel feel. The Brawler64 wireless controller also has added grips to the top of the analogue stick which is a nice new feature. The stick does not click in.

Moving towards the middle you have the turbo button, the Retro Fighters logo and the clear button. Below that you will find the traditional big red start button which is centralised and adds that “N64” look to it. You press this to sync to your wireless receiver.

The DPAD is placed perfectly for large hands, our thumbs don’t feel stretched or cramped when moving from the stick to the DPAD. The DPAD itself sits very close to the buttons so there’s very little travel when pressing, this works well with fighting games but it has a lot less travel than your action buttons.

The action buttons and direction buttons on the right hand side have a lot more travel than the DPAD, the start button and the turbo/clear buttons. This isn’t a major problem but when you start playing for long periods of time your thumbs subconsciously press down lightly and at times miss the press.

Even the AB buttons have slightly less travel than the arrow buttons and this again causes some confusion at. This isn’t a major flaw, if anything minor but we had to mention it.

On the top you’ll find four shoulder buttons, yes four. You have the L & R buttons on the correct sides and then your two shoulder buttons at the back are the “Z” button instead of the single button on traditional N64 controllers.

This gives it that modern feel which Retro Fights have crafted so perfectly. These shoulder buttons feel great, are located perfectly and features nice bouncy feedback. There is again, some slight travel distance between L/R and Z but it’s unnoticeable to your average consumer.

On the back the memory pak has been removed, which may surprise you because on their original wired Brawler64 controllers it was on the back, but no, they’ve created a great little wireless receiver that also houses your memory paks, it’s a neat idea and it works well!

But with the lack of a memory pack in the controller rumble and transfer packs are unfortunately not compatible with the Brawler64 wireless controller.

The USB-C port is located in the middle too. What we like about the Brawler64 wireless controller is the fact that you have a nice range of colours to choose from. There’s red, blue, green and classic grey. The coloured variants have a transparent shell to it, giving a nod to the transparent N64 controllers.

We did notice that the plastic used is fairly light, and from previous comments we know a lot of you seem to like heavy controllers but we can assure you the weight of this controller adds character and lets you game for longer.

The wireless receiver is a cool update to the Brawler64, it sits inside of your N64’s controller port and allows for the controller to pick up a signal. But it also allows you to add your Memory Pak.

This is a great feature and we’re glad they didn’t stick to the original wired controllers layout because this removes the awkward size of the memory pak from the controller, allowing for more comfortability.

It puts very little stress on the port but we suggest keeping it away from being knocked by pets or little ones. These receivers also match the colour of your Brawler64 wireless controller.

Combine this with a decent N64 HDMI cable and you’ve got yourself the ultimate N64 setup!

It performs as should, syncing up wireless is as easy as pressing the start button, the memory pak works as it should and all round its just a nice, easy experience from the second you open the box to when you plug it in.

You may need to charge the controller beforehand, but that’s normal. We get about 8 hours of gameplay from a full charge which is beyond what we expected.

Refresh rates are quick, the buttons are responsive and we no connectivity issues at all, only when you are starting to get very low battery will you then notice some very slight lag1

It does what it’s meant to do, and it does that well, in a slim modern way.

Overall we really like what Retro Fighters have done with the Brawler64 wireless controller. It’s an affordable, modern kick to your old N64 console and it comes with superb button layout, great comfortability and reasonable battery life.

The transparent colours are stunning and it gives that much needed nostalgic touch to the controller. The trigger layout works well, the response is bang on and the addition of the memory pak receiver was much needed, if even it does remove some classic features.

The only real flaws simply come down to personal preference. It has the light plastic feel which some of you might not like and the inconsistent travel between buttons gets a little annoying, but apart from that this is an all round great controller.

We also respect where Retro Fighters has price it, coming in at just $39.99 this makes it hard for future competitors to come into the scene.

A well finished, modern touch to a nostalgic console that we can’t put down.