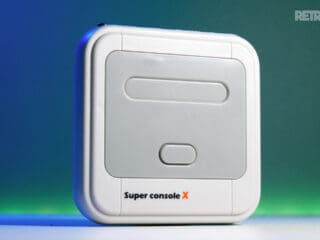 The world of retro gaming is forever changing, and China’s release of the Super Console X proves that a demand for cheap, high performing “naughty” consoles is on the rise.

The Super Console X is an affordable, retro games console that can emulate a majority of your favourite retro video games.

Many readers may look down at some of the products coming out of China, but we can assure you like many of their best retro handhelds, these retro games consoles are getting better and better.

The Super Console X is several months old, but what got us interested is the new, cheaper price. Originally it retailed for $119, but we managed to find it for $48, and well… it’s worth every penny.

What makes the Super Console X is the plug and play nature of it. It comes with thousands of pre-loaded games, easy menus and our favourite part? All of the buttons are correctly mapped, meaning you simply turn it on, choose your game and you can play without having to change anything!

PLEASE NOTE – This article is purely for educational, scientific, and knowledge-enhancing
purposes only and should be treated in the same way as a highly exciting thesis or dissertation. Retro Dodo does not condone illegal downloading or any other shady activities that might get anyone (namely us) into trouble. Please check the legality of ROM downloading in your area and always follow government guidelines on internet safety and copyright laws.

Like any product from AliExpress, the packaging is honestly nothing special. In the box you get the console itself, two wireless controllers, your power adapter and a HDMI cable.

Before we go anywhere, we have to talk about the controllers, they are awful. It’s like something you would find in a cereal box. It’s cheap, thin plastic, with awful loose buttons, and it requires x2 AAA batteries that do not come included.

Watch your thumb when you open up the back compartment as its as sharp as Bilbo’s sword!

How Does The Console Look/Feel?

Again, like crap. The build quality of the console itself is nothing special. They have designed it to look like a SNES Mini, which fair enough, may look appealing to some but when you hold it yourself, it feels like thin air. The shell also feels as if it could be snapped with a slight breeze from the bottom end.

The SNES features on the front do nothing, like the “cartridge slot” and front button. The only button on the Super Console X is in fact on the back, and that’s for turning it on and off.

While we’re on the back, you can see the ports. It has a AV out, ethernet port, DC in, and your HDMI port for plugging it into your TV or monitor.

On the adjacent right hand side, you will also find your SD card slot and two USB ports for adding controllers.

On the back you will find small grips to keep your console from slipping off of your desk. You will also notice a lot of ventiliation too. We did notice the Super Console X has a tendancy to get warm, but not warm enough to cause any worry.

We have not had any experience of it overheating, so although the case looks like it doesn’t help with airflow, we can assure you it hasn’t caused us any issues as of yet.

You can upgrade your purchase to SNES controllers which just so happens to be cabled, and these are probably better than the fake Playstation controllers that we ended up with.

Overall, the aesthetic, and overall build quality of the Super Console X is a little depressing, no design, or ounce of creativity has been poured into it. But, what can you expect from such a cheap device?

Don’t forget that you can change out the controllers for your own, which we highly advise doing.

The Super Console X is running on EMUELEC, a very reliable, easy to use piece of software that houses your retro games in a clean library ready for you to start gaming out of the box.

Because the Super Console X comes preloaded with thousands of games, once you jump into the menus you will see everything listed for you.

What we love about this is that, not only are the games listed in alphabetical order, but each game has box art, screenshots and information about the game itself like the release date, publisher and genre.

The Super Console X has a lot of settings too, allowing you to save/load games, map keys, change resolution, add box art, change borders and more. It’s an all round easy to navigate menu, with a bunch of detailed settings for you to test.

How Does The Super Console X Perform?

The Super Console X is a $50 retro games console that can emulate everything up to your best Dreamcast games, very well. It’s no next-gen console, it’s not going to power your Gamecube games and its not going to let you “Netflix and Chill”.

This is a cheap, pick up and play home console for retro gamers wanting something new for their living room or office, and in no way will it compete with any major consoles out there.

It’s a spontaneous purchase, but nonetheless a great one.

So, how does it perform? The quad core processor and 1GB of RAM sounds a bit… basic right? Well, that’s exactly our thoughts, even the RG351M and the Retroid Pocket 2 are technically more powerful than it.

But, thats exactly why it impressed us, these specs on paper are nothing shy of normal, but its performance was not… so normal.

We predicted that the smaller consoles such as Gameboy, SNES, Gameboy Advance, NES and Wonderswan would all work fine, and it did.

Each emulator has a cool border around it to let you know what you’re playing and to keep the games in its normal aspect ratio. You can change this if need be.

Frame rates on these smaller games were absolutely fine, there were no problems with freezing at all, nothing. Moving on to the bigger consoles like PS1, Nintendo 64 and PSP worked well too!

Frame rates were high and there was only the odd 1 second sound drop every 15 minutes or so while playing our best N64 games, but you would have to concentrate a lot to hear it as we subconsciously blocked it out after an hour or so.

We were also very impressed with Nintendo DS, it worked incredibly well and it was easy to navigate around the screen using the analogue sticks instead of the DPAD.

We did however need to map some keys to play our best Nintendo DS games, but that was easy and literally took 30 seconds to do so. This can be done mid game.

However we did notice some frame rate drops on large Dreamcast games, but not enough to harm the gaming experience. It was still playable, but not silky smooth like PS1, N64 and others.

It was surprising to see such a small little console with very little RAM play the likes of some big Dreamcast games fairly well, and that’s why we love it.

Overall the gaming performance was great, but it narrows its target audience to those that want everything up to Dreamcast, beyond that you will need something else.

Overall, the Super Console X is a nice little surprise, a gift worth giving shall we say. We’re not sure why the original price was so high at $119, and even then we noticed that some YouTubers highly recommended it at that price! Let alone $50.

And that’s why we just had to review it, the price drop mixed with the potential made it a product we just had to get in. The gameplay is great, you’ll rarely have any problems with it playing anything under Dreamcast. And for Dreamcast itself, it’s still fairly good when it comes to emulation.

However, the build quality, and the awful controller is what brings our end rating down. We can let it slide a little due to the $50 price tag, but we would have liked something a bit more aesthetically pleasing.

Perhaps a new design, a higher quality plastic, and some nice LEDs? And for those controllers, scrap them, we wouldn’t even wipe our arse with them!

This is a worthy pick up, you can’t go wrong with the competitive price, and if you can put the build quality aside, we promise that you’ll fall in love with the UI and the gaming experience in no time.

Could this be the start of affordable retro games consoles coming out of China? Let’s hope, but remember, setting this up can be a bit tricky, and getting good quality ROMs already installed is a chance game.