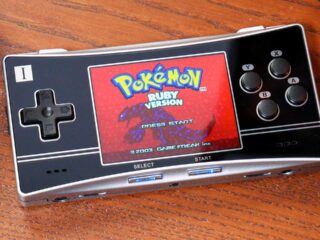 A very average handheld, which is unlike ANBERNIC

The RG300X is ANBERNIC’s latest handheld, one that quite obviously resembles the Gameboy Micro from 2005 and although it looks pretty cool, for some odd reason it doesn’t feel like an ANBERNIC product.

First let’s talk about the design of the RG 300X. It’s much bigger than a Gameboy Micro, in fact it’s far closer to the RG351P, which is one of ANBERNIC’s best handhelds.

The display comes in at 3” and although it looks okay in broad daylight and sits very close to the screen which I like, it’s nothing special.

This might be because I’m so used to using bigger screens nowadays, but a 3” display on a handheld that’s this big, just doesn’t feel right.

On the face you will find your four action buttons which have a cheap plastic feel, a decent DPAD which can be easily used for fighting games, two speaker grills on either side which do in fact get in the way of your hands and the signature start select buttons from the Gameboy Micro which have bright LEDs behind them to indicate battery status.

Looks wise, it isn’t too bad, if you’re a fan of this Micro design then you’ll love it but I personally feel like this Famicom look has been overused and gives off a low quality vibe.

Heck, just 2 weeks ago Powkiddy launched the Powkiddy Q20 Mini which looked the same. It’s like everyone in China is losing innovation and are just chucking out the same things over and over again with little time spent on design.

Moving around the RG300X, on top you have some very shiny shoulder buttons which feel great, they sit closely to the buttons which allow for quick pressing, and are nicely placed for large hands. Between them you have two USB-C ports and a Mini HDMI Out.

This is actually a nice feature because many of these retro handhelds are starting to lose the HDMI Slot, so having this could be a reason some of you pick it up for playing on your TV.

Your power button is found on the right, your volume buttons on the left, then your TF card slots, reset button and headphone jack on the bottom.

Then on the back you will see the high gloss shell that houses your device. The deep red looks good but just be aware that this RG300X is an absolute fingerprint magnet.

There’s also a lot of text on the back, which I know a lot of you aren’t a fan of.

Ergonomics wise I found the RG300X to be quite pocket friendly, due to the lack of the analogue stick and the high gloss shell, this thing just slides into your pocket without any hesitation. Do remember that this is a fairly large device, but out of all of ANBERNIC’s handhelds this has to be one of their most portable.

In the hand it’s somewhat comfortable, due to the sharp corners I found my fingers don’t rest as comfortably compared to their older handhelds, but that’s because they wanted to keep that Micro look, which obviously comes with some disadvantages.

I could still play for hours without it feeling too uncomfortable, it’s just your index fingers that might feel the strain.

What Can The RG300X Emulate?

ANBERNIC have stated that it can emulate the following games consoles:

Moving over to the performance of the RG300X we don’t have a lot to say about it apart from the RG300X taking steps back instead of forward, which is very unlike ANBERNIC.

This device is using an old 1GHZ dual core JZ4770 chip which we saw in handhelds over two years ago, so it’s as if ANBERNIC are wanting to use up all of their old chips while they can, and that alone is what makes the RG300X slightly disappointing.

The firmware is also pretty basic, with a user interface that’s outdated, bland and certainly not fit for a $90 handheld.

Yes it can emulate PS1 but poorly. It emulates your best Gameboy Advance games well, SNES, Mega Drive and so on, but so can a handheld for half the price that came out in 2018.

I held ANERBNIC on such a high pedestal for so long, and this release really did surprise me. From a business perspective I get it, but because it’s such an average handheld, it really has brought down my overall opinions of the company in terms of quality.

But then i think to myself, what did i expect from the chinese handheld market, they’ll try and grab any penny they can, and use a Famicom design in hopes to make a few extra bucks.

An average handheld should not be priced at $90 in 2021, especially when the RG351P one of my favourite handhelds is priced just $8 extra and that comes with a bigger screen, more power, an analogue stick and a far better design.

Honestly, I’m just confused at who this handheld is aimed at. For now all I can think of is those who love the Famicom handheld look and cash to burn.

For those of you that do like it, the emulation is great up to PS1. Due to it being only dual core there’s no chance of getting Dreamcast or DS emulation out of this, but the older consoles perform perfectly with little hiccups.

Overall, I find the RG300X to be an overpriced average handheld with a very niche target audience in mind.

This is a handheld to skip for sure.