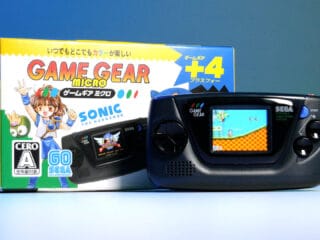 The Game Gear Micro is aimed at collectors, and not those who want the best retro handhelds to play games for long periods of time.

With the possible leak of the new Sonic game, SEGA has really been in the spotlight recently and the Game Gear Micro is one that the average gamer has skipped past, for good reason.

It’s expensive, that’s why. The Game Gear Micro comes in at $50, has a 1″ screen and can only play 4 games. Why would people buy this?

Well it’s simple. It’s not aimed for us Western folk. The micro toy culture in Japan is HUGE. SEGA has seen this and have given them something to collect. Not only will it last long due to its superb build quality, but you can also play on it too, making the Japanese fans booming with excitement.

If you are buying this to actually play games on, then you will be highly disappointed, we recommend buying a Retroid Pocket 2 instead for a bit more money.

The visuals themselves look near identical to the real Game Gear. We were astonished at how good this thing actually looks in the hand.

The materials used are very high quality, the addition of the batteries adds a nice weight to it and the screen itself is bright, crisp and colourful.

Yes, the screen is only 1″ big, and we struggled to read some of the smaller text, but some of the best SEGA Game Gear games are obvious to play, like Sonic The Hedgehog and Outrun.

The DPAD and the 1, 2 buttons have been increased in size and sit high out of the shell. This helps with comfortability and game play performance. This was a must have feature, if SEGA skipped past this, it would be unplayable.

On the top of the Game Gear Micro you will find a volume wheel, a headphone jack, a Micro USB for charging and the original red on/off switch.

The speaker is on the front and we were very impressed with how loud this speaker gets for its size. The quality of it too is beyond what we were expecting from this little pocket handheld.

Fluidly. The Game Gear Micro only has four games to play, so not much can really go wrong. The screen is tiny, sometimes its hard to understand whats going on, but the games chosen are not hard to understand, making your subconscious do all the concentrating.

If you hold START you get access to the settings. Here you can save/load up to 4 states per game, change brightness and exit to the main menu.

This menu is incredibly easy to understand, and makes the whole experience much easier to manoeuvre.

When you load up the Game Gear Micro, it takes around 10 seconds to load up the main menu. Here you will be greeted with a main menu that shows off the four games. You can either view the front art work, or press 1 to view the side. This is harder to see, but a nice addition.

When you want to play a game, press start, you will then recieve a description about the game (in Japanese of course) and then you press start again to play. Load times are near instant here.

The DPAD is easy to use, due to the increase in size. The buttons have a soft touch, so don’t expect any click response from them, that’s including the 1 and 2 buttons.

On occasion we did accidentally press the START button because the 2 button sits so close to it, but that was bound to happen with a device of this size.

Gameplay was fluid, no hiccups, no frame rate drops and no audio cracking. This is to be expected as SEGA own the ROMs, and will undoubtedly have performance at the top of their mind when launching this product.

The only problem we had with the Game Gear Micro is that small text was incredibly hard to see at times, especially when playing Royal Stone. Perhaps we should have bought the $200+ bundle that comes with the Big Window?

This is aimed at the Japanese market, not Europe or USA. SEGA doesn’t care about our opinions, as these things sold like lightning in Japan.

It’s fun, quirky, pleasing to play on, and it sits high in our SEGA collection. Would we buy another one for $50, no. In all honesty, at first you thinkn “wow this is cool” then you put it on show to never touch again, but we don’t mind that.

We knew that before we purchase, and we knew that after. We only advise picking one up, if you are true SEGA collector. If not, you will most likely be disappointed.

The new Limited Edition Game Gear Micro was also revealed shortly after showcasing a colour design and selection of games. This one will most likely be very hard to get hold of.

If you are into micro handhelds then we suggest looking at the Funkey S or the Pocket Sprite, both are cute little handhelds that can do so much more than the Game Gear Micro review.