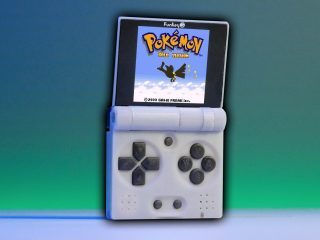 The Funkey S is a new retro handheld being released towards the end of 2020. Lucky for us we have managed to get our hands on the first prototype, making this an exclusive Retro Dodo hands on!

Before we start our review we’d like to mention again that this is a prototype and the Funkey team have informed us that this will not be the final product. In fact they have told us about many changes that they will be doing to the Funkey S before launch, so please, take this review with a grain of salt as we are reviewing the prototype, not the final product.

The FunKey is a retro handheld running RetroFe, this is a bit of software which allows you to manage and play all of your old school ROMs. What makes the Funkey S different to some of the best retro handhelds is that fact that it’s tiny, and has a clamshell aesthetic, just like the Gameboy Advance SP.

What Games Can The Funkey S Emulate?

How Does The Funkey S Feel?

The Funkey S prototype is made from a 3D printed plastic, but the final version will be made with an injection mould, making it more durable and a lot neater around the edges.

However the plastic used on the prototype still feels great, it’s protecting the important parts, it’s solid, and the whole handheld feels sturdy enough for it to withstand drops, and scuffs without a problem.

It even has the classic “snap” noise when you shut your Gameboy Advance SP or Nintendo DS, which we haven’t heard in a new handheld for some time.

Let’s get this straight before we dive a little deeper. This handheld is not for everyone, it’s a dang small handheld and one we don’t advise playing on for long periods of time. But as you know, that’s not why you buy this handheld.

The Funkey S is aimed at those that want something different, a iddy biddy handheld, that’s cute, works incredibly well, fits on your keyring and is one of the best possible gifts you could get a retro gamer.

Not only would you have one of the coolest modded Gameboys on the block, but you’d also be supporting a small team of builders who have built this by hand.

Moving on, the DPAD and ABXY buttons work well too, they’re easy to press, and come with a clicky response. Below that is a START/SELECT button and at the top a MENU button that gives you access to options. The shoulder buttons are also easily accessible, but there’s only 2, not 4 which some PS1 games need.

On the side, a Micro USB adapter for charging. We would have liked to see a USB C port because, let’s face it that’s the normal now, and a Micro USB is a step in the wrong direction.

And finally, don’t forget about the 1.5″ 240×240 display. It’s one of the most impressive features of the Funkey S! It’s crispy, incredibly bright, and has a deep mix of saturated colours that makes the screen “pop” playing games like Pokemon and Sonic.

There’s also an attached lanyard for those of you that want to attach it to your keys and an LED light at the bottom which will let you know when your battery is low, or charging.

The Funkey S runs on a ARM Cortex-A7 1.2 GHz processor and it can run PS1 games fairly well. In the prototype there is noticeable screen tearing but the Funkey team has informed us that this will be fixed in final production as the screens used will be different.

We tested all of the possible emulators, and a wide selection of games. Emulators such as Game Gear, Gameboy, Gameboy Advance and SNES run perfectly. No frame rate drops, no crashes, just a breeze. It’s the perfect handheld for playing your best Gameboy Color games!

It’s once we started pushing the boundaries and playing larger Playstation 1 games that we noticed a slight drop in frame rates now and then, but even when playing Crash Kart Racing and other PS1 games it performed better than expected.

The small 600MAH battery doesn’t last long, you’ll get about 1.5 – 2 hours game time depending on your brightness settings. This is exactly why we can’t compare it with other handhelds in this price range. It’s a luxury handheld, not one you can spend hours playing in one sitting. But that’s kind of why we love it.

The buttons are quite small, but we rarely found ourselves hitting more than one at a time. Our fingers rest easy on the shoulder buttons but after 45 minutes you do notice your hands starting to cramp or strain.

For us this is very much a handheld you pick up and play when you’re on your travels, perhaps a short bus ride, or waiting for a friend to get ready. It’s perfect for those situations, and the clamshell design fits this product perfectly.

In no way is this a comfortable handheld, but fun nonetheless!

Overall the Funkey S is an adorable, and surprisingly powerful handheld. Playing your old classic Playstation 1 games is possible, should you not be worried about playing on a 1.5″ screen that is!

The Funkey Project should be incredibly proud of what they have accomplished, even the company behind the Pocket Sprite didn’t do it to this standard, and this is the prototype!

It’s a wonderful handheld that has a seat in our handheld collection. It’s one we can chuck in our pocket to enjoy throughout the day, it may not be the most comfortable, nor the one to pick uo for long play sessions, but it’s the one that people talk about when you’re playing with it.

We have been informed that the Funkey S will retail for $60-$70, with the chance of getting it cheaper should you be on of the first to back it on Kickstarter.

Different. Clamshell. Adorable. WE LOVE IT.