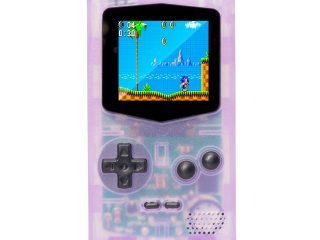 The micro sized metal gameboy known as the Pocket Sprite was a smash hit when it was first revealed on Kickstarter a couple of years back, and we were one of those who absolutely adored it!

But it wasn’t until now that we felt like we wanted to write about it.

We know, delayed is an under statement for this review but we’ve stepped back, and watched to see if the company will do any new versions, amendments and perhaps even new products?

This Pocket Sprite review might annoy some of you readers, and we apologise for that, but it’s a product that we couldn’t stay quiet about because we have some very strong opinions about it, as you can probably tell from the score we gave it!

So, here goes our review of the miniature keychain Gameboy named the Pocket Sprite.

Hands down the Pocket Sprite is one of the most adorable handheld consoles of all time. It’s diddy size and nature gives it a cute aesthetic that you just can’t help loving. But the cuteness is its biggest problem. We’ll get to why shortly.

The Pocket Sprite is made from a sturdy plastic with a matte finish, they do have other versions such as transparent, and a slightly more expensive metal version which actually looks quite nice. The buttons are clicky, and very, very small, so is the screen, coming in at 25mm.

Below the buttons you have a small speaker grill, that resembles the old classic Gameboy. Towards the bottom you have a Micro USB port which allows you to charge the device, and trust us you only need about 60 minutes or less to fully charge this thing!

Then on the back you have some Pocket Sprite branding, all in all, it’s a very basic looking shell, nothing crazy.

Let’s talk about the Pocket Sprite’s biggest problem. The size. Yes, its biggest selling point is how tiny it is, but that’s also why we can’t actually use it.

It’s so incredibly small that its uncomfortable to hold, and the iddy buttons and tiny screen make it a struggle to enjoy playing on it.

You can use your finger tips to play, but you’ll find you’re pressing more than one buttons at the same time, so we found ourself literally ‘nailing’ the buttons a lot.

Moving onto the screen, we’ll admit, it packs a punch, You can see what you’re doing, the colour is extremely saturated and it has got a nice brightness to it, which was unexpected.

But again, it’s very small, and it has this weird green hue to it that we can’t quite explain. We think because the screen is so small it’s hard to output a lot of quality causing a weird coloration on every game.

You can see most of what you re doing, but some games for example Pokemon, it’s hard to read some of the text, there’s just not enough pixels in this thing, and that’s not to blame the company, its probably because nobody actually builds them this small with a resolution higher than 96 x 64.

We just found this screen and miniature buttons a struggle to play on, and that took away the initial enjoyment. It wasn’t even long until we got bored, we used it for an hour and then… it went in the drawer.

Okay, but how does it play?

The PocketSprite comes pre-loaded with two emulators, GNUBoy and SMS Plus, that allow you to play every single game on the following platforms:

These are two great emulators, and there’s enough of a punch on this thing to power them smoothly, we had no problems with it bugging out, frame rate drops or screen tearing, it was a nice fluid motion, but the low pixel screen made it a little jittery at times within some games.

As you can see on the list above their is no Gameboy Advance emulator in this thing, for us that’s a bit disappointing as the GBA has some of the best gameboy games ever.

One of the best things about the Pocket Sprite is the ability to install ROMS over Wi-Fi. Obviously a micro SD card is just way to big to place in this unit, so they’ve added 14MiB of storage allowing you to add 100 small ROMS, or about ten normal ROMS.

All you do is plug the Pocket Sprite into your PC or Mac, connect to it’s WiFi and drag and drop your ROMs onto the device. A very easy, and noob friendly way of installing your desired games.

We played a wide number of games, and we found the Sega Game Gear games were by far the most enjoyable. They packed in a lot of on screen motion and the colours really made the Pocket Sprite pop when playing.

They seemed more fluid that the other emulators, and the lack of the Gameboy Advance games, Sega Game Gear was the nearest we could get.

Overall, what’s your thoughts on the Pocket Sprite?

Overall the Pocket Sprite in all seriousness is not something we advise picking up. It’s not a bad product, don’t get us wrong! It’s a great gift, it’s nostalgic and it’s manufactured incredibly well.

It’s a product you use once, and then never use again, and for $70 that’s just an absurd price for a quick use product.

Yes, you can add it to your keychain, but be prepared for scratches, marks and dirt to cover your brand new Pocket Sprite.

It plays well, but you won’t enjoy it. It’s so small, it’s close to being unplayable. It sounds like we are ripping it apart, but that’s only because it’s not something we’ve used much.

We’ve had it for over a year, and have use it a handful of times for less than 10 minutes, and we think that explains it all.

But it is a well made product, with a great emulator inside thats perfect for anyone wanting a miniature working version of the OG Gameboy, but we can guarantee you this will be long forgotten after week one.