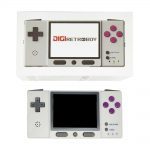 The Gameboy clone market is constantly growing, and although most are terrible “remakes” the DIGI Retroboy has shined through to become one of our favourite Gameboy Advance clones of all time.

It’s in no way perfect but it has a lot to offer for those nostalgic hunters out there that are seriously in love with Nintendo’s first advance handheld.

The DIGI Retroboy came out of nowhere at the beginning of 2019, with no real promotion, it just showed up on Amazon with no reviews.

We were hesitant to purchase as it’s not the cheapest handheld on the block, coming in at $80 which we can firmly say is slightly overpriced.

Before we purchased it we emailed the company, slid in their DM’s and attempted to get any reply back. We had no luck, it was a empty space which felt even more worrying for us to purchase. But we pulled the trigger, and 10 months on we’re still playing with it in our spare time. But why?

The DIGI Retroboy is a simple handheld, they’ve not gone over the top with too many buttons, they’re not wanting it to emulate N64 games which allows it to keep its small processor and minimalist design.

They’ve created it to emulate Gameboy ROMs and Famicom too. That’s technically wrong as it doesn’t emulate the games, it runs them natively through reverse engineered hardware but you get the idea.

The DIGI Retroboy has a 3″ screen with a resolution of 960×480 which is a nice size and one that handles viewing angles and colours well.

The screen and the start/select buttons are shifted out of the console slightly, obviously to fit more space for the battery but it’s a feature you either love or hate.

The D-PAD and buttons are perfectly located, we would have preferred them to be a bit chunkier, and an analogue stick would make this thing so much better too but as mentioned, this handheld isn’t perfect.

You have your volume rocker on the side, as well as your power on switch. On the top you have your two thin triggers which are responsive but not as bouncy as we’d like.

We wish they were a little bigger too, sometimes you think you mis-pressed because they’re so thin. Next to the triggers you have your Micro USB port for charging, your AV Out and a Gameboy trading cable port so you can actually trade Pokemon and link to other Gameboys or another DIGI Retroboy.

A nice feature for you true Pokemon trainers out there.

The DIGI Retroboy is a slim, wide handheld that is comfortable for long periods of gameplay. the buttons are well placed and the screen large enough to be continuously immersed.

But the lack of an analogue stick and poor location of the speaker makes it hard to call a perfect design. It definitely needs work, but its slim nature, and pick up and go play style makes it enjoyable and fun to play. It’s the perfect pocket sized handheld.

DIGI Retroboy is such a great handheld, and you’d think .a great company would be behind it… right?

Not quite, DIGI, the company behind this product have little to no customer service. If anything goes wrong, it’s hard to get an answer.

We’ve sent over 5 emails over the last 6 weeks to the company asking for help and their future in the handheld market. We have no response.

They have no social media neither so it’s impossible to tweet them should you have a question. If anything it’s actually very unprofessional and for us it really devalues the handheld.

We have no idea what DIGI’s future plans are for this handheld or others it may be producing, but what we can say, is that we want more from them.

How well does the DIGI Retroboy perform?

As mentioned before the DIGI Retroboy is used primarily for Gameboy and Gameboy Advance ROMS. In the box it comes with a GBA cartridge with a TF slot, allowing you to play Gameboy ROMS straight from an SD Card.

And obviously you can insert old Gameboy Advance cartridges in this thing via the built in cartridge slot.

Emulation is good, very little frame rate drops, no screen tearing and the save/load states works as it should. This is the perks of running these games natively, you don’t get all of the major problems that come with poor emulation.

The only slightly downfall with the DIGI Retroboy’s ability to play games is the slightly stretched aspect ration. Now it’s not a major problem, but for those of you that are dedicated in playing in the perfect ratio this might be a problem for you.

But for casual players and those wanting to just pick up and play for a few minutes at a time, this won’t bother you at all and is barely noticeable. But it is there and has to be mentioned in this review.

The DIGI Retroboy is in no way powerful, and with the likes of the Retro Game 350 being out, it’s already outdated, but it does have a place on the market for Gameboy Advance enthusiasts. It plays all of your Gameboy games very well, with very little problems, it’s just the screen that brings it down slightly.

Overall the DIGI Retroboy is a great little pickup and play handheld that’s a refreshing way to play your old GBA cartridges.

It’s slim, pocket sized and very lightweight so its prefect to chuck in your pocket on your next train journey. It plays ROM’s with no problems at all, but the average screen and the slightly aspect ratio hiccup makes it passable for enthusiasts who want perfect GBA gameplay.

Of course, if you’re looking for another option to play your old Gameboy games, then it’s always worth checking out the Analogue Pocket. Not only does it play GBA cartridges, but it also plays your Gameboy DMG and Gameboy Color titles too!

How many of the best Gameboy Advance games do you own? How many have you completed back in the day using one of those annoying little worm lights?