Get ready to pull your best Thriller moves; it’s time to check out the best Zombie games for Xbox 360!

If it’s gore fests you’re looking for, then the next 10 games will give you chills like no other. We’re talking relentless waves of brain-munching cretins, racing from scurrying undead villagers, and swearing so loudly at your TV that you wake next-doors dog.

And trust me, you’ll want the lights turned on when you play Number 1!

No matter how old I get or how experienced I become at playing games, Zombies will always send me into a downward spiral.

An enjoyable spiral though, don’t worry!

So, let’s get started and dive into our first horrifying adventure, shall we?

We’re kicking off this list of the best zombie games for Xbox 360 with a frightening spin off of Red Dead; Red Dead Redemption: Undead Nightmare!

Originally a DLC for Redemption, Rock Star Games released Undead Nightmare as a game in its own right due to how popular it became with fans.

The premise and characters are the same; John Marston wakes up to find everyone has become zombies in the Wild West. He’s the only one that can find a cure and save his family… no pressure.

There’s nothing better than a combo of Wild West antics and zombies. It’s like a gorier version of West World and also would have made a much better plot line for Will Smith’s abysmal film.

With new missions and weapons, tonnes of Zombies, and mythological creatures to smash into smithereens, there’s no chance you’ll get bored playing this game.

Add in co-op modes and competitive deathmatches, and you’re on to a real winner!

The Walking Dead series is an absolute tour de force, as are the iconic comics that no doubt all of you have read by now.

And any came case that has ‘game of the year edition’ emblazoned on it more than deserves a place in out best zombie games for Xbox 360 list.

A cross between an adventure game and an RPG, players must explore freely and collect items as they progress, working through quick-time events in a race-against-time.

And failing to make a decision leads to your, or somebody else’s death!

Luckily, players can use a rewind function to previous decisions that they wish they had made differently in order to turn their luck back in their favour.

As there are multiple choices to make in every scenario, there are so many ways to play (and get things wrong), meaning you might have to see multiple scenarios play out before you find the right path.

Just look at those graphics too; there’s no wonder I sleep with the lights on after playing this game!

Resident Evil 5 takes the 8th spot in this list of the best zombie games for Xbox 360, brining with it amazing HD graphics and some zombies that really don’t know when to give up.

Any Resident Evil game where players can work together as well as against each other is a massive winner in my book.

And to be honest, against these zombies, you’ll need all the help you can get. They can throw objects and shoot at you now, which means you’ve got to act quick and from afar if you have a hope of surviving.

Resident Evil 4 protagonist Chris Redfield takes the starring role once more, working to wipe our more of the residents infected by the Las Plagas parasite.

The same over-shoulder view that we first became accustomed to back in R.E 4 returns too, bringing you into the heart of the action.

Play as both Chris and his sidekick Sheva as they do everything possible to stay alive in an incredibly unpredictable and terrifying world!

Once again, surviving is the main aim of the game in State of Decay, an exploration adventure where players must thrive in a zombie apocalypse.

We’re talking abandoned villages, scavenging for supplies, and having to look after a colony of survivors in a world of depleting resources.

As the game progresses, your colony base can be upgraded and expanded with materials found throughout the game.

Like real life, fatigue plays a huge part in this game. As you fight, you become more tired and eventually have no strength left in you at all. And when your character dies, they’re dead forever, meaning you’ve got to move to another player to carry on working on the base.

Pick your battles wisely and don’t bite off more than you can chew… that’s for the zombies to do!

Taking direct influence from the Resident Evil series, Evil Within is a brutal gore-fest that knows no bounds.

The protagonist Sebastian (strong name) heads to a mental hospital to check out some murders, all of which are horrendous beyond belief.

Work through 16 chapters to try to discover just what the heck is going on, all while finding out the deal of the weird hooded man you spotted on the CCTV.

To say that this is a survival game, surviving is insanely hard. There’s hardly any weapons and whenever you need to use them you’ll probably be out of ammo.

That means that being stealthy is the way to win, but that’s easier said than done when undead cretins are running towards you!

There’s a strong R.E 4 camera angle vibe to keep you on the edge of your seat throughout. Spend collected points to improve things such as stamina and reload time, all while finding and disarming brutal bombs that might threaten to destroy you at any moment.

Oh, and the boss bottles… forget about it. They’ll eat you up before you can even say ARRGGGGH!

Dead Island is another game that brings RPG elements into the zombie game genre. With multiple ways to play and so may items and collectibles to snap up while moving through the game, you’ll certainly be spoilt for choice as to what to do first.

And weirdly, you can literally do whatever you want in this open-explorative title.

Pick from a character pool of players with different skill trees collect point, and work to improve stats through fights, increasing your Fury levels as you go.

Save everything from teddy bears to family members, outrunning or destroying hordes of zombies en route.

As you level up, the enemies get much tougher too, keeping a standard level of difficulty throughout and making things constantly tough for you.

And, when you clear an area, all the enemies come back if you go back into said area. Talk about making a rod for your own back!

Does Resident Evil 4 need an introduction?

The game that changed everything in the Resident Evil series and brought that epic camera angle into the fold is an absolute mammoth title. And it looks glorious over on the Xbox 360.

For starters, the zombies in this game know no bounds. They’re coming for you from the very beginning, fighting back through the Spanish village you’re passing through as you try to fight the effects of the Las Plagas parasite.

Instead of just trailing around pulling their legs and making an ‘urghhhh’ noise while trying to take bites out of you, the zombies in this game can team up to eat you.

They carry power tools and explosives, for crying out loud, working together to trap you so you can’t escape.

Aim for their heads and don’t let them get too near. The fact that you’re looking over Chris’s shoulder makes it so much more real, and when those zombie villagers get near, you’ll 100% need to stick your brown pants on!

The zombies mode in Call of Duty: World at War was, and still is, incredibly terrifying.

Once the main mode is done and dusted, Nazi Zombies becomes available, with players trying to survive against hordes and hordes… and hordes of undead monsters.

You’ll need to board up windows, collect power ups, and basically find places to hold the fort in a bid to stay alive.

There are multiple maps to unlock, each more brutal than the last.

Night of the Undead and Swamp of Death are two of my personal favourites, if using the word favourite for such a harrowing experience actually counts…

Let’s be honest; Call of Duty is exciting in its own right, but having the chance to blow up undead Nazi’s will never, ever get old. And it’s the main reason that I still go back to this game again and again.

Some of you might have seen the sequel in our list of the best zombie games for PS3, but the original still holds an incredibly special place in our hearts.

Players take a photo journalist on a mission to get the story of a lifetime, a journey that very nearly takes his own life in the process!

Like Dead Rising 2, players have 72 hours to complete a series of tasks. One hour in real life equals 12 in the game, meaning you’ve basically got 6 hours to slay zombies and stay alive in.

With only one save slot, you either live with your mistakes or restart the game and retrace your steps back to your current point,

Infinite mode leaves players running around trying to survive as long as possible until they die. There’s no happy ending in that mode, but you can rescue as many survivors as possible to make yourself feel better!

The results are in, and Left 4 Dead 2 is officially the best zombie game for Xbox 360!

Taking place after the events of the first game and with different characters this time, players need to fight their way through an infected area to an evacuation point in order to be airlifted to safety.

Playing through the eyes of a survivor, you have to battle both zombies and the elements in order to survive out in the open.

Smashing zombies with a guitar and then pumping them full of lead with shotguns never felt so good. Jump into multiplayer mode for one of the maddest deathmatches around, and play through multiple game modes.

I’m a big fan of the realism mode where the zombies can only be killed by a headshot, a tough trial for the true hardcore zombie killers… of which I clearly am after this article!

If you’re looking for an immersive zombie experience that feels as close to surviving a real apocalypse as possible, then look no further than Left 4 Dead 2! 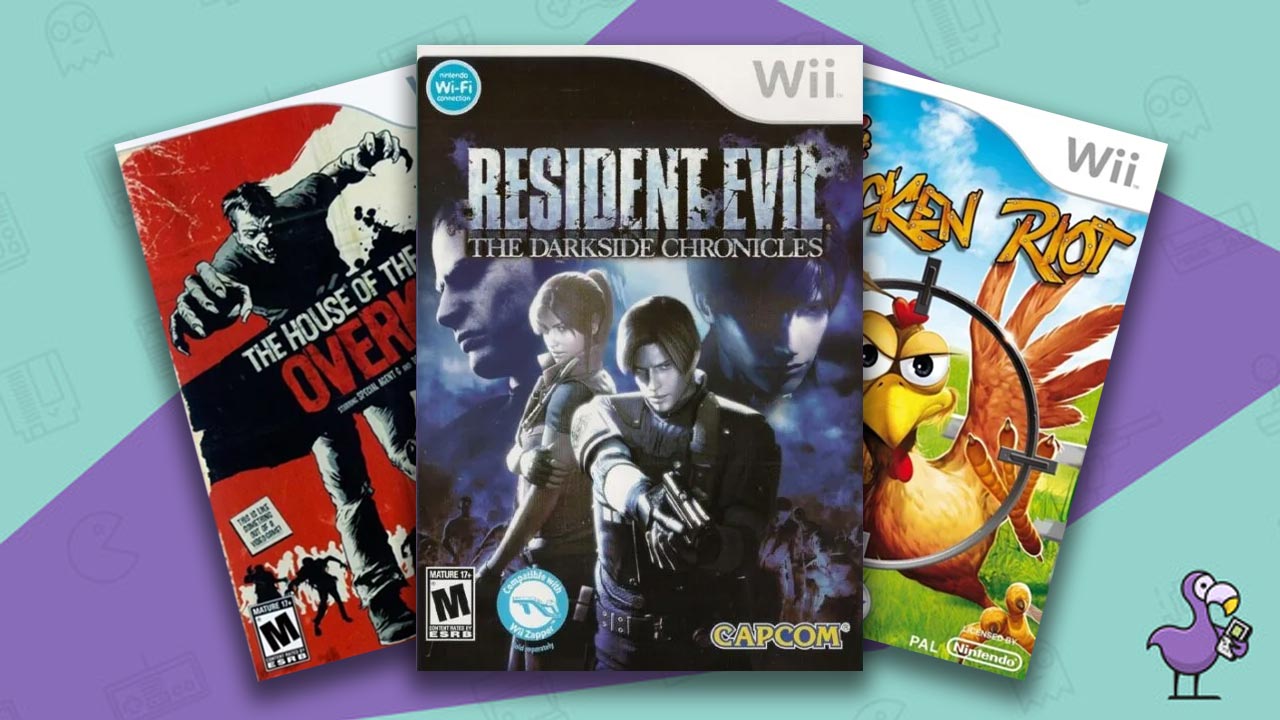