If you live with someone who says ‘Pika’ far too much, then you definitely need this list of the best Pokemon toys of 2021!

No matter what occasion you’re looking to buy presents for, this Poke-licious gifts are perfect for the ultimate Nintendoids in your life.

From gadgets that get them outside to figurines that will supercharge their imagination, we’ve compiled a list of the 20 best Pokemon toys on the market that will make someones day a heck of a lot brighter (especially Number 14!)

So, let’s stop the waffling and crack on with the list!

First up on our list of the best Pokemon toys is the ultimate way to play Pokemon Go or either of the Pokemon Let’s Go games for the Nintendo Switch; the Pokeball Plus!

Instead of wielding a Joycon or swiping your finger on your smartphone, players can now hold a Pokeball for catching pocket monsters, just like in the games and TV show.

Complete with a joystick form moving your character around the screen and choosing actions, the Pokeball Plus givers every gamer the chance to have the ultimate Pokemon trainer experience!

Pokemon Celebrations is by far the best Pokemon TCG set to come out in years. It’s a mix of new and old cars the “celebrate” the last 25 years of Pokemon.

This set features the classic base set Charizard that is a part of pop culture, which comes with a new 25th anniversary stamp on the front ready for you to start collection. Not only that, the trainer box comes with a selction of older packs too, alongisde 10 fresh and ready celebrations packs to open.

I have been collecting these ever since it release in October 2021, and I can’t get enough of it. THere’s some classic EX cards, shiny cards, a gold Mew and the three original starter Pokemon to find.

It’s the best TCG set for a while, and because they’re some what “limited” any collector and Pokemon fan will be happy to have these because they’ll be incredibly valuable in years to come and maybe making them very rare Pokemon cards.

If you’re a Pokemon game fan, then the chances are you’re already acquainted with the next entry in our list of the best Pokemon toys.

Pokemon Sword/Shield took the world by storm after the release of Pokemon Let’s Go Pikachu & Eevee dropped. Sure, those games were good, but we all craved a brand new adventure to sink our teeth into.

Sword and Shield provided, although they could have kept that idiot Hop out of the game; he does my head in.

Travelling into the Wild Zone for the first time, Gigantamaxing Pokemon, riding a bike across water; those are just some of the things that I loved about these games.

And, catching Zacian and Zamazenta could be the best moments of my Pokemon playing career!

Sometimes you just can’t beat a good-old-honest action figure set, which is why this Pokemon Figure Battle Pack is so much fun and the perfect present for young Poke-fans in your life.

It’s all well and good playing games on screens, but taking up battles and fights using your imagination will always be the best way to have fun. The possibilities are endless!

This set comes complete with eight figurines including Scorebunny, Grookey, Sobble, Pikachu, Jigglypuff, Cubone, Vaporean, and Magikarp. With movable pieces for action strikes (let’s face it, they’re all going to be on gormless Magikarp), your young Poke trainer is sure to have tonnes of fun.

Next up on our list of the best Pokemon toys of 2021 is a game that divides families and causes more arguments than ever, but it’s still one of my favourite board games of all time! Monopoly: Pokemon Johto Edition is easily my favourite version of the game too.

I had to order this game from America, and man was it worth it. It even has a fast edition for players that don’t want to spend three days battling it out.

If you found yourself doing a lot of walking while playing Pokemon Go, then the Nintendo Pokemon Go Plus accessory is for you.

With this nifty Pokemon gadget, players can carry on playing the game even when they’re not looking at their phones. Gain steps while walking, be notified about Pokemon in the area by a vibration, and press the device to catch Pokemon.

In other words, if you’re obsessed with Pokemon go but also don’t want to be looking at your phone for an entire walk, then this is the gadget for you.

Sometimes it’s not possible to have your cake and eat it, but in this instance, it is!

Next up on our list of the best Pokemon toys is this Pokemon Carry ‘N’ Go Volcano Playset, an easy fold up play island jam packed with exciting features.

With an erupting volcano, battle launchers, movable parts, and secret doors, this playset will certainly keep your little one happy for hours.

It also comes with all the original start Pokemon including Pikachu, Charmander, Bulbasaur, and Squirtle.

And when you’re done playing, it all folds up into a box for carrying to the park, into the car, or back into the toy chest. Simples!

My Partner Pikachu takes the 8th place in our best Pokemon toys list, giving Pika fans a chance to have a connection with their very own electric mouse.

With movable arms and ears, light up tail and cheeks, and over 100 interactions, this toy is basically as close as we’ll ever get to owning a real Pikachu.

And the best bit is that it talks back to you too! Now you can have those epic conversations with Pikachu that you’ve always dreamed of.

I wonder what he thinks about Brexit… probably ‘Pika Pika’, which would be correct.

If you’re stuck for what to buy someone that loves Pokemon, then you really can’t go wrong with a soft Pikachu toy.

Listen, everyone loves cuddly toys, and this one could be one of the cutest that I’ve ever seen. Just look how happy he looks here!

At 8″ tall it’s the perfect size for your bedroom, office, or games room.

If I told you that with the Tomy Pokemon Throw ‘N’ Pop Duel Pikachu Pokeball & Cubone Repeat Ball Figure Set you could challenge your friends to real Pokemon duel, then would you be interested?

Of course you would; that’s the whole reason you’re here looking at the best Pokemon toys in the first place!

The ball opens on impact with any surface, launching The Pokemon inside into action. Add new Pokemon to your collection and gather more balls for storage.

The set comes with Pikachu and Cubone, a ball, and a belt clip to hold your Pokemon just like Ash Ketchum!

If you’re a fan of the original Pokemon Snap for the Nintendo 64, then New Pokemon Snap provides an enhanced experience with better graphics, new concepts, improved controls, and even more Pokemon to snap!

If you’re the kind of person that wishes they could watch Pokemon in their natural environment and prefers an easy life as opposed to traipsing backwards and forwards between Pokemon Centers, then this is the game for you.

Get entries for your Photodex by luring Pokemon into shot using fruit and berries. Snap great photos to earn the most points. It takes patience and a steady hand; have you got what it takes?

Pokemon Trainer Guess: Ash’s Adventures takes the 12th spot in this list of the best Pokemon toys of all time.

So, you think you’re a Pokemon master eh? This little toy will prove whether you are once and for all.

Players think of a Pokemon… any Pokemon that Ash found from Kanto to Alola, and answer questions set by the ball. The ball will then guess which Pokemon you are thinking of.

Can you outsmart this portable Pokebrain ball?

There’s also a booklet with information on all the Pokemon too for you to swot up on!

Every Poke-mad boy or girl would love to open up a Shining Fates Elite Trainer Box.

What’s the bet bit about getting a pack of Pokemon cards? It’s the shinies, right? Everyone knows that.

The trouble is that they’re so hard to get, but not in this boxset. Get ready to unveil over 100 shiny cards including Gigantamax shiny Charizard, as well as tonnes of Pokemon V & Vmax cards.

With a rulebook, dice, and flip-coins, this box has got everything to get you playing with Pokemon cards the right way, and the collectors box looks fantastic!

If you’re someone who likes a light on at night, then this 3D Crystal Ball LED Night Light could be the most useful entry in our list of the best Pokemon toys.

Each crystal Pokeball has an etching of a Pokemon inside it that looks like a real 3D pocket monster. With the colour changing light, they look so real that you could almost reach out and touch them!

Choose from Eevee, Zapdos, Mewtwo, and many more!

With 6 boxes per case, 36 packs per box and 10 cards per pack, there’s plenty of monsters, training cards, and shinies to collect from the Alola region.

Become acquainted with the Ultra Beasts and unveil a special energy card for battles!

There’s certainly a lot of exciting unwrapping to be had here!

If you enjoyed the Detective Pikachu film or wish that you could live your life as Greninja every day, then this set is for you (or ‘your friend’ if you’re too embarrassed to admit it).

Wear the Greninja pin, lovingly unwrap the Pikachu booster packs, and use the included code to play the Pokemon card game online!

It’s the gift that keeps on giving!

Dropping it at number 17 in our list of the best Pokemon toys is this Pokemon Kids’ Quartz Watch.

Featuring a still of the ultimate Poke duo, Ash and Pika, this digital watch is a fun present for any potential Pokemon Trainers who turn the playground into their personal Pokemon Gym.

With a simple to read digital display, this Poke watch will ensure your little ones are no longer late for anything ever again.

This watch flashes, has. comfortable strap, and comes with one-year warranty!

We all feel like a snoozy Snorlax somedays, which is precisely we all need a Pokemon Snooze Action Snorlax toy in our lives.

At 10″, this cuddly guy is the perfect buddy to snuggle up to. Listen out for his belly rumbles and feed him using the included Pecha Berry when he’s awake.

And if you really want to wake him from his slumber, then use the Pecha Berry to pull him out of sleepy town.

Just don’t blame us if he wakes up cranky!

Pokemon Mystery Dungeon: Rescue Team DX takes the 19th spot in this list of the best Pokemon toys of 2021.

In a twist from normal Pokemon games, players play as Pokemon that can talk to one another instead of trainers. Team up with classic characters to solve mysteries on the Switch in this remake of the first Mystery Dungeon game.

Choosing a starter Pokemon is a fine art too. You pick your character by answering sixteen questions to chose The Pokemon that best fits you personality.

There are a whopping 380+ pokemon to Meet in this game. Pick the ultimate team and try to solve puzzles in levels that are forever changing. It’s a great game and something alternative to the original format.

Last, but by no means least, is this Mega Construx Pokemon Charizard Construction Set.

We’ve had a Lego Zelda set and Sonic the Hedgehog Lego set, but there isn’t a Lego Pokemon kit on the market yet.

These Mega Construx figures fill that block-shaped gap. Build the mighty dragon from 223 bricks, complete with movable wings and fire coming out of his gaping maw.

Collect other Mega Construx Pokemon too to make your own blocky Pokemon battles. Bricks will fly when battle commences! 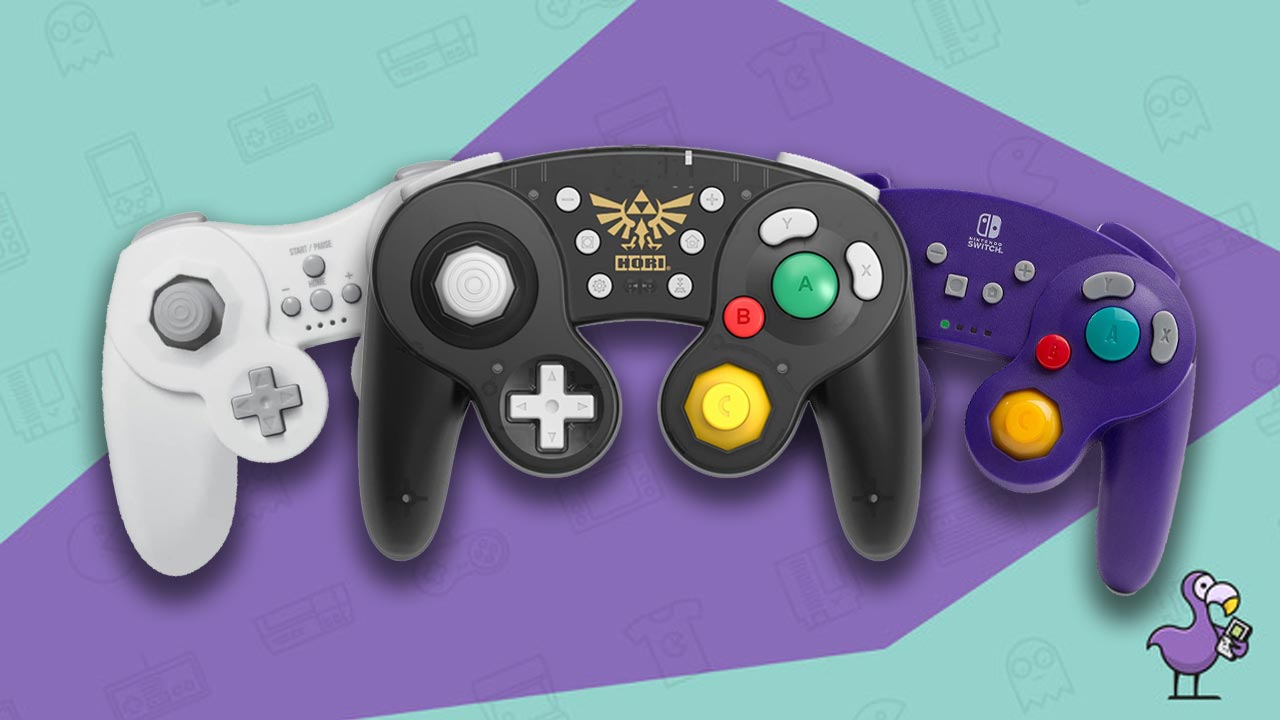 How Much Is A Gameboy Advance Worth Today?