It’s time to break out the stylus and open up Nintendo’s beloved dual-screened console as we check out the most underrated DS games!

Though it saw huge mainstream success, Nintendo’s DS was an underrated console for many gamers. It had lots of terrible shovelware and lazy, touchscreen-enabled ports, and was perhaps a bit tougher to wade through the detritus and find the hidden gems on the system.

With more than 3000 titles in the DS game library though, there’s an awful lot that may have been overlooked. Beyond the usual suspects and big names, there were plenty of games that didn’t receive the commercial success they deserved.

So let’s take a look at ten of the most underrated DS games here!

Do we need to explain who Pac-Man is and where he came from at this point?

One of the most iconic characters in video game history, Pac-Man has starred in lots more types of game than just the maze-style experience he first featured in (just check out our best Pac-Man games list for a good journey through the character’s gaming history!).

This early DS title from Namco is pretty forgotten these days, but it’s a fun and original take on the Pac-Man formula. Plus, it makes really inventive and amusing use of the DS touch screen.

In Pac-Pix, you’ll draw Pac-Man himself, who becomes animated regardless of how misshapen your touch-screen skills may make him.

You’ll also need to draw different objects as you progress – such as bombs and arrows – to deal with the various types of ghost that pop up to ruin Pac-Man’s day.

It can feel a little like a tech demo at times – and that’s probably because it started life as one. Still there’s no denying that this is an unfairly overlooked and forgotten title from Pac-Man’s rich and varied history.

Pac-Pix is definitely deserving of a place on the most underrated DS games list!

For some reason, the Puyo Puyo games were often reskinned and filled with characters from other franchises when they first came to the West in the early 90s.

Audiences outside of Japan would have likely first experienced the Puyo Puyo games as Dr. Robotnik’s Mean Bean Machine for Mega Drive/Genesis (which you’ll find on our best Sega Mega Drive games list) and Kirby’s Avalanche for SNES.

Regardless of how they were packaged, the Puyo Puyo games always had brilliantly addictive puzzle gameplay. It was made charming and adorable by the little translucent beans you’d join together to make coloured chains of them disappear.

Their little eyes – and the way they’d glance either at you or each other depending on how they joined together – gave the games an awful lot of personality.

This DS version of Puyo Pop Fever by the legendary Sonic Team brought even more personality to the game. This time, in the form of the brilliant character designs for players and their enemies.

Yet it seems to have been mostly forgotten, which is a real shame.

It’s well worth hunting down and playing – and more than earns its spot on the most underrated DS games list!

They say never judge a book by its cover, but the atrocious Bubble Bobble Revolution cover art really is very off-putting.

It shouldn’t be difficult to make Bub and Bob – the dinosaur stars of the Bubble Bobble games – look cute and appealing, but someone clearly didn’t get the memo.

It’s a shame, because Bubble Bobble Revolution – despite also featuring a slightly unappealing in-game art-style too – is actually a really fun continuation of the series. It’s got some neat ideas that use the DS and its unique features really well.

At times, you’ll use the touch screen or even blow into the microphone to activate fans that keep your bubbles afloat. It’s really cleverly done!

Not only that, but the original arcade version of Bubble Bobble (one of our choices for best arcade games of all time!) is also included in its entirety.

That makes Bubble Bobble Revolution pretty much a must have for fans of the series.

Players take control of young starship commander Yuri – and will find themselves in charge of a fleet of starships in their travels across the galaxy.

A massive selection of ships and customisation options allow you to personalise the fleet to your preference and play-style. Take on space pirates and evil dictators throughout the game’s absorbing story.

From the makers of Steel Battalion (which you’ll find on our rare Xbox games list), Infinite Space is a unique experience that never got the spotlight it deserved.

And, it never came to any other platforms either!

Not many people do.

Despite the arcade, light gun-based origins of the Point Blank games, Point Blank DS is actually a really good fit for the DS and its touchscreen.

40 different mini-game stages – taken from the best of the first three console Point Blank games – are included, with head-to-head multiplayer (using just one game card) being the icing on the cake.

Point Blank DS is a superb experience that more DS owners need to check out. It’s unquestionably one of the most underrated DS games ever!

Puzzle games have a natural home on handhelds, as players can typically tackle a few stages at a time while on the move, without having to worry about finding save points or going through reams of expository dialogue.

Soul Bubbles almost doesn’t fit the underrated category, because critics loved it – but it just didn’t seem to find an audience among players, which is a crying shame.

This is partly because, bafflingly, it was a Toys R Us exclusive in the US, which severely limited the potential for Soul Bubbles to succeed upon release.

In Soul Bubbles, you’re tasked with rescuing lost spirits by drawing bubbles around them, then leading them through dangerous stages to get them to safety.

Though initially straightforward, it becomes a real challenge after the first few worlds – but the beautifully drawn stages, relaxed ambience and brilliantly absorbing gameplay will keep you persevering through to the end of Soul Bubbles.

Nintendo are no strangers to cleverly merging their franchises and characters with pinball.

Nintendo even teamed up with Gottlieb in 1992 to bring Mario to a real pinball table, in Super Mario Bros: Mushroom World!

Bringing the cool, metallic sci-fi aesthetic of Metroid Prime to the world of pinball should have been an obvious choice and a real slam dunk then, right?

Sadly, Metroid Prime Pinball, which sees Samus stuck, cleverly, in Morph Ball form as she rolls around the playfield, didn’t get the kudos it deserved.

Power ups, bosses and multiple missions feature, along with single card multiplayer for up to eight players.

Like Pokemon Pinball on Game Boy Color, the addition of rumble – a DS Rumble Pak was included – makes the game even more immersive; it feels like there’s a real ball rolling around inside your DS at times!

It’s a game that’s crying out for a second chance, and one which we didn’t hesitate to add to our most underrated DS games list.

Tower defense games were all the rage a little over a decade ago; most games in the genre offer an addictive, compelling and satisfying hybrid of real time and turn based strategy.

Ninjatown is no different, with an adorable cast of cute ninjas – each with their own strengths and weaknesses – that are used to defend the eponymous settlement from waves of invading enemies.

The DS touchscreen is a perfect fit for Ninjatown’s tower defense action.

The clean, bright and colourful visual style ensured absolute clarity even on the small screens of the DS, with the dual screen setup also being perfect for the game’s style.

It’d be great to see Ninjatown make a modern comeback. The unique visuals and even the gameplay mechanics have aged really well, marking this title out as a clear choice for the most underrated DS games list.

Despite the success of the first two Advance Wars games on the Game Boy Advance – which still stand tall as two of the best games ever made in our humble opinion – this second DS entry is nowhere near as fondly remembered.

Partly, that’s perhaps because it took away the fun, colourful design of the first three games (which includes the third title, DS game Advance Wars: Dual Strike) and replaced it with a much darker, bleaker story and overall tone.

Yet it’s still an incredibly strong turn-based strategy game, which has been unfairly forgotten.

Advance Wars: Days of Ruin (which was known as Dark Conflict in Europe and Australia) also offered online, as well as local, multiplayer options and the ability to share custom maps too.

It definitely deserves a place on the most underrated DS games list!

Countless games over the years have taken an awful lot of inspiration from the Aliens franchise. That includies one of the best games of all time: the atmospheric platform adventure Super Metroid (which you can check out on Switch now – and you’ll find it on our list of the best SNES games on Switch).

So it’s only fair if the Aliens franchise itself takes a little of inspiration from other video game titles.

And yes, it owes more than a little to Super Metroid (so I guess they’re even and don’t owe each other anything now, right?).

This squad-based adventure is brilliantly designed, with a team of Colonial Marines investigating familiar locations and ships from the film Aliens. It’s not long after all of the horrific events of the movie have taken place, either.

Permadeath means that if one of your marines dies, they aren’t coming back. It’s a tense and scary adventure with bags of atmosphere.

Infestation is a genuinely impressive achievement on the DS, a game that’s incredibly unfairly overlooked, as well as underrated.

Aliens: Infestation is a clear choice for the very top of the most underrated DS games list – and it’s a game we’d urge you to seek out and play!

10 Best Mario Games on Nintendo Wii of All Time

10 Best Star Wars Games On Nintendo Switch Of All Time 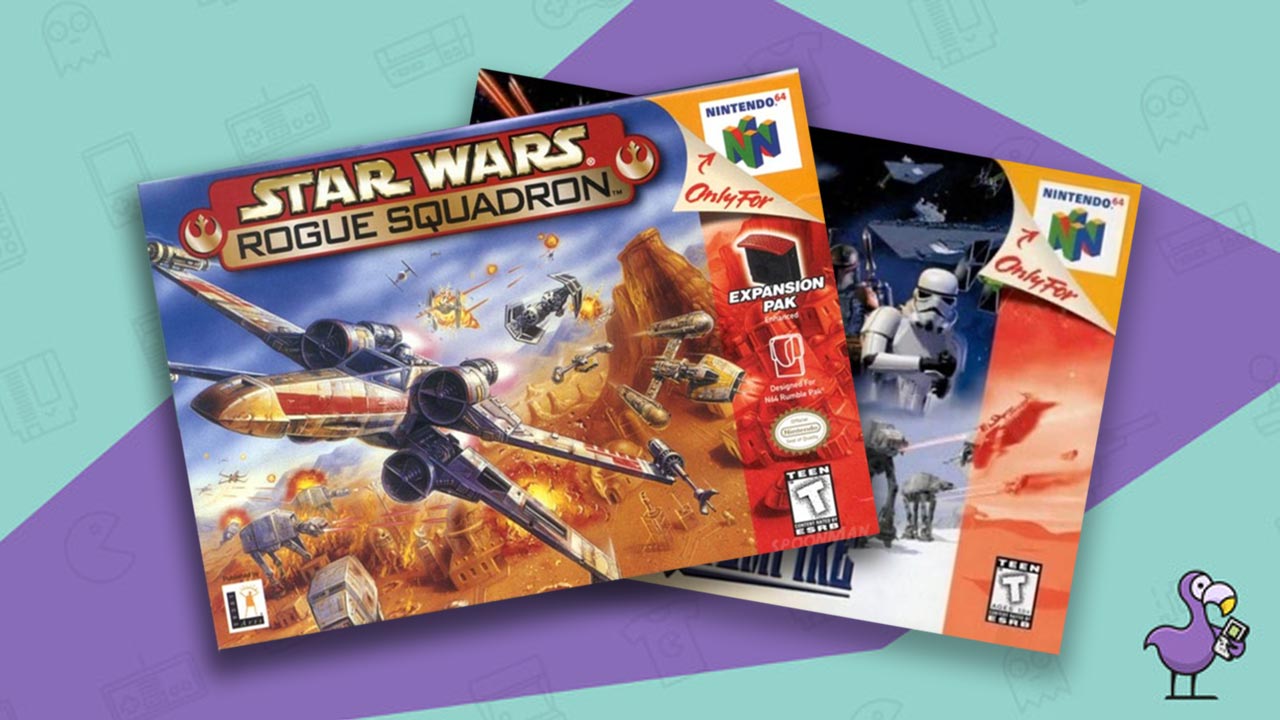