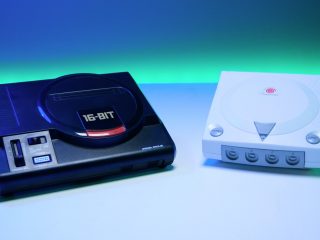 Bored of your old charger? Ever thought you’d need a SEGA wireless charger to complete your retro gaming set up? No, us neither.

But if you’re looking to geek out your office, then you’ll be happy to know that SEGA has revealed 3 new wireless chargers that look like their old consoles.

If you enjoyed playing some of the best dreamcast games of all time, then there’s a Dreamcast edition just for you. At £30.99 it’s no cheap investment, and the chargers themselves are made of a plastic material which struggles to keep your smartphone in place.

The Dreamcast SEGA wireless charger is the smallest of the 3, at about 4inches in diameter, making it perfect for ear pods and smaller phones, but when you put a normal sized smartphone on it, the Dreamcast almost disappears.

We were also expecting the buttons to be somewhat press-able, but unfortunately, none of them move. The power on light is red when not in use, and blue when charging, which is a neat nostalgic feature.

If the Dreamcast isn’t your thing and you preferred playing the best mega drive games, then there’s a much bigger Mega Drive SEGA wireless charger that suites smartphones better.

This one is slightly bigger and fits a phone more comfortably, none of the buttons press in, but you do get the indication light in the right place.

The rubberised feet is a good touch, stopping your SEGA wireless charger from slipping away, and the attention to detail is stunning. No feature is missing. The included cable is 1M long, a bit tight for us, a 1.5M USB-C cable would have been preferred, but we’ll survive!

The last variant is the SEGA Saturn, so those of you that love playing the best SEGA Saturn games, this one is for you.

Just like the other two, it’s made from a plastic material, no detail is missed and it’s slightly bigger than the Dreamcast version, making it more suitable for phones. All of these SEGA wireless chargers are $30.99, but be prepared to pay for shipping unless you spend over £50.

As of this moment in time, it looks as if these SEGA wireless chargers are a European exclusive, so it might be tricky for our US readers to get hold of. We have started to see them pop up on eBay for around $80+.

Overall, we were a little disappointed with these chargers. The fact they were made from plastic makes any product on top of them slip around, making it an untrustworthy product to place your expensive smartphone on.

We would have preferred SEGA making a silicone shell for their chargers. This would stop your devices from slipping around.

And we’re not sure why they didn’t make the buttons clicky, that would have been a nice feature, especially when we’re paying a whopping £30 for one. You can buy a Powkiddy V90 for that, and that’s far more fun!

They charge through cases which is great, and they genuinely look cool on our desks, we’re big Dreamcast fans here at Retro Dodo, so we will be using ours daily, but why not use a silicone shell?

We advise waiting for these to drop in price towards the end of the year. If these were £20 we would recommend it, but for now, hold fire fellow gamers.