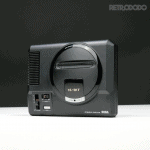 Nostalgia at its finest

The Sega Mega Drive Mini is here, or as our friends over the pond like to call it, the Sega Genesis Mini. It’s Sega’s latest mini console that’s packed full of nostalgic games all in crispy HD.

We’ve had ours for about two weeks now and we want to run you through our opinions about this product, because that’s what we do here at Retro Dodo, we tell you if products are worth your hard earned cash or not!

It was one of Sega’s most popular games consoles and it had some playable bangers (a British phrase for something great) such as Earthworm Jim, Dynamite Headdy and the old school Sonic The Hedgehog.

It was a direct competitor with Nintendo and in my opinion it smashed them out of the water (don’t @ us), the console quality was far better, and its over saturated colours and strong characters made it one our most memorable consoles ever.

Even the soundtracks used within the games are still somehow embedded into our brains and are playing as we write this review!

Taking A Look At The Sega Mega Drive Mini!

Let’s start with the packaging, Sega has kept EVERYTHING as close to the original as possible, even the box itself.

They’ve left the 90’s square grid as the background, kept the awesome logo, and obviously our good pal Sonic is still pointing in the air almost 20 years on.

The box is a bit smaller, obviously because they don’t need to waste packaging on making it identical as the console itself is much smaller. The box will certainly please you collectors out there, this thing looks great.

In the box you are greeted with the Sega Mega Drive Mini, two classic wired controllers, a power cable and your HDMI cable. Everything comes neatly packaged, as should be.

The great thing about the Sega Mega Drive Mini is the incredibly easy setup, it takes seconds to get this piece of kit going.

It’s literally a plug and play system. Connect it to power, then connect it to the HDMI slot in your TV and wallah, you’re ready to get your game on.

The first thing we noticed when we turned on the console was the muscle memory holding the controllers.

The controllers are by far the most nostalgic thing about the Sega Mega Drive Mini. It’s liking going back two years, and turning into a child again. The controllers hasn’t been changed, it still has the oversized D-pad and the thick buttons, just the way we like it.

The only downfall with these controllers are the short cable length, we sit quite close to our TV, but still seemed to be worried about the length of the cable, for those far from their TV screens, you will 100% need an extender.

The cable is around 6ft long, we want at least 10ft.

The console itself has a cartridge slot that you can’t use for games but it does open up, so yes you can stick your finger in it should you want to… penetrate it?

Everyone does it, but we’ll let you know that it does feel weird doing so. It comes with all of the Sega branding, the infamous On/Off switch which is used as normal, a volume rocket which doesn’t work and a reset button which does in fact work also.

Finally your two USB slots are on the front for your controllers.

How Well Does The Sega Mega Mini Drive Play Games?

First I want to talk about the menu in the Sega Mega Drive Mini. It’s a clean user interface with high saturation, nostalgic theme tunes and an easy way to discover all 40 of its games.

Everything is laid out just as it should be, game artwork as the main way of seeing what to choose, and then game titles underneath.

You can order the games in alphabetical order, date of release, number of players and more. This was a nice feature as it sped up our process of finding the games we love to play.

We also noticed, if you change the language to Japanese you actually get all of the Japanese artwork for every game, plus the Japanese version of the games, meaning some will have extra levels that you don’t get in the English version.

This just goes to show how thought out this product is from Sega, the small touches go a long way. and they’ve nailed it.

When you start a game you will be greeted with an incredibly fast load time, just a few seconds in fact.

Once you’re in a game you can hold the START button to access the System Menu which allows you to save or loads 4 different states, reset and access to the main menu should you want to quit the game. It’s an easy to use, simple UI that will allow young gamers and old to know exactly what to do without being confused.

What Games Are Available?

In terms of selection of retro games that the Sega Mega Mini Drive has in its bank is phenomenal, and we’ll be honest, we don’t think Sega could have picked a better 40.

The selection is great and there’s something for everyone, there’s games in here that you’ve never played, and nows the time to dive in. They hands down the best Sega Genesis games. Below are the 42 games included:

24. Alex Kidd in the enchanted castle

27. Phantasy Star 4: the end of the millennium

Do The Games Feel The Same?

The games play almost flawlessly, the 720p HD gameplay makes it feel crispy all while keeping its nostalgic pixelated look.

The controller has a fast response rate letting you play fast paced games with ease. Save states and load states work as they should and load from the exact frame you left it, checkpoints are no more!

Playing these old classics at 60fps is incredibly, you forget how much you needed silky smooth frame rates in Street Fighter II, and how dang good Sonic looks on the big screen.

The only mini issue we had was sound. In two out of the 42 games we had issues of the sound cutting out for about a second ever 30 seconds or so.

Now this isn’t a major issue, and to be honest you forget about it, but while playing Dynamite Headdy for hours on end this issue quickly got annoying.

This could be just our unit, but we’re reviewing it as if it was one we bought with our own money.

Is This Better Than The Mega Drive Emulator On The Switch?

Honestly, the answer to this question will all depend on how much you love Sega. If you’re really into your hardware and want to have a little Sega Mega Drive (or Genesis) on show, then you can’t go wrong with this bit of kit.

Personally, we do love having the option of playing Sega games on the go while playing in handheld mode and playing some of the games with our friends online, especially when adding the official Sega controller into the equation.

There are around the same number of games on the Mega Drive list above as on the Switch too, and more games are arriving all the time. If you have a Switch, it’s worth having a look.

And let’s face it, even if you don’t use this Mega Drive Mini, it will look wicked on a shelf!

Overall the Sega Mega Mini Drive is an excelling retro gaming console, one that we’ve been waiting for every since it’s announcement.

Even with its small cabled controllers and weird sound glitch in some games it’s still one of our favourite mini consoles yet.

They’ve kept the old school design perfectly, the plug and play aspect opens up the games console to any age and the list of games is perfect. Sega have really taken into consideration what gamers they want to entertain, from old gamers to newcomers.

The controllers even though are cabled still feel like they did when I was a child. Big, bulky, but responsive.

Even the fact they chucked in Japanese versions of the games makes me smile as I write it. Sega know their audience and if you’re a Sega fan, this thing will keep you entertained for hours on end and it will become like a child to you.

We’ll admit we don’t spend 4 hours a time on this thing, it’s very much a “I’ve got 30 minutes before i have to leave” kind of console, and tied with the save states, you can pick it up from the exact frame you left before you had to go out.

We think the $69.99 is reasonable but with wireless controllers, or controllers that can reach our hands at the least. We would love to see two versions of the console, a cheaper $49.99 version which is this one we are reviewing, and a more expensive version priced at the same $69.99 but with a wireless controller.

It’s a nostalgic nod to the 90’s that we absolutely adore, and the selection of games could not be better. The Sega Mega Drive has still got it, 20 years on.