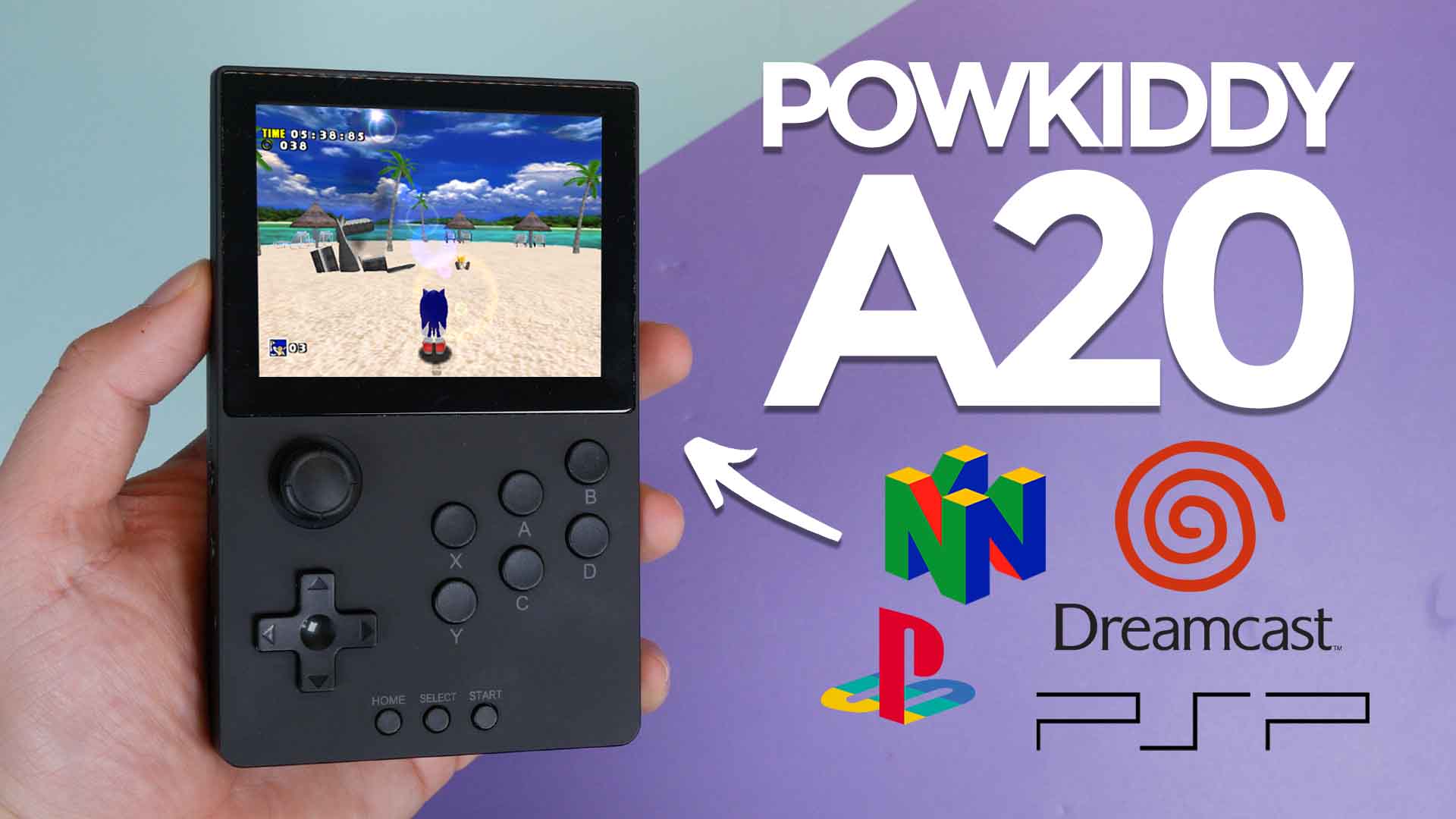 So close yet so far

It feels like Powkiddy are building handhelds quicker than they can release them and as mentioned in many of our Powkiddy reviews they have a tendency to rush their products into production before taking customer comments into consideration.

The only anomaly that really surprised me was in fact the Powkiddy Max 2 which they released in November, but I guess you could say they got lucky with that one?

Now in the office I have been testing the Powkiddy A20, a vertical handheld that reminds me of the Retroid Pocket but this one here has a new chip inside and is moving away from the RK3326 in hopes that it can touch on the best Dreamcast games and PSP emulation without any hiccups.

So, let’s see if they’ve packaged that power alongside decent build quality!

At a first glance you could mistake this with the upcoming Analogue Pocket, Powkiddy have gone for the matte black look with large screen bezels, clunky buttons, no branding and trigger buttons at the back which end at the screen giving it a slimmer head so to speak.

This design has grown in popularity since the RG351V and we’ll admit, it’s a much more comfortable design compared to the older vertical handhelds like the Gameboy DMG and Gameboy Color.

But in Powkiddy fashion, it feels terrible. The only decent feature on the entire body of the handheld in my opinion is the screen, and even that isn’t perfect. The screen is a 3.5” IPS display with a resolution of 640 x 480 making it perfect for Dreamcast games and older consoles.

It has some pretty good viewing angles and the colours are nicely saturated, but at times I did wish the screen could be a little bright. I am also not a fan of the large bezels, these make the handheld look old, and outdated.

Moving down to the base of the Powkiddy A20 you’ll find a wide range of buttons. It’s one of the few handhelds out there that have dived into six face buttons and I personally love that, it’s about time a handheld took N64 gameplay seriously, and with that they have decided to add all 6 buttons to the device.

The action buttons themselves are very close to the contacts requiring very little force to press them, and when you do you get this soft click sound which in my opinion doesn’t feel right. That’s because they haven’t added a rubber membrane underneath

I like solid, bouncy buttons that you need to push right down into the handheld when playing my retro games, I know that Powkiddy have gone for the modern look but it takes away that nostalgic feeling, and because every other button on the handheld including the DPAD and the shoulder buttons are incredibly clicky which makes the handheld feel less premium.

It sounds like I’ve just broken every bone in my body.

The analogue stick is identical to that of the Nintendo switch but doesn’t have L3 functionality and the DPAD, my god, awful. Again it’s super sensitive and when pressing you’re not entirely sure where you’re pressing, there’s little to no movement, meaning at times i found myself just a little confused when playing fighting games. The DPAD literally feels like a brick.

The smaller buttons are fine, nicely located and do their job, but the speaker is located in quite literally, the worst place possible.

If you’re me, you like to rest your vertical handhelds on your pinky, and for me the speaker sits bang on my pinky, distorting the sound of an already awful sounding speaker.

Now moving to the back, I quite like the little to no branding, and the matte finish looks sleek when kept clean, but not so much after you’ve been munching on Doritoes.

The shoulder buttons could be better, but they’re comfortable to play on, and are a good size too, but just take into consideration that they sound like your grandad’s hips are breaking everytime you press them.

Overall it feels like a very low quality handheld, and the buttons combined with the large bezels and the fingerprint magnet shell, it  just makes it feel like a handheld that was released back in 2010.

But the selling point of the Powkiddy A20 is’t the way it looks, but it’s about what’s on the inside.

But what can the new chip actually do and is it better than other affordable handhelds on the market? Well, yes the S90 chip is in fact more powerful than your typical RK3326, meaning it can handle a little bit more in terms of emulation.

Through my testing period I managed to get great PSP and below average Dreamcast emulation out of the Powkiddy A20. That in itself is an awesome feat, and Powkiddy should be proud that they’re using this chip at a $110 price tag, but without Dreamcast emulation, this is going to be hard to sell.

But let me show you around, so as soon as you boot it up, you’ll noticed it’s running on a pre-built Android OS which looks like something straight out of a terrible 90’s toy.

Why they went with this ugly user interface i do not know, but it took me a few days to get used to it. Yes if you like to tinker you can change this but for someone who doesn’t have any experience with retro handhelds you may throw up looking at it for any more than a few days.

We’re not a fan of it, but we can deal with it. So what i’ll do now is show you some clips from some emulators so you can take a look at the quality yourself, i can only apologise for the awful audio quality, it’s the Powkiddy not us, i promise.

So there you have a little look at the gaming experience on the Powkiddy A20. It’s impressed me, I didn’t think we’d be getting such PSP emulation out of a $100 handheld this early, I honestly thought it would be 2022, but again, with poor Dreamcast performance it’s going to be a handheld we advise passing on.

N64 games played really well on here though, and because of the six face buttons already being mapped for me I could play N64 games straight out of the box with no messing around in the settings.

However, the emulation is all the Powkiddy A20 has going for it, everything else about the handheld is below average, even the battery life which comes in at just shy of 4 hours. The firmware although it looks terrible can be changed if you’re into that kind of thing, so my bad points are focused on the externals, the things which unfortunately cannot be changed with tinkering.

If you’re looking for a cheap handheld to run PSP games and you’re not bothered about build quality or design then this could be for you, but because the current retro handheld market is moving so fast there’s a wide number of handhelds just around the corner that will be far better than this overall.

So it simply comes down to how patient you want to be and if you’re big into your vertical handhelds. For me, this is one I advise skipping.