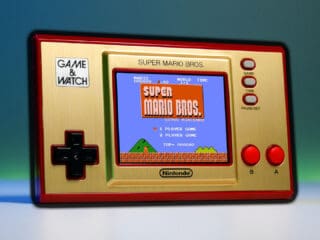 Great for collectors, but that's it.

The New Game & Watch has finally landed on our desks, and we’re here to let you know if it’s worth your hard earned mullah!

This was a surprise to a lot of us when Nintendo decided to announce a remake of one of their oldest handhelds to date. Why? Well, their excuse was to celebrate Mario’s 35th birthday, but we think it’s more of a quick cash grab.

Don’t get me wrong, I love this product, I had a blast unboxing it as you can see in the video above, but it’s certainly a product aimed towards collectors and not gamers.

If you were thinking anything different then you will be disappointed. This is Nintendo’s way of paying respect to the old Game & Watch all while keeping its handheld collectors happy, and it does just that.

The original Game & Watch was first launched in 1980 with the game “Ball”, which is also one of the three games in the new Game & Watch.

Each Game & Watch had one game, and a clock, that’s it. They were a huge success as many fell in love with pocket gaming during this period. Nintendo sold over 40 million units in total and some would say it’s what kick started Nintendo’s handheld career.

Some of the best Game & Watch games are still wanted to this day, for example the Zelda Game & Watch is very rare, and goes for anywhere above $100 on eBay.

Not a lot in all honesty! The box is very well packaged, it has this transparent cover on the exterior that has all of the Nintendo illustrations. Once you slide out the original box, you will see it’s golden side panels ready to open.

Once opened you are greeted with nothing but the new Game & Watch itself, a USB-C cable and a manual. Unfortunately no USB AC adapter, but that was expected.

The packaging is nice and slim lined allowing collectors to store it away without it getting damaged or taking up too much space.

How Does The New Game & Watch Feel?

The new Game & Watch feels sturdy, polished and high quality. It keeps its nostalgic aesthetic and greets it with a couple of modern day features.

It’s a very small handheld, incredibly light, slim lined and one that feels like a credit card, ready to be snapped as soon as you sit on it.

The brushed gold makes it feel like you’re back in the 80’s, along with the classic font used for the buttons and logos.

The front houses a nice sized D-Pad which we had some issues with. The left sometimes activates the up button, so we have to be very precise with our pressed when in menus. Lucky for us the up isn’t used in the 3 games, so it didn’t cause an issue, only in the menus.

The LCD display is incredibly bright, and sits very close to the screen. It has “ok” viewing angles, but in all honest you’ll never notice it. The LCD is so vivid that it actually makes it a pleasure to play on and is one of our favourite points about this handheld.

Then on the right side, you have your 3 menu buttons which change the game, goes into “time” mode and the pause button which… pauses games or sets the time.

Below that the infamous small red action buttons right next to a USB-C port and the on/off button on the side. It’s good to see that Nintendo went for USB-C, as that is the norm nowadays.

Oh, and we almost forgot, there’s a tiny little speaker on the left hand side. It’s a bit directional, so it constantly feels like one side of your headphones is working, but it does the job for those small 8bit noises.

Overall, it’s a well built, high end remake of the old class Game & Watch. We love how they’ve used a crispy display, the latest charging port and the small, lightweight form factor is a blast to play on.

Flawlessly. Remember, there’s only three games within the new Game & Watch, that’s it, and they’re Nintendo’s games, so you’ll know they will run flawlessly because they’re not some rubbish Nintendo Switch Emulator, or glitchy ROM’s. This is Nintendo’s own game.

Loading them up is simple, simply press the “game” button and it will come up with a mini menu over your current game/clock and you select which one you would like to play.

Once pressed it will open instantly, and you can being smashing up those Goombas in no time. There’s no button response delay, no screen tearing, no frame rate drops, it works as it should.

The screen again, is stunning and playing these classic games on a small, slim lined Game & Watch feels great, especially with the high saturation and 8bit nostalgic noises.

The three games that are featured in the new Game & Watch are:

Oddly enough, the one we have been playing constantly is Ball, it has that addictive touch where you just want to keep getting a higher score every time you pick it up. Our current high score is 2370, so if you can beat that throw us over a tweet (@retro_dodo) and we’ll RT it for you, should you have the balls to beat us… see what we did there?

Super Mario 2 is also great, a classic on a new classic handheld, weird, but wonderful. The Game & Watch isn’t the most comfortable handheld on the block compared to some of the best retro handhelds that we’ve reviewed but that’s to be expected.

Mainly because the battery won’t allow that (2 – 3 hours gameplay) and it’s just not that comfortable, plus there’s only three small games to choose from, you’ll probably complete it in that time.

The clock/time is also a nice feature, and you can change between a few different level designs, allowing you to choose how you like your new Game & Watch to look as it shows you the time while levels are playing out in the background.

We did notice however that a bleeping noise happens every second to indicate the second hand, which got really annoying after a while, so we reccomend having it on mute should you want the clock to be on.

This is a nice feature and it’s obviously a nostalgic nod to the past Game & Watch. It also changes themes depending on the time of day, for example sunset, sunrise and night time.

Should You Buy The New Game & Watch?

The new Game & Watch is for collectors only. Period.

It’s an expensive product, coming in at $50 in the US and £50 here in the UK. Yes, that’s only for three games, yes that’s for a handheld that only lasts 3 hours, and yes, it’s a glorified clock.

Many people are saying “I wouldn’t spend $50 on that rubbish”, but they’re not the target audience. These things are only going to go up in price due to the small stock. In a few years time, you could easily sell this for more than $50 should you want to. That’s our response to the “gamers”.

It’s a handshake to Nintendo’s past, a warm hug to Nintendo from Nintendo, and a delightful little product to please Nintendo collectors in what has been a horrible year for us all.

Yes, it’s maybe one to pass on, but it’s a nice little treat for collectors that want to spoil themselves this Christmas.