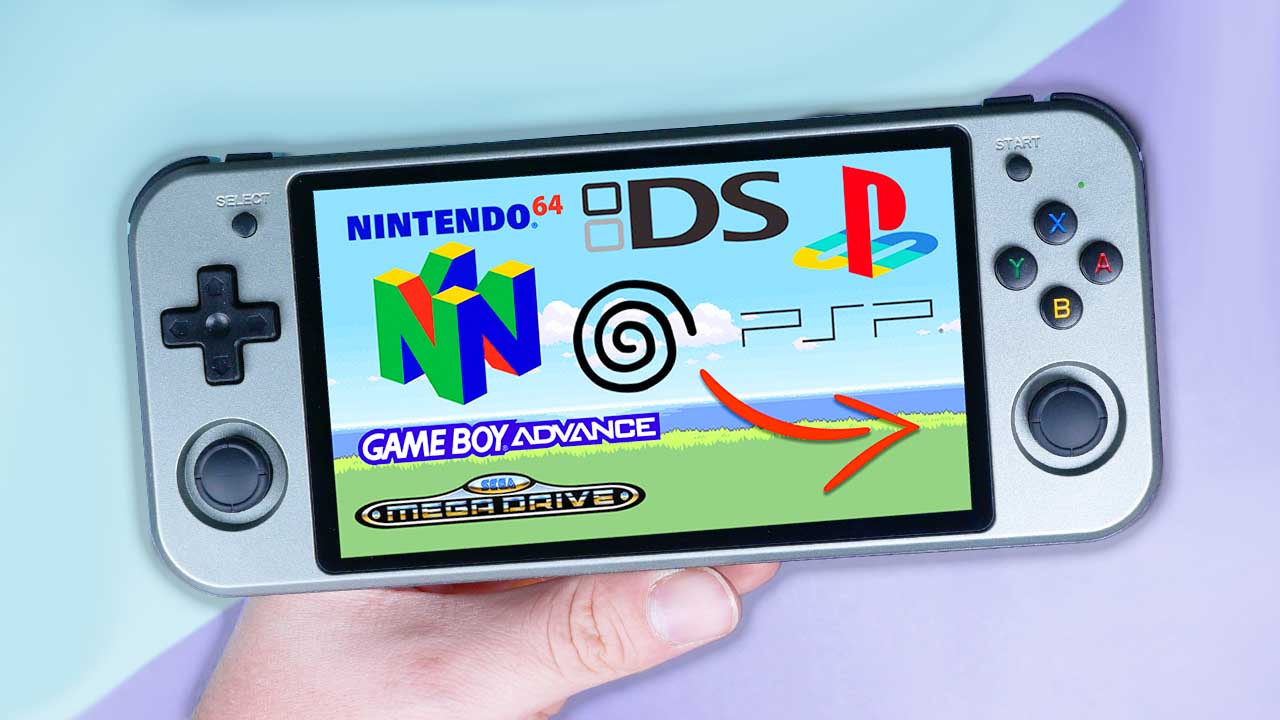 A very mediocre handheld with no new innovation

The RG552 is ANBERNIC’s latest handheld, and it’s one I have personally held off reviewing because in all honesty I was really disappointed at first.

It didn’t feel like an ANBERNIC product and due to the massive amounts of competition released over the last few months I think it’s a really good time to review it and give you my perspectives of this newish handheld.

I will be primarily reviewing the RG552 in this video but i’d also like to touch on ANBERNIC as a company too.

For those of you that are new to the handheld scene, ANBERNIC launched in 2017 with a goal of creating high end products for retro gamers, and over the years they have produced some phenomenal handhelds!

For example the RG351MP was our favourite handheld of 2021, it matched superb build quality with reliable performance at an affordable price.

But now it seems like ANBERNIC has completely changed their target audience.

With the ever increasing prices of their handhelds, the launch of this larger RG552 and the rumours that they are releasing a handheld PC this year, it’s obvious that they want to maximise their profits, and with that comes the possibility of cutting corners, annoying their current community and making their handhelds difficult to understand for newcomers.

What made ANBERNIC so great over the last 12 months is the fact that they owned their niche, created superb portable handhelds and made it easy for all types of retro gamers to understand, but the RG552 takes a step back from this, and it worries me to think that ANBERNIC could be biting off more than they can chew.

Firstly the RG552 retails for around about $230, making it their most expensive handheld yet. Out of the box it does feel like an ANBERNIC product. It has that boxy look, flat shoulder buttons and their signature back rubbers to give you some grip when playing and so that it doesn’t slide off surfaces.

This is a significant upgrade from their smaller handhelds, which entices gamers into more powerful emulation. ANBERNIC has always struggled to emulate Dreamcast well, and with this new chip it’s possible to get that level of emulation here.

Before I jump into performance I want to take a look at the RG552’s design. It’s incredibly simple, and if I were to put you in a room full of handhelds it’s likely you wouldn’t remember the RG552 at all.

For me, I don’t mind simple, especially if it’s sleek and portable, but unfortunately the size of the RG552 makes it impossible to fit into normal sized pockets, so I found myself putting it in my backpack when I want to take it out.

With that in mind, I wonder why ANBERNIC didn’t add flared shoulder buttons, or a more comfortable curved shell. I get why they did it with their smaller handhelds because they needed it to be pocket friendly, but they could have made the RG552 much more comfortable if they reconsidered using the same shoulder buttons, grips, and buttons as their previous handhelds. It’s to save money obviously but it would have been nice to see a different design from ANBERNIC as this one feels like a brick, which you don’t want when you spend $230.

That being said, it does feel like a durable handheld, ANBERNIC has always created sturdy products, and I can confidently say that the RG552 can take many bumps and bruises without problems, making it a great fit for those of you that use handhelds a lot!

The buttons used are very high quality, the analogue sticks are identical to the Nintendo Switch and I like that they used a metallic plastic shell, even if I wish they had extra colours to choose from.

I also have no problems with the screen used. It has a high resolution, great brightness and the touchscreen is incredibly sensitive too, the last thing you want on a handheld is a screen that can’t detect touch correctly.

The 16:9 aspect ratio doesn’t concern me either, for Android handhelds, and even Linux based handhelds, having borders in retro games is becoming the norm because of PSP emulation, so this is something we just have to live with.

The longer I spend with the RG552 the more I dislike the overall design. It’s far to brick like and I keep coming across annoying features that could have been easily solved.

For example, I have a problem with the headphone jack being located on top, not at the bottom, so my headphones have to wrap around and under the handheld when playing. Secondly I found myself accidentally turning down the volume a lot, due to the volume buttons being exactly where my hands press up against the unit.

Overall for me the design of the RG552 is a little disappointing, nothing screams “wow”, it just looks like any other basic handheld without any kind of character. The Retroid Pocket 2+ which is a $99 handheld has more character than this, heck even the Miyoo Mini does, so why ANBERNIC decided to simplify it I do not know, especially when there’s no means for it to be sleek and portable if it isn’t pocket friendly.

Take a look at the AYN Odin handheld for example, that’s taken design to a whole new level with its ergonomic design, LED lights, and flared shoulder buttons and that’s only $60 more than the RG552!

Now before my blood boils let’s move onto performance. Depending on where you will buy it your RG552 will either be loaded with Android or Linux, both are a pain in the backside, and both come with a wide number of problems to begin with.

For example, the Android OS will not come with Google Playstore, so you’ll have to download the APK and install it yourself, the same goes with any emulators you want, you’ll need to then go into the App Store and start downloading them.

It runs on an old version of Android 7, it’s reliable for sure but I am worried that in a year or two the OS will be so sloppy that it will retract from the overall experience of the handheld. The only benefit of using an Android OS is that the user interface is nicer to look at and you get a bit more customisation options.

The Linux OS is a lot easier to get on with though and it already comes loaded with your emulators meaning you simply have to install your ROMs onto an SD card to get going. But, with that said, throughout the months of reviewing it there were lots of little bugs that picked at me. For example some games wouldn’t run, some would crash frequently, the touch screen wouldn’t work, and the OS would randomly increase audio levels when restarting or putting it into sleep mode.

These are all very nit picky problems but I like to review these things from the average consumer’s perspective. If you want to get the RG552 to a reliable, flawless state, then it will require hours of tinkering and many stressful days getting it to where you want it.

And for a $230 handheld this shouldn’t be the case, it’s as if ANBERNIC are expecting the community to sort their problems out, and as mentioned in other videos this is becoming the norm because ANBERNIC and other handheld manufacturers are just getting damn right lazy with this stuff.

We should not be having to tinker with these handhelds in order to get the best experience out of them. They should be ready to go out of the box and it cements my thoughts on how ANBERNIC is getting lazy with their products recently.

Once you’ve set everything up, grew some grey hairs and sieved through different forums the RG552 does have some power behind the wheel.

Most consoles run really well on this thing, thanks to the 6 cores and 4GB’s of RAM. For example, N64 was a pleasure to play on, Playstation 1 felt organic on such a large screen and even heavier Dreamcast games worked impressively well too, even if I had to map the keys for most of the consoles.

The extra screen real estate helped with providing a better gaming experience, and the analogue sticks were naturally positioned to keep it feeling somewhat modern, so I then decided to jump into PSP emulation when I was mildly disappointed with the performance.

One of the only retro emulators on this device that uses the whole screen was unfortunately not doing so good, I found PSP emulation hit and miss with some games, so take that into consideration.

When gaming for a while I did notice the battery life isn’t as good as what was stated, I was getting around about 4 hours on one full charge, i guess this is because of the bigger screen and the internal fans trying to keep the hot RK3399 processor cool but nonetheless not the best battery life for a handheld of this size.

I know what you’re thinking, wow Brandon, you haven’t said much good about this handheld, and you’re right I haven’t and that’s because i’ve been lucky enough to review the Odin and the Retroid Pocket 2+ before it and those two handhelds have really impressed me, and are moving the handheld scene forward with innovation.

Whereas the RG552 just feels like a very mediocre handheld with little to no innovation whatsoever. This is a handheld for someone who wants to play around with emulator settings to squeeze out its full potential and for someone who collects ANBERNIC handhelds.

The Retroid Pocket 2+ is $99 that can emulate everything this can, and the AYN Odin is just $60 more and comes with superb build quality, a better screen, flared shoulder buttons, LED lighting and PS2 emulation.

The RG552 has entered the mid-range category a bit too early, and shows obvious growing pains due to it being rushed out of the door to get sales before the big dogs.

It’s a shame really because ANBERNIC has produced some incredible handhelds in the past. I’m hoping the RG552 is a bit of an anomaly and that they starting producing some incredible little handhelds again, but from what I have heard it looks like they’re trying to tackle the bigger handhelds which I think is the wrong route for them as there’s some very impressive competition out there.

I want ANBERNIC to focus on the pocket friendly niche and really own that category of handhelds, because we’ve seen them do so for a few years now.

Only time will tell I guess. So there you have it, a look at why you probably shouldn’t buy the RG552. $230 is just way too much to be spending on a very average unfinished handheld.

5 Best Toploaders for Trading Cards in 2022