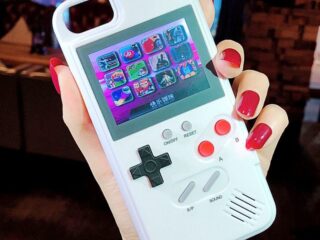 You have probably seen the infamous Gameboy case floating around Instagram recently, and that’s for good reason, it’s a great little gift.

But what many of you don’t know is that you can buy it on AliExpress for a fraction of the price that it’s usually being advertised as.

The companies, and “entrepreneurs” behind the ads you see on Facebook or Instagram are actually drop-shippers who take a products from AliExpress, triple the price, sell it to you, and then make a whole lot of profit.

So stay away from these guys, they’re trying to scam you by tricking you into changing the price through their own website store.

Pick one up from AliExpress for a fraction of the price and you’ll be impressed with what you’ve got.

How Does The Gameboy Case Feel?

The Gameboy Case is a chinese manafactured case to fit your iPhone and most Android smartphones. It comes with a build in LCD screen and a handful of games for you to play.

The 2″ screen is very low quality, but that’s what you expect from a $9 case.

The camera hole has a cutout so you can actually use it, and the case itself unfortunately has a very small lip at the front. Meaning when you place it screen down, you may get some grit, or dirt touching and scratching the screen.

Towards the centre of the device you will find your controls. It features the infamous DPAD, A/B buttons, start/select and a on/off button next to the reset switch.

Below that is the speaker grill which sounds like a distressed cat, so it’s best to keep it on mute.

The overall aesthetic looks nothing like a Gameboy in all reality, but they’ve done a nice job with making it look like a handheld at least.

When you turn on the handheld you will be greeted with a menu that showcases up to 10 different games. None of the games you would have heard of, apart from Super Mario.

Due to legal reasons China and the companies behind the Gameboy case can’t be sued for using it, hence why every company is doing it, even when it comes to the best retro handhelds too.

When you jump into the games, it’s like any simple handheld. A/B is usually your jump and shoot/action buttons and your direction pad is… well for directions.

What Games Does The Gameboy Case Have?

The games built-in are very small scale games. For example, in addition to Mario and Donkey Kong there’s archery games, running games, racing games, and a couple of fighting games, none that you’ve ever heard of.

The only game that truly matters is the original Super Mario. It works well, the screen is bright enough for you to play in the sun, and the buttons are responsive, without any delay.

Super Mario is the only selling point of this case, and the fact that the case looks like a Gameboy. All of the other games featured in this Gameboy Case is trash.

We did notice a slight bit of screen tearing which is when the straight lines on the screen don’t match up, causing “tearing” within the game. This isn’t a big deal, but we did expect it from a $9 device.

In all honesty for $9, this is a pretty decent gift for a friend or family member that has a smartphone. It’s different, plays Super Mario, and somewhat looks like one of the best retro handhelds of all time.

But, it lacks protection. This is not a good “case”. The materials used is cheap, there’s no typical materials used for drop resistance, and the lack of a front lip is just asking for trouble.

We advise this as a temporary fun case, something you put on if you’re going out to see friends, family. This is not a case that lives on your phone, because if it does, and you drop it, we’re certain it won’t do much in terms of protection.

But that said, this is one of the coolest cases on the black, and for $9, you really can’t go wrong!