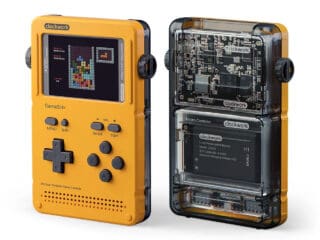 In November 2017, another handheld was released onto popular crowd funding websites. Having raised a total of $300,000 on KickStarter and $330,000 on INDIGOGO The ClockworkPi GameShell went down rather well with the retro gaming and handheld enthusiasts.

And that really is where the GameShell has massively strived, the community.

It has been 4 years since the idea for the GameShell was born, and this console is still going strong. ClockworkPi recently released a second revision of the GameShell including an upgraded ram chip from 512mb to 1gb and the addition of an HDMI mini port on top. So there is clearly still large interest in the community and one that featured in our best retro handhelds list.

You see, the ClockworkPi GameShell runs a custom made “Clockwork OS” based on the Debian 9 ARMhf and the Linux Mainline Kernel 4.1x. It is capable of running a  multiple game engines and emulator front ends, including RetroArch, PICO-8, LOVE2D, PyGame, Phaser.io, and Libretro. For the more tech-heads amongst us, that means the potential for customisation with the GameShell is limitless. For the more average retro game enthusiast, this means a few things. The large amounts of interest in the hacking community means ClockworkPI will continue to make updates and upgrades to the modular (more on this later) system. It also means the support network allows users with any questions to get answers very quickly.

The GameShell requires a bit of assembly out of the box. But not because its cheaper to manufacture components and sell as-is, as oppose to paying additional costs on building the unit. The main reason is the GameShell is modular. Building the system yourself allows you to understand the different components and pieces involved in making the system work. Its also a very simple process. The different modules are obviously then interchangeable. So when the new motherboard was released with the additional port and ram upgrade, this could be purchased from their website and swapped out.

Once the kit is together, the next thing to do is get software onto the ClockworkPi GameShell. This can be done relatively easily using FileZilla which is a piece of software you download on a computer which allows Linux files to be accessed via a windows machine. You can also upload rooms from your phone which is pretty convenient.

As we mentioned earlier, the community which has been built from the love of this console means that there are hundreds of tutorials out there for different ways to interact with the GameShell and play all of the retro games we love. So, should you get stuck or confused – just do a quick google search and help is out there!

If the GameShell came pre-built and loaded with hundreds of games like the BittBoy or the LDK Game, then this thing would be our top pick. The 60hz screen is gorgeously high quality. The games run so smoothly with very little problems at all. That being said, this is emulation so its not ever going to be 100% perfect.

The actual device feels very nice in the hands.It has a good weight to it, it feels very well built using high grade plastics. That being said, there is a few drawbacks to the visuals of this device which makes us feel this device has a very specific target audience.

The GameShell doesn’t have L & R buttons. But it does include an additional button bar which can be added to the device very simply. There is two back housing pieces included in the box, one with a smooth clear back and the other with Lego brick connectors and a couple of slots. This back piece is the one which the button array clicks onto, which is all very well and good, but then you have a pretty harsh surface which your hands are clenching on to.

Looking past this, there are two wheels either side of the device which hold the assembly together. This is a screw-less build which makes swapping out any components very simple, but how often do you need to do that? Between upgrades, there is no real need to disassemble the GameShell meaning we just have two large, unappealing barrels sticking out of the side of our handheld… hmm!

The final point is possibly the pièce de résistance, PLASTIC SCREEN! This isn’t only a plastic screen however, this happens to be the words softest plastic known to exist! (Not factually accurate). The display is housed inside a small container, made of plastic (like every other component) and then this container becomes the screen lens. These containers feel far softer than the high quality plastic used for the outside housings. We have scratches on ours where one of us wiped the screen with a cloth and the cloth has actually scratched the screen. Awful design choices.

This is ultimately why I feel this device is for a very specific amount of people. There are other devices on the market which definitely aim to be an affordable, user friendly gaming experience for the average retro enthusiast. This console however, is not that. This is a upmarket high spec device which can be used as a tool to test different software and maybe even develop games. The modular design choice certainly makes this stand out from the rest, but unfortunately most people want to unbox something, turn it on and get playing. This device couldn’t be any further from that.