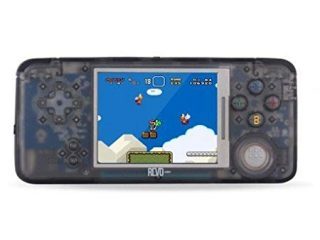 Clone consoles are starting to hit the web with force, and one that’s recently caught our eye is the Revo K101. It’s a tidy little handheld that can not only emulate your favourite retro games, but it can also play your existing catalogue of best GameBoy Advance games that you have stored away in your games cupboard. It’s part emulator, part cartridge-based handheld, and we’re loving what we’re seeing so far.

Clone consoles sound a little as though they’re shapeshifters from another dimension, albeit with less imagination than the ones who try their hand at world domination. You might be able to send Samus Aran on an alien-but-kicking adventure on a clone console, but you won’t have to worry about it eating your dog’s brain like a Metroid on a rampage. We’ve covered a few of them so far on Retro Dodo; the Retron Jr, the Super Retro Champ, and the Hyperkin Ultra Retron, to name but a few, and they’re proving to be very popular with retro gaming fans the world over.

But what’s the point of a clone console, and why is the Revo K101 using this as a selling point? Fear not, young padawans…padawanis…padawai (whatever the plural is), for we will explain all below. Keep reading to find out!

Getting To Grips With The Revo K101

So, let’s tackle the main questions first. Why does this clone console exist? Well, to understand this, we need to make a side by side comparison with the GBA. The shape of the Revo K101 might not be as iconic as the portable-purple-powerhouse we all know and love, but the button layout is pretty much the same, so there’s no major difference when playability is concerned. The biggest difference is that the Revo K101 is backlit and can be played in direct sunlight or at night, whereas the GBA had to use one of those god-awful sperm-worm lights that you had to move around with your thumb as the character walked across the screen. Sure, you could always upgrade to the GBA SP, but horizontal consoles are always more comfortable to hold. The brightness on the Revo K101 is adjustable, with 5 different settings depending on your environment – pretty swish, right?

Then there’s the emulation factor, opening up a whole new world of games for you to try out on your new console. While compiling our list of the 10 ultimate GBA titles, we discovered that there were over 1,500 games made for the console over the years. Unless you have a bank balance as large as Bruce Wayne’s, then the chances are you won’t own all of them. The Revo K101 can perfectly emulate all of them and a lot more (though we’ll get onto that in a second), storing your favourite ROMs on a Micro-SD card and the included ‘K card’. Now you can try out all of the games you never bought without having to trawl through eBay or second-hand stores.

The thing with emulators is that while you can play any game, you can’t suddenly skip to the level that you were on when you last played on a GameBoy Advance. You’ve got to start from the beginning and work your way back through, which means no perfect score on all of the Mario Kart: Super Circuit tracks, no happy villagers in Golden Sun, and no Level 70 Sceptile that you worked so hard to train. With the Revo K101, you can stick your existing cartridges in and pick up your adventure from where you left off, playing all of your favourite titles that you’ve collected across the years as though you were using the GBA itself. This handheld doesn’t use emulation for GBA ROMs, hence the clone console part of the title. There won’t ever be any framerate drop or gameplay lag, giving you the best possible playing experience.

As well as having an adjustable backlit screen, the capacity to play GBA ROMs without any issues, and external storage on an 8GB memory card (included), the Revo K101 can also emulate other games from your favourite consoles. This nifty little handheld can load up ROMs from other classic handheld and home-consoles such as the GBC (GameBoy Colour), GB (GameBoy), SMS (SEGA Master System), NES (Nintendo Entertainment System), GG (SEGA Game Gear), and PCE (PC Engine). It’s a one-stop-shop for all of your retro gaming needs, and the surprises don’t stop there.

The Revo K101 has the ability to play homebrew games, ROM hacks, and translation patches, so you can kick back and try out some of the new levels that budding games creators have built for characters such as Banjo-Kazooie and Link from the Legend Of Zelda series. Not only that, but the handheld is also multiplayer compatible with an original GBA link-up cable, so there’s no need to go out and buy any new kit so long as you kept your old accessories.

Are There Any More Differences?

The GameBoy Advance was one of the best portable consoles that I ever owned. It fitted nicely in my pocket and had good battery life, but you always had to carry around a couple of AA’s with you just in case you started to run low halfway through a level. The Revo K101 comes with a rechargeable Li-ion battery, so not only is it better for the environment, but it’s also much easier to charge up on the go. Just find a power outlet or plug into one of the best power banks on the market and you’re good to carry on gaming!

Sometimes you want to be able to play your handheld games up on the big screen, a fact that has made the Nintendo Switch one of the best selling consoles of all time. The Revo K101 has an AV out port that allows you to hook your handheld up to a T.V or projector, which is a nice added extra and one that we’ve used on some of the other best retro handhelds like the GameBoy 1UP. The K101 has RTC support for games that have a built-in clock like the GBA Pokemon series, and it can also play MP3 files while on the go too.

Let’s Look At The Build

The build itself reminds me of a cross between the ODROID GO Advance and the Retro Game 350, two brilliant consoles that you should also check out if you’re in the market for a handheld emulator. I’m a big fan of consoles that have crystal clear shells too; I like being able to see the innards of a handheld, the bits that make it tick. And while I’m not the kind of person that has the patience to put something like the ODROID GO or Creoqode Lyra together, the individual components still interest me.

The one thing that might let this console down is the buttons. They all look as though they’re spaced out nicely and will work well, but they appear a little bit on the cheap side. That could just be because they’re made from see-through plastic and might not be at all like some of the fake consoles that we’ve been covering recently, but we won’t know for sure until we get our hands on one. Let us know over on Facebook, Twitter, or Instagram if you own one!

The Revo K101 has all the makings of a great handheld console, especially with the clone console element giving players to chance to jump back into their old games and carry on with their old save files. We love the fact that both the GBA ROMs and cartridges will play just like the original console did except with the added bonus of that adjustable, backlit screen, and all of the other functions and features top the overall package off nicely.

By all accounts, the only downside to the Revo K101 is that the level of ‘smooth playability’ changes between console emulators on the device. GB and GBC ROMs play like clockwork, as do NES games, albeit with ‘hit-and-miss’ soundtracks. The GG, SMS, and PCE emulators are a little slow and sometimes fall a little short of the mark, so if you’re specifically looking for an emulator that will ace your favourite SEGA titles, then this handheld might not be for you. But, if you’re a self-confessed Nintendoid and just want a device that plays all of your favourite Nintendo retro classics, then look no further.

We’ve found the Revo K101 retailing for around £79.99 (around $100), which puts it in line with some of the top-end retropie handhelds and other handheld emulators that we’ve covered here at Retro Dodo. The only problem is that everywhere seems to be out of stock, even Amazon! We’re hoping that this is not another case of a small-time maker struggling to cope with high demand and that they’re actually just using Nintendo’s tactic of creating a massive hype before launching tonnes of units. Only time will tell, but for now, you can find these handhelds cropping up on eBay for a similar price. Happy console hunting!