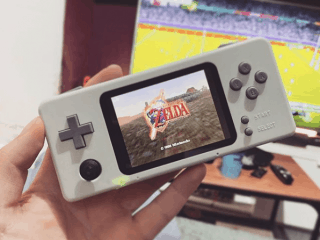 The Retro CM3 is a handheld that hasn’t caused much hype recently, not due to the quality of the retro handheld itself but due to the fact that the creators have barely even touched their advertising budget. We don’t even know if there is one!

We mention it in a lot of our best retro handheld reviews, about the lack of a “brand” behind these handhelds, and this is a prime example. The only way to find this is on AliExpress, and even then the store it’s sold on is a little shady.

But it arrived, even though there was no box, just a carrying case, covered in bubble wrap. Again, because no brand is selling this you don’t get the same delights as you would the Retro Game 350 or the Bittboy Pocket Go V2 with their official packaging.

What Is The Retro CM3?

So for those new to the retro handheld world, the Retro CM3 is a Chinese handheld that emulates old school games using downloadable ROM files.

A ROM is a game file, that needs an emulator to open, and play. So many of these handhelds including the Retro CM3 can play these games.

Cheaper handhelds will have problems such as frame rate drops, the inability to play games entirely, and poor replication, meaning the games are incredibly different, like slowed down, no audio and levels removed.

But your high end handhelds, such as this one can emulate to a high standard, and even play bigger, newer games such as the Playstation 1 and the Nintendo 64.

Because the Retro CM3 uses the Raspberry Pie 3 it can handle all of the games chucked at it, but because this person, company or whomever is selling the product is using the Raspberry Pie 3, they have had to create the console’s shell themselves, so you can see a big divide in game quality to build quality.

This is because Raspberry Pie is basically a cheap computer that can be purchased and used in affordable electronic devices, the need for companies to make their own software and processors is low due to it costing large amounts to do so, so the Raspberry Pi is a cheaper solution.

But the upside is that the Retro CM3 is a pick up and play console, no need to install stuff, no need to plug it into your PC. just press on, and get going!

How Does The Retro CM3 Feel?

The Retro CM3 is an odd looking and feeling handheld. The shell is injection moulded but even though a tough, high quality plastic has been used it still has that cheap plastic touch to it and that shouldn’t be something we mention in a $200+ handheld review.

One the front of the Retro CM3 you are greeted with a standard handheld layout that’s similar to that of the Gameboy Advance.

You have a 320×240 3″ LCD display that’s incredibly bright and crisp, it’s a delight to play on, any bigger and it would be too much for a handheld of this size.

The D-Pad and A/B buttons, as well as the start/select buttons are average quality, they won’t break, but you can tell they’re cheap additions to the Retro CM3 when you start playing with it for long periods of time.

The same goes for the analogue stick, in fact this is one of the lowest quality analogue sticks we’ve seen on a $100+ handheld in a very long time.

They could’ve easily got around this by adding a rubber cap that can be replaced, but it’s obvious they’ve cut some corners here to maximise profits.

On top you get your shoulder buttons, and only two of them.

But in all honesty, not a lot of old school games use all four shoulder buttons, so for 99% of us, the lack of these buttons shouldn’t be a major problem.

The buttons have good feedback, and raise slightly out of the Retro CM3, just enough to keep it sleek enough to chuck in and out of your pocket, we dig them.

On the left side you have you on/off switch, a very small one at that but it does the job. On the bottom you have a Micro USB port for charging, not a USB-C slot which we would’ve liked seeing as it’s a 2019 handheld, but we can live with it.

The Retro CM3 unfortunately lacks a volume wheel, so there’s no way to turn up or down the volume externally, so you’ll need to do this within the software.

Again, another corner cut in the design. *sighs*

The 3,700 MAH battery is strong too, and is slightly bigger than the average handheld, making it a trusty device for those long haul flights or weekends away.

But the use of cheap plastic and lack of high quality buttons makes it feel less superior than some handhelds half the price. It’s not the best looking nor the best feeling handheld out there, but it’s quite the opposite for gameplay.

How Does The Retro CM3 Play Games?

Very, very well. You might have thought the start of this review was being a little harsh towards the Retro CM3, yes, but it’s the truth, the build quality is poor for its price tag.

But, the emulation and power in this thing is great, and is probably one of the best RetroPie handhelds we’ve used in a long time. So here’s the section where we big up the handheld!

Specs wise the Retro CM3 is running Rasberry Pie CM3 Lite, with 1.2GHZ CPU, 1GB RAM, on a 3″ display. Because it uses a Rasberry Pi, the Retro CM3 becomes a very powerful handheld and with that comes the ability to emulate perfectly for up to 6 hours straight.

It can play a wide number of games such as SNES, NES, Gameboy, Wonderswan, PSP, PS1, Nintendo 64 and a lot more. Because it’s using RetroPie you can also customise a lot within the handheld, we changed the UI to a Switch look a like, this makes it look a little sleeker, but you can even make a menu yourself should you know how to code.

For us the Retro CM3 came pre-loaded with a TF card with hundreds of games installed. Now we know for a fact that’s illegal to sell a handheld with already loaded games, but if you do get a TF Card with games, think yourself lucky because they could get in trouble for doing that.

But we secretly love it, shhhh!

With this comes the ability to play games straight out of the… oh wait it didn’t come in a box, it came wrapped in bubble wrap when we bought it.

Now it’s hard to use to “review” its gameplay because it emulated almost every game with ease. Gameboy, SNES, NES and all your “older” 2D games will run with no hiccups at all.

The same goes for most N64 and Playstation games. We did noticed some frame drops now and then on the PS1 emulator, but it was barely noticeable.

You’ll get no screen tearing, dodgy saves or delays in gameplay, the Retro CM3 nails it 99% of the time.

But saying that, some Gameboy games and PS1 games did crash, and we had one freeze too. A simple restart solved this problem but it was annoying.

We don’t think this was the Retro CM3’s problem, we thought it could be a bad ROM, so we reinstalled the GBA ROMs and it worked, but we did get another freeze on a PS1 game. So it is a issue, but rarely happens, it’s happened to us twice in three weeks. So very irregular, but it is there.

Save states and load states work as they should and save at the exact frame that you save at. So jumping into the game and loading the state will work well, so no more having to get to a check point before hopping off the bus.

The buttons and triggers all worked well so did the analogue stick. Some of you may want two analogue sticks, but if you haven’t noticed by now that’s not happening. We didn’t feel the lack of the second one to impact our gaming experience at all.

Overall we love the Retro CM3’s ability to emulate to a near perfect standard. We trust this device beyond most we have reviewed, you’ll know there will be no problems on the go when you chuck this in your pocket.

Combining that with a nice display and above average comfortability it makes for a nice N64/PS1 Emulator. However, the $150-$200 price tag puts this in a whole different category. It honestly feels like a $50 handheld.

The build quality is what is pulling down our score. You can’t expect people to pay $150 for a handheld that feels like a $2 Kinder Surprise. They really cut corners on the appearance and build quality, and it’s a real shame, as this could’ve been up there with one of the best retro handhelds of the year.