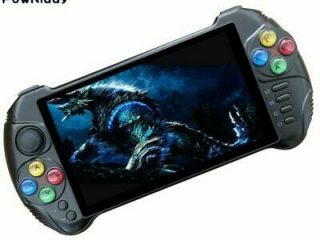 Android handheld consoles are more popular now than ever, and the Powkiddy X15 is raising a lot of eyebrows in the retro gaming world. Some of the best retro handhelds that we receive through the Retro Dodo office door run with an Android OS due to the many ways in which you can emulate your favourite games on the firmware. They might not have the biggest shelf life in terms of ease of playability once the OS becomes outdated, but while they last, they provide a powerful slice of nostalgia at an incredibly affordable price.

We’re making it our mission to review, play, and find out about every handheld console on the planet; it’s a tough job, but someone’s got to do it! The Powkiddy X15 is the latest AliExpress special to land in the spotlight, a portable powerhouse with a design that pays homage (rips off) some of the best consoles of our time. Here’s everything that you need to know about this retro-player, and more importantly, our professional opinion on whether you should buy it.

Getting To Grips With The PowkiddyX15

Here it is in all of its glory; the Powkiddy X15. If we asked you to look at the picture above for 5 seconds and then write the first three consoles that come to mind, what would you put down? For me, It’d have to be; the SEGA Game Gear, the Atari LYNX, and the Nintendo Switch. See what I’m saying? Ok; hear me out.

There are serious likenesses to the SEGA Game Gear, or rather, what the Game Gear might have gone on to become had it managed to take a chunk out of Nintendo’s winning formula. It looks like a natural evolution of SEGA’s maiden voyage into the portable gaming realm and, seen as though the Powkiddy can play all of the best Dreamcast games with ease, I like to think that my little theory might have been right in some alternate universe. The console grips, the colour, and the overall shape of the handheld also remind me strongly of the classic controller that I used to play all of the best Sega Genesis games in my collection too, albeit with a couple more buttons. The X15 has that same kind of central-wide screen as the Atari LYNX, and a touch screen like the endlessly copied Nintendo Switch. The number of fake consoles that we’ve seen trying to imitate Mario’s mobile house never ceases to amaze us; some of them are just diabolically bad! All of the above will make sense at the end of the article; I’ve been reading a lot of Sherlock Holmes lately, so just humour me for a little bit longer.

So what can the Powkiddy X15 do? For starters, it’s an Android 7.0 handheld console with a 5.5-inch IPS screen. This is the exact same size as the Nintendo Switch Lite which I’m sure many of you have either used or own, so you’re not going to be squinting through a magnifying glass when you’re looking at your games. It comes with two speakers that apparently promote high sound quality (though we wouldn’t recommend throwing away your BOSE speakers just yet), and a 3000mAh rechargeable battery for gaming on the go. That might sound as though it’s pretty hefty, but compared with the 9000mAh in the GameBoy 1Up, you might not get as much bang for your buck as you might hope.

The Powkiddy X15 is a button/touch screen hybrid, with many games promoting the same touch screen controls that you might have access to while playing games on an Android phone or tablet. Essentially, that’s what this thing is; it’s just like a big mobile with controllers on the side that you can use to browse through movies, select your favourite songs, scroll through files, play PUBG online, and more. You can download all of your favourite emulators and ROMs, and there’s plenty of storage for your favourite titles on the 128gb Micro-SD card.

I have to say that I’m not a massive fan of playing a game with the buttons up on the screen; you should be able to either play with touchscreen controls or get rid of them entirely. They’re distracting and unnecessary. I’m playing with handheld controls, so why are they still there annoying me. I swear the world is just trying to make me angry sometimes…

In terms of playability, the Powkiddy X15 has aimed high but fallen short of the mark. Control-wise, it’s not too bad. The joystick is similar to some of the other handhelds that we’ve been testing out recently and promotes L3 functionality, which is great for games where strafing or crouching are a must. The D-Pad and ‘A,B,X,Y’ buttons are essentially the same, just mapped differently, and both look and feel how you might expect from a reasonably-priced Chinese console. Nintendo changed up the D-Pad on the switch, so now everyone’s doing it. Stick to what you know, guys; people love that chunky plus button, so give them what they want! The X15 also has shoulder buttons on either side which seem to be sensitive no matter where you press them, and although a little cheap-looking, they seem to do their job well.

One of the main features of this console that annoys me is the lack of a second analog stick. Instead of having a start, reset, select, and off button underneath your right hand that will more than likely cause you to close down your game halfway through a crucial level, why not include a second stick for changing the camera angle as you move. You can use the touchscreen to change your camera angle, but you can’t do it at the same time as your character is moving, which leads to jerky, cumbersome gameplay.

As far as framerate, emulation, and button mapping go, this handheld does pretty well. Considering that you’re most likely going to be playing retro classics and Android applications, you shouldn’t really notice any problems. The Powkiddy X15 handles Dreamcast, N64, and PSP games pretty well, and can emulate your SNES, GB and GBA games with ease. You’re not going to be able to play anything with a mammoth world map, but that isn’t necessarily a deal-breaker. The console comes with all of the buttons pre-mapped so that you can jump straight into cruising through your chosen retro title, but you can also change them around if needs be in the setup menu.

What Other Features Are There On The Powkiddy X15?

As with many other android handhelds and some of the best RetroPie handhelds currently doing the rounds, the Powkiddy X15 has some cool extra features that prove to be the consoles saving grace. On the top of the console you’ll find a HDMI out for playing your best SNES games and best GameBoy Advance games up on the big screen. This is, as you’ve probably read in other similar articles that I’ve written, a nice touch that I look for in new portable consoles. I like being able to play both handheld and in home-console mode (which is why I love the Switch), so having the ability to hook up to a TV or projector gets a thumbs up from me.

There are two USB ports for plugging in external controllers for multiplayer modes, and you can also hook up Bluetooth remotes for wireless play. There’s a headphone jack for when playing on the bus or underneath your office desk, and it’s one of the only handhelds we’ve seen that can do three-player multiplayer.

I’m going to level with you; it’s not great, but it’s not terrible either. The Powkiddy X15 sits in that no-mans-land of ‘ok consoles’ that is slowly recruiting more citizens by the day. This handheld is essentially the same as the X18, which also looks a lot like the GPD XD Plus, which in turn is very similar too…you get the idea. The X15 and the X18 are basically the same machine bar the overall design, so it all boils down to whether you prefer clamshell devices to open-faced machines.

The description on AliExpress claims that the design is one of ‘innovative fashion’, which is why I made such a big deal in comparing it to all of the other consoles at the beginning of this article. It’s all been done before, many times, but the formula still works and the results are good. You can play your favourite games with little-to-no hassle, and the three-way multiplayer functionality is a nice touch, but the design is far from groundbreaking. Personally, I think it’s a little on the chunky side, and I would much rather spend my money on the Retro Game 350 or the ODROID GO Advance instead.

The element that saves this console from falling to the bottom of the bargain bin is the screen; it’s big, it’s bright, and it’s easy to use the onscreen emulation buttons should you wish to go full-on touch mode. You can read an e-Book clearly on this device (because all nerds love games and books – it’s a fact), and the menu settings and game titles are easy to navigate.

The Powkiddy X15 will set you back $96; that’s with a 25% discount, although there always seems to be a sale happening on AliExpress. That’s not a bad price for the amount of emulation that you get, especially compared to the CreoQode Lyra or the upcoming GPD XD 2, both of which do practically the same thing for over twice the price. If we had to give this device an overall rating, it would be slap bang in the middle; it doesn’t excite us, but it doesn’t make us want to smash all of our grandmother’s finest china either. It won’t win any awards for ‘innovative fashion’, but should kill boredom for an hour or two at least.