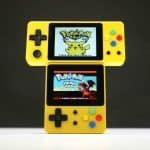 The LDK Landscape is the latest handheld console on the block, and if you didn’t pick up its little brother the LDK Game due to its small form factor, then the LDK Landscape might be the slightly more comfortable handheld that you’ve been looking for.

What Is The LDK Landscape?

The LDK Landscape is a portable retro gaming console that can play up to 30 different emulators allowing you to download and install your favourite ROM’s. For those of you that are new to ROM’s they are digital files that replicate old retro games, for example you can download a Pokemon ROM that will basically be the entire game.

But, you legally have to own a copy of the game to download the ROM, or Nintendo won’t be happy. You install the ROM’s on a SD card and simply slot it into the LDK Landscape to play them.

The system used in the LDK Landscape is Linux(OpenDingux), so for those of you that want to mess around with the software, you can as it’s an open source system, however that’s not what we used it for, we used it simply for ROM’s and ‘straight out of the box’ gameplay.

The LDK Landscape console itself is about 13cm long, 9cm high and 2cm thick, making it small enough to chuck in your back pockets but large enough to be able to play it for an hour or so straight. It comes with a 240×320 screen, a dual core CPU, 128MB of RAM and 16GB of internal storage. That’s the standard for handheld emulators these days, but the 1000mah battery is a nice size, and slightly above average for these kind of handhelds.

Around the LDK Landscape you have a wide number of buttons, you have your basic on/off, volume, d-pad and ABXY buttons, but what’s different with the LDK Landscape is that it comes with a neat little analogue stick. At first, we absolutely loved it, but we soon noticed how small it was, it worked well, did what was needed and to be honest, it’s a nice feature and we’d like it on all handhelds that we get hold of in the future.

The LDK Horizontal is made from a simple and low quality plastic but it can take drops and bumps quite well. It’s the plastic that feels strong, but in reality it’s just a shell to hold the electronics and it will likely break if you sat on it (on a hard surface) or stepped on it for example.

Whereas its competitors like the Bittboy Pocket Go have a much better quality shell to it. Unlike the light, thin shell everything about the exterior of LDK Landscape works perfectly, feels rugged and has a nice bouncy feedback to it.

The buttons are fast, they barely move when playing and the new analogue stick is has some force behind it, unlike the common light, easy to break ones we find on fake consoles a lot of the time.

They’re quite flat too which is a bit boring, we would have liked curbed shoulder buttons like the Retroid Pocket 2.

Around the sides of the LDK Landscape you have a number of things to play with. Towards the right hand side you have the volume rocker and your on/off switch, coming up to the top a Micro USB charging port that can fully charge the unit in just over an hour giving you 3-4 hours of game time.

And then on the left side you have to extra buttons that do a wide range of things depending on what menu/game you are in. It’s mainly used for the brightness, but in some emulators it can be a way to get to the settings so that you can adjust screen size, saves states and more.

The screen is a delight to play on, it’s bright, has great viewing angles and it’s some what crispy. It’s identical to the one used on the LDK Game, so it comes in at 240×320.

We had no problems with this screen at all, it’s big enough to see everything clearly, and it’s near enough to the old Gameboy Advance which makes it a nostalgic pleasure when playing Pokemon.

How Does The LDK Landscape Play Games?

It runs majority of the games at a playable, fluid manner. The Gameboy ROM’s work perfectly and comes with save states, allowing you to save at the exact frame and load it back whenever you want, this makes playing Pokemon a lot of fun on these things.

The only emulator we found that struggled with playing games was the Playstation 1 emulator, the LDK Landscape comes with a small dual core processor that can’t really handle the power needed to play big games like Spyro The Dragon or Crash Bandicoot.

It would drop to an average of 15 frames per second, and the audio would crack majority of times, making it quite simply impossible to play, we’re not 100% sure why they’d even add this emulator into their console.

The analogue stick works great with most games too, we thought we’d be switching between that and the DPAD quite often, but in fact we found ourselves using the analogue stick majority of the time.

And by long periods of time you’d want to play this for no more than a few hours or your hand will feel like it’s been hammered to pieces. I

It’s not a comfortable handheld at all, but it’s playable. So for anyone wanting to play for hours on end, you might get a little uncomfortable after just one.

The LDK Game was only launched at the start of 2019, and already the team have released the LDK Horizontal for those that wanted a Gameboy Advance look-a-like.

It’s quite impressive how quickly they pumped this out, but there are signs showing that they rushed it.

The design works, it’s a lot more comfortable than its little brother, and the addition of the analogue stick is welcome.

The buttons are bouncy, the screen bright, the speaker loud and the ability to play ROM’s is great, even if it can’t play PS games properly.

This is a prime example that the retro handheld emulators market is forever growing and expanding. T

Tldkhey’re getting faster, better build quality and crispier screens, the LDK Landscape unfortunately falls short in a light of areas. Corners have been cut, emulation is average, but the price point hasn’t reduced, so our score is quite low.

A nice little handheld, with a bright screen and a new analogue stick but it lacks the power for PS emulation at a price where it should. We’re giving it 4/10