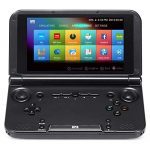 We have a lot of mixed feelings about the GPD XD Plus, it’s a clamshell Android device that’s known for playing games, primarily retro games using emulation. If you’re a fan of the Nintendo 3DS, but want something that can play all of your old ROM’s then the GPD XD is certainly worth looking at if you don’t mind breaking the bank. GPD are known for creating small portable laptops and android devices, they’re based in Shenzen, Honk Kong and have a good rep of keeping gamers and businessmen happy. But the competition is slowly crushing them and you can tell, they’re not sure how to handle it.

The GPD XD Plus is no small handheld, it’s portable, but not pocket portable. This comes in at the same size as a Nintendo 3DS, chunky, but portable. It comes in a wide number of colours too, our favourite is the deep red which we have owned… twice. This is because one of them just stopped working after 3 months, and there was no way to contact GPD for a response or even a refund. We purchased another one and it’s still alive to this day… just.

But before we get into that, let’s talk about the design of the GPD XD Plus. Once opened you are greeted with a very clustered layout, and one that looks like it’s game from the mid 2000’s. One of the best features about the GPD XD Plus has to be the large 5″ screen, this thing is an absolutely blast to play on, it’s bright, works well at night and packs a punch when it comes to nostalgic colours. Moving down to the control panel you have two analogue sticks that are actually quite nice to play with, they rubberised, a great size and placed well on the console. This combined with the screen and design of the clamshell makes it easy to play for long periods of time. All of what we just mentioned above is probably the only decent features about the handheld, the review goes downhill from here, apologies.

Alongside the analogue sticks you have your L3/R3 buttons, volume, power on, and settings/controller buttons to set up your play style. Below the your D-Pad and ABXY buttons which are pretty average, and feel like any other Chinese handheld you’ve played with. At the bottom you get some terrible branding and your options buttons such as start/select, back and home buttons. In the middle of the GPD XD Plus you have absolutely nothing, just a giant black section of the handheld which looks as if something is missing.

There’s no branding on the top, or the bottom which we like as it goes well with the high gloss red and blue versions. On the back you get your average ports such as Micro USB, HDMI, SD Card slot and more. No USB-C like the Retro Game 350 which is slightly disappointing seeing as this is more expensive than a Nintendo Switch Lite.

The overall feel of the GPD XD Plus is actually pretty good, it fits an adults hand smoothly, the buttons are easy to get to, the triggers located nicely and everything just fits the average adult hand, nothing feels awkward to get too. This is why clamshells have been so popular because they’re comfortable and somewhat portable at the same time.

Our only mention of the design is it’s port button layout, it just looks like buttons have been thrown on the face of the handheld with no real idea of how they wanted it too look. They probably say in their meeting and said “make it look like the rest”. The GPD branding on the bottom look bad, the speaker grills are completely in the wrong place, and the top buttons are too close together so we found us turning UP the volume instead of DOWN many of times. It’s just not a great looking device.

The GPD XD comes with 6000MAH battery which is plenty to play for a whole day. Because of the lack of a touchscreen that most smartphone gamers use, it saves a tonne of battery life compared to if you were using your iPhone, so this allows for considerably more playtime, and this is why a lot of smartphone gamers move over to these handhelds, because its just a lot more comfortable game time.

How Well Does The GPD XD Plus Perform?

First we need to mention that this is an Android device running Nougat, an already outdated OS that is currently being updated every few months but Android will stop to update in a year or so. Once the updates stop, this device will be near unplayable due to the laggy’ness of old Android operating systems. You will be able to play your games, but expect major frame rate drops and long load times. Actually expect them now if you’ve picked one up because the emulation isn’t the best.

So the majority of this review will be talking about the emulation from the GPD XD, a way of playing old retro games from an SD card. For those that stumbled across this review to find out how it runs android apps, and general tablet stuff, we’re sorry but this review isn’t for you. This review is aimed at gamers who are primarily buying this to play some Android games and emulators.

To play ROM’s you will need to go into the Android app store to download an app that can emulate, you will then need to install ROM’s onto your SD card for the app to read in able to emulate them. If you don’t know how to install roms then we suggest looking it up online, we have a guide for you. Most android games will run okay on the GPD XD Plus, as it comes with a MT8176+PowerVR Hexa-core processor, 4GB RAM and 32Gb Storage. This sounds quick, and it is, but paired up with the Nougat OS it feels kind of sloppy at times. Yes you can play PUBG, yes you can play Fortnite on it but not smoothly. You will come across frame drops, plenty of crashes and lots of wifi drops. Those games will soon be unable to operate on the nougat OS because as mentioned it will be outdate within 2020.

For those of you like myself who picked it up purely for emulation you might be a little disappointed. It can play most ROM’s fairly well, but you’re depending on a good quality app for emulation, and most on the android store apps especially the free ones lack quality emulation. And by this I mean you’ll get frame drops, poor sound quality and terrible aspect ratio, with limited saves. There’s good ones on the app store but be prepared to pay some money for it.

You can play most old school games on here, Gameboy, SNES, NES, Mega DRIVE, PSP, Dreamcast and more. You’ll have to learn how to map your keys when you download your ROM’s and that can be quite tricky for someone new to these kind of handhelds. Nothing is easy on the GPD XD, everything takes some research. You might read elsewhere that the GPD XD Plus can play PS1, PSP N64 and Dreamcast games, yes it can, but in . no way well. If anything it’s annoying to play. The handheld is powerful, but not powerful enough for those consoles. If you stick to the Gameboy, Mega Drive, SNES, and NES emulation you’ll be loving life on this giant 5″ screen. And that’s all we can advise to use this for. The small console emulation. But that’s why we’ve ranked it so low, because $200-$250 for a console that can just about play those ROM’s well is an absurd amount of money to play, especially if it’s through a slow Android OS. You might as well save yourself $200 and buy a Bittboy Pocket Go which actually emulates those games just as well.

Look, our review makes it seem like we hate the handheld. It’s not a bad handheld, it’s just incredibly overpriced for what will be outdated in 12 months. The GPD XD Plus goes for the same price as a Nintendo Switch, just let that sink in for a while… This was a solid console 4 years ago, now in 2019 its not even worth wiping our backside with. Yes, it can play your ROM’s, but not the big boys such as the N64, Dreamcast and PSP games. The handheld feels great but it’s poorly designed. It can connect to bluetooth wireless controllers which is pretty cool, but in all honesty, not many of use them.

We advise not to pick up the GPD XD Plus. 2019 has been rough on the handheld, with the likes of the LDK Horizontal, and the Bittboy Pocket Go V2 coming out, it just goes to show that other companies are doing it so much better for just a fraction of the price. And the fact that GPD ignored us once one of our consoles broke just goes to show what their customer service is like should anything goes wrong with yours. We can’t recommend that to our community, no way.

It’s a poorly designed, outdated handheld that’s been smashed out of the park by competition at a fraction of the price. Rest in peace GPD XD.