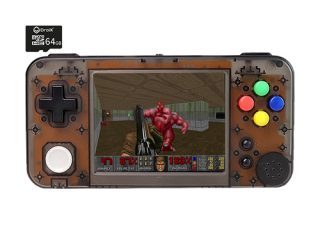 The Game Kiddy 350H Handheld is one of the most powerful $80 Chinese handhelds on the market, making gameplay on the smaller emulators incredibly fluid.

Sure, it’s powerful, but can the build quality match up to the hype generated by this thing?

We’ll discover the answer to that in a second. What we can be sure of is that the Game Kiddy 350H is directly competing with the Bittboy Pocket Go V2 and the Retro Game 350, firmly securing a place in our compendium of the best retro handhelds of all time.

The Chinese handheld market can be pretty daunting if you’re stepping into it for the first time. They’re continually growing in popularity because of our never ending craving for playing old games on the go. Not only that, but we all want to play our favourite games without having to shell out loads for consoles on second hand sites.

It’s worth noting at this point that downloading ROM files is 100% illegal, but no one seems to have told the makers of these handhelds this… or maybe they just don’t care. That means that you will get some handhelds shipping with games installed, and Nintendo definitely don’t like that!

The Game Kiddy 350H was originally meant to launch internationally to the public in the last quarter of 2019, but with the surge of competition, it came late and is now officially available here.

Unfortunately due to the late arrival many of the community have already picked up other retro gaming gifts and handhelds for Christmas, so Game Kiddy may not see as many sales as they were hoping. The reveal of the Analogue Pocket probably didn’t help either!

The Game Kiddy 350H in our personal opinion is a very plain looking handheld, as if it was released back in 2016. On the front of the handheld you are greeted with a 3.5” 320×240 IPS display which we’ll admit is a lovely screen to play on, and just the right size to feel immersed.

It comes in a wide number of colours, grey, yellow, blue, charcoal which is slightly transparent, and a full transparent edition too.

The coloured variants are revolting, and looks as if it came straight out of a cereal box, but the transparent versions however to look kinda slick, as it shows the internal organs of the Game Kiddy 350H.

Alongside the IPS display, you have a D-pad and an analogue slider that sits flush with all of the other buttons, so it won’t snag in your pocket when you’re playing on the go.

The ABXY buttons are multi-coloured which is a nice feature, and below them is the the start/select buttons.

On top of the handheld is where you have the shoulder buttons, only two of them that is, so some games, especially PS1 games, may be impossible to play. We’re not sure why they held back on this, but in reality, two shoulder buttons will be find to play 90% of the games required.

These shoulder buttons feel absolutely incredible, there’s a soft feedback to them that doesn’t click every time you press it, when you press them, you have to press them hard and deep, which feels perfect when playing fighting games.

Between them you have all of the ports, and this is the only place for the ports, so the sides are nice and minimal. Here you will find a headphone jack, a micro usb port for charging, your on/off button and a Micro SD card slot.

Unfortunately the Game Kiddy 350H not only lacks a physical volume wheel, making it awkward to change when in a game, but the location of the speaker is right under your palm. S

o when you’re playing your best Neo Geo games, you’ll find the sound quality is poor and muffled, which is a very disappointing factor of the Game Kiddy 350H. We would’ve liked the speaker to be located on the back, or at the bottom of the handheld instead.

And that isn’t the end of the flaws! One feature (which is most likely a personal pet peeve) is the printing of the model number, and product details on the back of the battery case.

They’ve printed giant white details on the back of the handheld, making it look incredibly unprofessional and cheap.

Heck, even the recycling logo is on the back for everyone to see! I know, this is a legal request, but could they not of had it on the inside of the battery door, or on a piece of paper within the box, or even slightly engraved so its hard to see?

This makes it look incredibly cheap and for us, ruins the whole design. However, that aside, one good design detail is the curved edges of the case, there’s no sharp edges, and the matte finish combined with the curves makes it feel very, very comfortable in the hand and it compliments the button placements well.

How Does The Game Kiddy 350H Perform?

The Game Kiddy 350H holds a 1.9GHZ MIPS CPU with 128MB RAM a 2,300 MAH battery and a 32GB Internal SD Card. These combined makes it one of the most powerful $80 handhelds on the market, and you know it when you start messing around with the PS1 emulation.

In fact the emulation is so good on all of the consoles that it was close to becoming our handheld of the year as we received it on 20th December 2019, so it could’ve just made the cut. We noticed fluid gameplay, incredibly high frame rates, 0 screen tearing and crispy clear audio.

You will notice some stretching on some emulators, but as per any retro handheld, you can set it to original aspect ratio should you wish. This is the same for save states, you save at the exact frame, not checkpoints, so when you eventually do come back, you’ll load from the exact point you left off.

When your Game Kiddy 350H is in sleep mode it keeps the green notification light on, this is a nice feature to let you know if its in sleep mode, or switched off.

Battery life on the Game Kiddy 350H is pretty average compared to its competitors in the same price range.

We opened it up to check the battery size and Game Kiddy could have absolutely added in a bigger battery, but they wanted to keep costs down.

A 3,000 MAH battery would have been divine, but we can cope with the 4-5 battery life on this thing with no problems at all.

There is no Nintendo 64 or Dreamcast emulation like the Powkiddy A19. It just hasn’t got the power, or the space for buttons to emulate them, if it did, it would beyond the $100 price tag by a long way.

The Game Kiddy 350H is a phenomenal handheld. It’s a handheld we can take out on long trips, knowing it won’t fail to power the games we throw at it. It’s our most reliable handheld. But what we want from a handheld is not just power.

We want quality. We want it to feel expensive in the hand, if anything, it feels quite the opposite.

The cheap shell, poor speaker location, 2 shoulder buttons and lack of volume wheels is what has cost this to be 3rd place in our best handhelds of the year. It was so close, in fact, we held of this review for an extra week just to confirm it ourselves that we wanted to rate this handheld what we did.

The Game Kiddy 350H will play your games flawlessly, but it feels like Game Kiddy has cut corners to keep their profit margins high. For those of you that want power, and don’t mind low build quality, then this is the handheld for you.